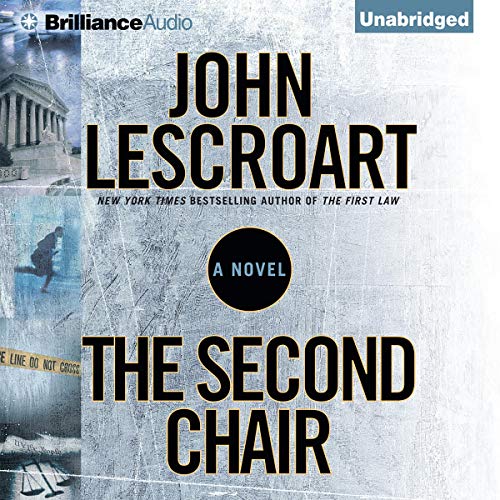 John Lescroart (Author), David Colacci (Narrator), Brilliance Audio (Publisher) & 0 more
4.6 out of 5 stars 268 ratings
See all formats and editions
Sorry, there was a problem loading this page. Try again.
Dismas Hardy is finally on top: as a managing partner at his thriving, newly reorganized law firm, he's a rainmaker and fix-it guy for clients leery of taking their chances in a courtroom. Now Hardy's up-and-coming associate, Amy Wu, brings him a high-profile case: Andrew Bartlett, the 17-year-old son of a prominent San Francisco family, has been arrested for the double slaying of his girlfriend and his English teacher. The D.A. wants to try him as an adult. Determined to get the case into juvenile court, and overwhelmed by the mounting evidence against her client, Wu asks Hardy to sit second chair for her in Bartlett's defense.

As the Bartlett case moves swiftly to trial, another series of murders grips the city. An unseen killer seems to be shooting citizens wantonly, and as fear and anxiety build around the Executioner (as he is quickly dubbed in the ensuing media frenzy), Abe Glitsky, the newly promoted deputy chief of the Investigations Bureau, leads the desperate hunt to stop him.

With the city on the verge of panic, Hardy and Glitsky are locked in a race against time - to save a client and to catch a murderer. But nothing is what it seems, and as both men's cases twist and turn to their shocking conclusions, the very foundations of San Francisco's legal system will be shaken to the core.

Special invitation from Audible!
Learn more about Membership
List Price: $28.67
You Save: $9.68 (34%)
By completing your purchase, you agree to Audible’s Conditions Of Use
Sold and delivered by Audible, an Amazon company
Share

4.6 out of 5 stars
4.6 out of 5
268 global ratings
How are ratings calculated?
To calculate the overall star rating and percentage breakdown by star, we don’t use a simple average. Instead, our system considers things like how recent a review is and if the reviewer bought the item on Amazon. It also analyzes reviews to verify trustworthiness.
Top reviews

Jonathan Wood
2.0 out of 5 stars Unappealing characters, holes in the plot
Reviewed in the United States on May 4, 2019
Verified Purchase
This is the first novel in the series that I read and it was probably a mistake to jump in the middle because much of the story was rehashing what had happened in previous books, which made it hard to follow at times. I did finish the book but I didn't really enjoy it. First of all, none of the characters appealed to me. I never felt I'd like to know any of them better. There has to be a likeable element to characters and these people just didn't have that. Secondly, I was annoyed at how certain parts of the murder investigation were left out. One example (spoiler alert) was that no mention was made of the suspect having a gunshot residue test made. I thought this was standard operating procedure for anyone involved in a major crime where a gun was used, but maybe not. I know he wasn't a suspect at the time, but I still thought it would have been done just to clear him if nothing else. Another example (again, spoiler alert) was that it was never clear about the timing of the only witnesses to the alleged murderer leaving hearing a gunshot. Did they? When? It was something I wondered about early on, an obvious omission. Why wasn't this brought up? Well, because that would have ruined the suspense, of course. I doubt that I'll be buying any more books by this author.
Read more
2 people found this helpful
Helpful
Report abuse

Perry B. Alers, aka peebee
5.0 out of 5 stars Still going strong
Reviewed in the United States on July 24, 2014
Verified Purchase
I have managed to read most of the Dismas Hardy/Abe Glitzky books in sequence, but broke off after The First Law, whose plot departed dramatically from the usual courtroom conflict format of its predecessors. It ended with an actual gun battle. I have since wondered how Mr.Lescroart was going to handle the aftermath, and now I know. Both Dismas and Abe were deeply affected by the incident, and their characters have subtly but permanently changed. In this outing, Dismas' law firm, represented by a new character, Amy Wu, takes on a rich-kid client charged with murder. Amy's strategy at first is to have him admit to the crime while he is still a juvenile, which would mean a sentence of only eight years; he would still have a life to live when he got out. However, he vehemently protests his innocence, and small clues begin to support his claim. Dismas, throwing off a threatening lethargy, gets interested, and becomes not only Amy's "Second Chair" at the inevitable hearings, but starts actively pursuing the case on his own. Abe, now the Deputy Chief of Investigations of the San Francisco Police Department with many other fish to fry, has his doubts as well. Lescroart has always been skilled at keeping this storyline going without cluttering it up with any more backstory than is necessary, and his regular cast returns the favor by operating in real time: children grow up, jobs change, and sometimes a principal dies. If this is your first Hardy/Glitzky, fear not; you'll soon feel quite at home.
Read more
5 people found this helpful
Helpful
Report abuse

John R. Linnell
5.0 out of 5 stars The Second Chair is First Rate!!!
Reviewed in the United States on February 18, 2004
Verified Purchase
Those of us who have reveled in the discovery of this author and his Dismas Hardy/Abe Glitsky novels have been with these two old friends for a long time and through some hair raising and heart breaking times. Hardy, who once was a San Francisco cop is now the managing partner of his San Francisco law firm. Glitsky who was a homicide detective for the SFPD is now a Deputy Chief. Yet, for all their lofty current positions, they are dragged into a compelling drama by the events that are going on around them.
Amy Wu is an associate in Hardy's firm. She is dealing the the four month old death of her father by looking for love in all the wrong places when she receives a call from a wealthy couple who's son she has represented in a minor juvenile matter to inform her that "Andrew is in trouble again." That, it turns out, is an understatement.
It seems that Andrew was rehearsing for the school play with the teacher who was directing the play and with his girlfriend. The play is "Who is Afraid of Virginia Woolf." Andrew and his girlfriend have the leads. While taking a break from rehearsing, Andrew takes a break to go for a walk to work on his lines. When he returns he finds them both shot to death.
Two months later the police have decided to charge him with murder. His parents (actually Mom and Step-Dad) are horrified. "He said he didn't do it," says Mom. "I know he didn't do it." ..."Andrew is not that type of person."
After reviewing the police evidence Amy Wu is not so sure. It turns out that in the past Andrew expressed jealosy of Mr. Mooney, the teacher and his relationship with his girlfriend. He even wrote a short story entitled "Perfect Killer" in which he details how a young man who is jealous of his girlfriend and a teacher plots to murder them and how he does it in such a way as to avoid guilt. He shares the story with his best friend at school. He even starts to bring his step father's gun to school with him in a knapsack. Then there is the yelling and arguing that those living over Mr. Mooney's apartment hear along with crashing and banging down below. When they look out of the window to see what is happening, the husband sees a person he later idetifies as Andrew fleeing the apartment. He then goes down and discovers the vitims. Doesn't look so good for Andrew.
Especially after the police find a spent 9mm shell in his car. Especially after he admits to throwing the gun he had been carrying around off the Golden Gate Bridge.
In fact, it looks so bad to Amy that she tries to get him to plead guilty to the offense as a juvenile. He will be in jail for only eight years under California law if convicted as a juvenile. She convinces the parents that this is the best way to go and she convinces herself. The one little detail that she fails to cover is convincing her client. Her next error is to tell the Assistant DA that he will plead before she has gotten that nailed down. It all becomes unraveled in juvenile court as the client maintains his innocense and Ms. Wu quickly finds herself in the cross hairs of an angry judge and a furious district attorney. The matter is quickly calendared for a hearing on whether he should be tried as a juvenile or an adult and the outcome looks forgone. Her client, instead of facing eight years will likely be facing life.
Meanwhile, Deputy Chief Glitsky is having his own problems with his new job and is embroiled with a high profile decision not to take a known murderer off a bus, but to wait until the passengers disembark and arrest him then. Quick and easy. Except the target smells the police and takes the passengers hostage, killing several before his demands for a helicopter and transportaion are met. He is killed by a sniper on the way to the copter, but the media is merciless in pursuing the matter.
As a part of his job, Glitsky becomes aware of a murder where a woman without an enemy in the world is gunned down as she answers her front door. The husband is the only possible suspect, but that is going nowhere. Glitsky decides to talk to him and is also convinced that the husband is innocent. The only thing out of the ordinary that the woman ever did in her life was be a part of a jury many years ago who had convicted a person for murder.
Shortly thereafter, the District Attorney is found murdered in the parking lot outside of his office.
Dismas Hardy feels that he is responsible for the mess that Amy Wu has created by failing to mentor her properly and decides to sit "second chair" in the deternmination hearing that has been ordered to go forward in five days.
To tell more about the story line would be to spoil the fun of reading a master story teller at the top of his game. Suffice it to say that the stories converge and the ending is all that a reader of this type of novel could ask for. I look forward to Lescroat's novels and if you have not discovered him yet, it is high time you did.
Read more
12 people found this helpful
Helpful
Report abuse
See all reviews

T.M.P.Clear
5.0 out of 5 stars Great author - great book
Reviewed in Spain on March 22, 2016
Verified Purchase
Yet another great book in the series from John Lescroart - it holds your attention from start to finish, as it twists and turns.
Read more
Report abuse

J. Page
5.0 out of 5 stars Never disappointed
Reviewed in the United Kingdom on August 18, 2009
Verified Purchase
I am never disappointed by any books from John T Lescroart. He develops characters and storylines like no other author I have read.
Read more
One person found this helpful
Report abuse
See all reviews
Back to top
Get to Know Us
Make Money with Us
Amazon Payment Products
Let Us Help You
EnglishChoose a language for shopping. United StatesChoose a country/region for shopping.
© 1996-2022, Amazon.com, Inc. or its affiliates