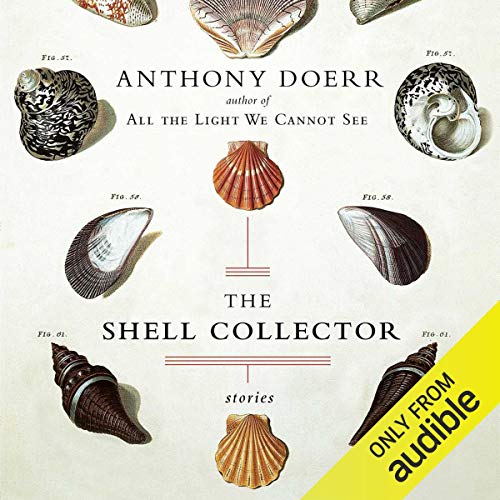 List Price: $17.96
You Save: $1.97 (11%)
By completing your purchase, you agree to Audible’s Conditions Of Use
Sold and delivered by Audible, an Amazon company
Share

4.4 out of 5 stars
4.4 out of 5
721 global ratings
How are ratings calculated?
To calculate the overall star rating and percentage breakdown by star, we don’t use a simple average. Instead, our system considers things like how recent a review is and if the reviewer bought the item on Amazon. It also analyzes reviews to verify trustworthiness.

stardancer
5.0 out of 5 stars ENCHANTING & MEMORABLE COLLECTION OF SHORT STORIES
Reviewed in the United States on June 21, 2017
Verified Purchase
Having read 'All the Light We Cannot See' and loved it, I had high expectations of this collection of short stories by the same author.
Anthony Doerr is a word magician. His prose is lyrical, his observation of Nature awe inspiring and his characters memorable. I was enchanted by each story in this book. It is by far the best collection of short stories I have ever read.
From the tropical heat of Africa in the first story, (from which the book title is taken,) to the frozen winters of Montana, the foggy coast of Maine or grim Lithuanian cities, the author transports you with consummate ease. His writing is so beautiful, I wanted to read and re-read many passages. I know I shall return to these stories again and again. The spirituality or magical realism of his work gives added depth to each beautifully crafted piece.
But he saves the best for last. 'Mkondo' is a masterpiece of short story writing. He captures the contrasts between the life of the wild Tanzanian girl and that of the American city man to perfection. To give more away would be to spoil a reader's anticipation.
Just purchase this collection. I promise you won't regret it!
Highly recommended.
Read more
24 people found this helpful
Helpful
Report abuse

Azurekingfisher
5.0 out of 5 stars Gobstoppingly brilliant writer
Reviewed in the United States on August 21, 2016
Verified Purchase
Doerr is a phenomenally talented writer: his prose delivers a wonderful tension between precision and lyricism. Doerr is uncanny in his ability
to create rich dimensional characters that live on in the reader long after the book has ended. Don't miss his novels or short works.
Read more
23 people found this helpful
Helpful
Report abuse

C. Chappell
4.0 out of 5 stars Disappointing
Reviewed in the United States on March 9, 2020
Verified Purchase
Anthony Doerr's book All the Light We Cannot See was brilliant and a wonderful story. Yes, there were tragic and sad events, but there was also hope. In this collection of stories, I found it to be mostly sad and without much hope. It did not meet my expectations after reading All the Light We Cannot See: however, the stories were well constructed and characters very well rounded.
Read more
4 people found this helpful
Helpful
Report abuse

Green Rose
4.0 out of 5 stars ENJOYABLE, SOMBER, BEAUTIFUL, yet a bit predictable
Reviewed in the United States on February 22, 2015
Verified Purchase
Basically I enjoyed the series of stories (8) and the writer's style. There is a lot of well described images of nature which I loved. I don't mind having some challenges when reading and the story, So Many Chances, was written with many of its sentences short, actually more like abrupt phrases. It created a feeling for me that I was experiencing language translated to English from Spanish. In translations, it seems as if some elements are missing making for a more halted effect. For example, page 76 of the paperback:
"Then she sees the fisherman. Just to her left. Wading. As if he came from nowhere. From nothing. From the sea itself."
The other challenge that I found interesting is that the author does not use quotation marks for dialog. A few times it tripped me up but its main effect is a slowing down of one's reading speed which I don't object to. I like to slow down at times to more fully enjoy a writer's style but it did take a little time to get used to.
The one issue I could bring up is that as I progressed through the stories, I felt I could predict the author.
As far as reviews that the stories had no endings (leaving the readers unsatisfied or confused), I totally disagree. An author does not have to wrap a story up into a neat and tidy box. The story, A Tangle by the Rapid River, has an ending that implies the main character's life is unraveling from an unexpected event earlier in the day. One can easily picture what he is facing ahead, quite symbolic of infidelity.
On the other hand, several stories do have endings that require just a tad bit of reading between the lines: The Shell Collector, For a Long Time This Was Griselda's Story, July Fourth, and The Caretaker. Nothing the matter with putting a book down and spending a moment reflecting and then going back and rereading the ending to gather up a few more clues to how the story wraps up.
Read more
13 people found this helpful
Helpful
Report abuse

C. E. Stevens
VINE VOICE
5.0 out of 5 stars Primal, fragile, beautiful
Reviewed in the United States on September 25, 2014
Verified Purchase
I read The Shell Collector after being mesmerized by All the Light We Cannot See. Whereas I would characterize All the Light as providing a probing and thought-provoking juxtaposition between the inherent fragility and frequent ugliness of human nature and civilization relative to the beauty of the natural world, many of the stories in The Shell Collector display nature in its rougher, almost primal state--especially the first few stories, such as The Hunter's Wife and the titular Shell Collector. However, as the collection moved on, I felt like the mood foreshadowed All the Light more, as the natural world became more welcoming and almost magical at times--exemplified best by the final story, Mkondo, I would say. Likewise, the relationship between Joseph Saleeby and Belle in The Caretaker reminded me in many ways of that between the central protagonists in All the Light--physically handicapped yet mentally strong girl coupled with male character who is physically able yet psychologically weary and scarred. I enjoyed all of the stories in this collection, but it is probably these two that I enjoyed the most--The Caretaker in particular was intense, poignant, and memorable.

In many cases, reading earlier works of an author who has produced later masterpieces can be a slight letdown, but for me that wasn't the case with The Shell Collector. Vivid, interesting, thought-provoking ... I'd recommend this collection whether this is your first exposure to Doerr, or whether you've read other works by him already.
Read more
33 people found this helpful
Helpful
Report abuse

Sewing Grandma
4.0 out of 5 stars Prepare to be Spellbound
Reviewed in the United States on December 15, 2016
Verified Purchase
I generally don't pick up a collection of short stories, but I so enjoyed Doerr's All The Light You Can Not See that I decided this would be a way to become more familiar with his work. Doerr is a master with words, particularly, evoking a sense of place. I find his creation of strong lead characters who are blind or deaf intriguing. Somehow, in lacking one sense, they become more sensitive in other ways. I also find his ability to combine his scientific knowledge, which appears to be vast, to story telling very compelling. My reason for giving the collection only four stars was that I felt, stories were "unfinished." They were so complex that I would like to see them turned into novels. This is a master craftsman and I look forward to reading more of his work.
Read more
7 people found this helpful
Helpful
Report abuse
See all reviews

Kindle Customer
4.0 out of 5 stars I need a relationship with the characters
Reviewed in the United Kingdom on December 4, 2015
Verified Purchase
I read this collection of short stories after becoming entirely immersed in All the Light we Cannot See and, although I recognise that you cannot become as involved with the characters in a short story, I was a little disappointed in the the characters in the short stories in The Shell Collector. I loved the plots and the ideas behind them, but I do like to have a relationship with characters. What I did love about these stories was the language and Doerr's power of descriptive detail. I found The Caretaker quite disturbing, while my favourite stories were The Hunter's Wife and Mkondo.
Read more
10 people found this helpful
Report abuse

Neal Garratt
5.0 out of 5 stars A delightful book.
Reviewed in the United Kingdom on November 7, 2018
Verified Purchase
What a delightful book- it’s so well written that in parts it’s like reading poetry- each story takes you into a different world and completely immerses you. I loved every page and didn’t want to finish each story. There is an art to writing a short story and this book paints each story beautifully. I can not recommend highly enough.
Read more
3 people found this helpful
Report abuse

Leitir
5.0 out of 5 stars Some great short stories in this collection
Reviewed in the United Kingdom on March 2, 2021
Verified Purchase
I read this as a recommendation from a book club that I’m in. One or two of the stories didn’t land with me at all. But overall the collection is very strong.
Read more
Report abuse

Amazonian
5.0 out of 5 stars A great storyteller
Reviewed in the United Kingdom on November 16, 2016
Verified Purchase
Beautiful book. I loved the style of the writing and atmosphere each story created
Read more
2 people found this helpful
Report abuse

Baf
5.0 out of 5 stars Brilliant
Reviewed in the United Kingdom on March 27, 2021
Verified Purchase
I came to this after reading 2 of this author's other books. This is his first book - short stories. I think it's brilliant! All the stories "spoke" to me, even those quite diverse. This author is someone who understands the human condition in some depth. I am now reading ALL of his books!
Read more
Report abuse
See all reviews
Back to top
Get to Know Us
Make Money with Us
Amazon Payment Products
Let Us Help You
EnglishChoose a language for shopping. United StatesChoose a country/region for shopping.
© 1996-2021, Amazon.com, Inc. or its affiliates