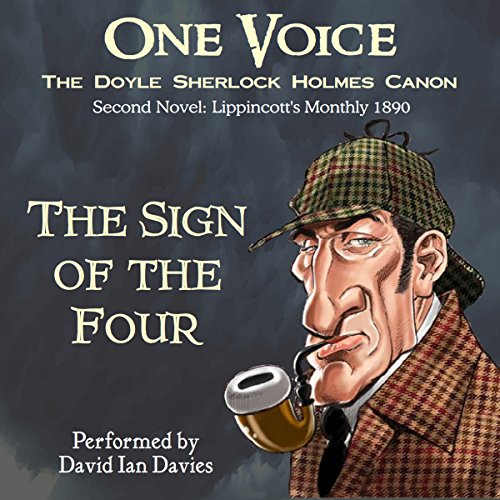 4.4 out of 5 stars
4.4 out of 5
1,926 global ratings
How are ratings calculated?
To calculate the overall star rating and percentage breakdown by star, we don’t use a simple average. Instead, our system considers things like how recent a review is and if the reviewer bought the item on Amazon. It also analyzes reviews to verify trustworthiness.
Top reviews

Frank DonnellyTop Contributor: Poetry Books
TOP 1000 REVIEWERVINE VOICE
4.0 out of 5 stars The Sign of the Four - A Very Good Example of Both Sherlock Holmes and Victorian Detective Fiction
Reviewed in the United States on July 10, 2019
Verified Purchase
This review is specifically for "The Sign of the Four". The reviews I am looking at appear to be of various products.

"The Sign of the Four" is the second "Sherlock Holmes" novel, the first being "A Study in Scarlet". This novel was published in 1890, during the Victorian Era. It is a good example of both of a Sherlock Holmes novel, and Victorian Literature. The novel is of medium length. Many Victorian novels are quite lengthy compared to many modern American popular novels. The language is somewhat formal and proper, especially when individuals such as Holmes and Watson are speaking. The is no vulgarity. The story was authored during the time of British Colonialism and some references may seem ethnically insensitive.

"The Sign of the Four" and "A Study in Scarlet" are both good novels and I liked both of them about the same. Both involve a back stories from other countries. The back story takes up a good bit of the time of both novels. It also makes both novels somewhat unlikely stories, but of course, this is fiction! At times both of these stories are somewhat convoluted. But in the end they are both fairly readable and comprehendable.

As a retired detective who enjoys Victorian Literature, Sherlock Holmes is certainly one of favorite fictional detectives.. I enjoy some of his leaps of logic, although for me many of them fall into the category of "possiblity" rather than "probability" as far as I am concerned. Of course Sherlock Holmes is almost always correct.

During my career, I had to rework numerous cases, "cold cases" and others that were generally screwed up messes. When I worked these cases, what I found was that often police officers would sometimes make such leaps of logic and then assume these leaps are correct. When cases go nowhere, as often as not I found it was because these leaps were incorrect.

In summary, I liked this novel very much. At times the story was somewhat convoluted but was still enjoyable. In the near future I intend to continue my study of Sherlock Holmes stories, the next being "A Scandal in Bohemia". Thank You...
Read more
5 people found this helpful
Helpful
Report abuse

Abbigail Holmes
5.0 out of 5 stars Hardcore Mystery
Reviewed in the United States on August 22, 2020
Verified Purchase
I'm a huge fan of Sherlock Holmes and when I read for the first time this book I wasn't very delighted. I was just a kid and it was too slow for me, I guess. No "real" action like in most of A.C. Doyle's stories about Sherlock.
But, when I grow up, I realize how brilliant this story is. It is not just a mystery novel, it is a family drama set in a dark period of British colonization of India and Doyle works through a few decades of history to make his point at the end of the novel.
As a kid, I couldn't comprehend it. As a grown-up, I couldn't but be amazed at how A.C. Doyle portrayed not only my favorite detective but one era of British history using all classes of British society and their secrets to show that.
Read more
2 people found this helpful
Helpful
Report abuse

THE SIGN OF THE FOUR has been one of my two favorite Sherlock Holmes books since I was a child. What red-blooded American boy or girl for that matter wouldn't like an adventure and mystery tale of stolen treasure; India during the mutiny; strange, exotic characters invading a stately home of England in search of the treasure stolen from the thieves by double dealing "gentlemen" ; murder and more. The only thing I didn't like was the ultimate fate of the treasure. As an adult, I understand that this enabled Dr. Watson to find an even greater treasure but....
Read more
3 people found this helpful
Helpful
Report abuse

Ivan's choice
5.0 out of 5 stars Wonderful novella by Doyle
Reviewed in the United States on November 12, 2019
Verified Purchase
I think my money is well spent on this Penquin edition. The sign of Four explains where DR Watson meets his future wife and here is the answer.
This young woman will become a very rich lady if her fortune is recovered. Then the new found riches certainly would have deterred Dr Watson from declaring his love. Then the key to the treasure box is lost and so by this mysterious incident and accident, Dr Watson gains a true love out of a mere trifle while Holmes has to bear with a boring life again.
Peter Ackroyd's introduction is very brief for a Penguin introduction but very concise. A good read!
Read more
2 people found this helpful
Helpful
Report abuse

Narrelle
4.0 out of 5 stars Still a great action mystery
Reviewed in the United States on July 9, 2015
Verified Purchase
Of the novels, The Hound of the Baskerville is the best, but this runs a close second. It contains many of the passages which gave us the clearest idea of Holmes - who finds emotion clouds the mind, and 'cannot congratulate' Watson on his marriage for that reason. There's a vehicle chase (the steamers on the Thames) and secret treasures and distinctive, often grotesque characters and Conan Doyle's evocative descriptions of London and landscapes. The scene with Toby the dog on the hunt for a diminutive murderer and how that ends up is still one of my favourite passages, ending as it does with laughter.

The years since it was first published haven't diminished the power of the mystery, the personalities of Holmes and Watson (or indeed of London) or Conan Doyle's lively writing style. It remains a great adventure, enormously fun (even with the more awkward passages that appear within the context of its 19th Century origins) and of course a wonderful example of the appeal of the Great Detective, Sherlock Holmes.
Read more
6 people found this helpful
Helpful
Report abuse

KW
1.0 out of 5 stars Extremely Cheap Printing
Reviewed in the United States on October 9, 2018
Verified Purchase
This ISBN (1523855789) is a very cheap quality print and is something I'm seeing more commonly now with stories in the public domain--particularly soft covers. The cover is a poor quality image and the printing is crooked. The quality of paper is ok, the text printing is ok, BUT the margins don't give enough room to read all words in each row. The last word is too close to--or inside--the binding, which is a terrible reading experience.
Read more
2 people found this helpful
Helpful
Report abuse
See all reviews

Kindle Customer
3.0 out of 5 stars Entertaining
Reviewed in the United Kingdom on August 10, 2018
Verified Purchase
Sherlock Holmes can be a tough nut to crack - you have to concentrate on the language, there are times where there are a lot of words for the sake of words, and the narrative doesn’t feel like it’s moving. But there are also times when you can build a head of momentum, and as you read, you get swept away with the rhythm of the writing.

This is my second Sherlock book now, and my current assessment would be that it can sometimes be hard to be motivated to read them, but once you get going, they are hard to put down.

A fun story, and will definitely continue with the Sherlock cannon!
Read more
6 people found this helpful
Report abuse

The story was actually shorter than I had expected but it allowed for the action to move swiftly, for Sherlock to display his detecting skills and show off a little, and let us get to know Watson and the beginning of his relationship with Mary Marsten.

For my first foray into Arthur Conan Doyle's writing, The Sign of Four was a great read. Full of mystery and intrigue, stolen gold and mysterious thieves who can vanish without a trace.

MsDocker
4.0 out of 5 stars Amusing
Reviewed in the United Kingdom on June 26, 2017
Verified Purchase
My first Sherlock Holmes story! This was on my list of required reading for university and found it to be a humorous, easy read. It was very amusing to discover the 'real' Sherlock Holmes is coke addict! This short read definitely left me wanting to read more of the stories.
Read more
8 people found this helpful
Report abuse

Carolyn Devine
1.0 out of 5 stars Who wrote this?
Reviewed in the United Kingdom on January 10, 2020
Verified Purchase
This edition reads as if it has been translated from a foreign n language by somebody with poor English. Americanised words like 'hassle', ,'buddy', 'guy' abound and it frequently makes no sense. A pity I can't complain to the publisher because it is unreadable and was a waste of money! I was quite amazed to read the other reviews as this Kindle edition makes very little sense!
Read more
One person found this helpful
Report abuse

Officer Dibble
3.0 out of 5 stars Drugs and alcohol
Reviewed in the United Kingdom on March 15, 2018
Verified Purchase
Holmes is an extraordinary character even for 21st Century readers, quite what the Victorians made of him would be worthy of considerable study. Watson is more a chap of the first water and narrator of this gallop through foggy streets, pools of lamplight and 'bediamonded women'.

The real star is Toby the Hound sniffing his way across the entire Greater London area. Enjoyable read let down by the final, lugubrious, exposition chapter.
Read more
Report abuse
See all reviews
Back to top
Get to Know Us
Make Money with Us
Amazon Payment Products
Let Us Help You
EnglishChoose a language for shopping. United StatesChoose a country/region for shopping.
© 1996-2021, Amazon.com, Inc. or its affiliates