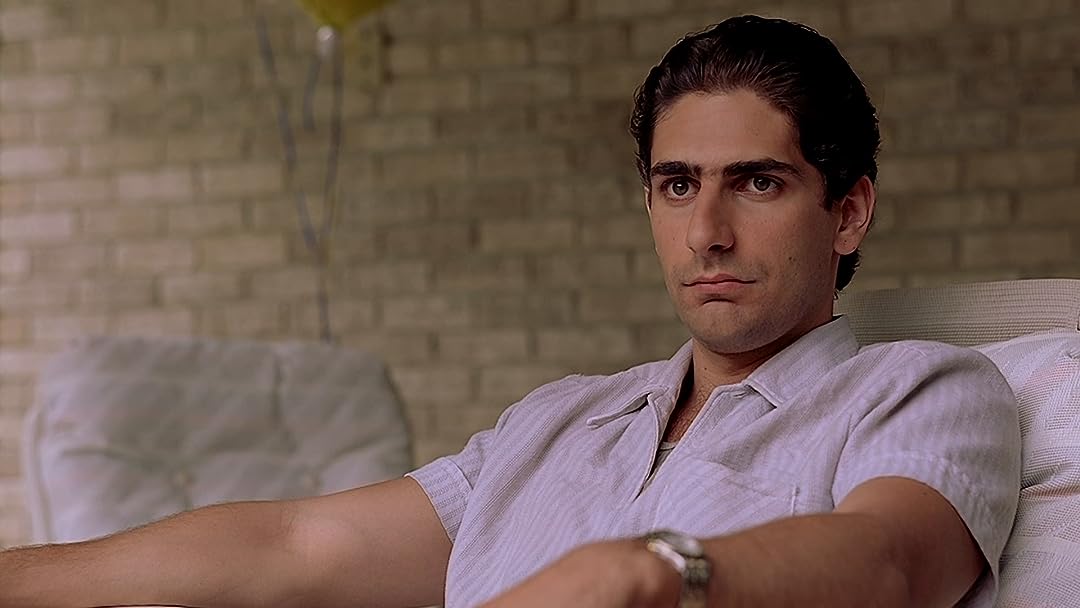 C. Joseph StuessyReviewed in the United States on January 26, 2017
5.0 out of 5 stars
Nice surprise!
Verified purchase
We are the last people in civilization to actually see "The Sopranos." But we were getting desperate for something to watch, and so we put it on our Amazon Prime watchlist. Really enjoyed season 1, episode 1. Also watched episode #2. Far better than we had imagined. Although it is an interesting story about family and the mob, we really appreciate the well-written script and the humor (which often is quite subtle).

Now we understand why everyone else liked this series!

Rainbow GirlReviewed in the United States on January 16, 2017
5.0 out of 5 stars
A must watch if you haven't seen this series!
Verified purchase
Oh my word! Now I see why this series was so wildly popular back when it came out. I was recently given a box of DVDs, three items of which were boxed and unopened sets of The Sopranos seasons 2 - 3 - 4. I tried to get the first season from our library so I could see if this was even something I'm remotely interested in. In the meantime, a friend informed me that the whole series is available on Amazon Prime! Well, two days ago I jumped in with all four feet and cannot stop watching. Made it to season 2 the second night. I'm hooked and love love love this!
Sadly, I did not know until yesterday that James Gandalfini had died in 2013. NO! What a great actor!
I highly recommend this to all who have not taken a step with the Sopranos! Back to watching! :)

Kieran MReviewed in the United States on May 1, 2018
5.0 out of 5 stars
The greatest show ever made
Verified purchase
The greatest tv show ever made. Starring an Italian-American cast with some cast and crew members actually having a history of being "connected" providing a story that follows the Soprano crime family as well as the Soprano home family. The dvds came reasonably quick and we have had no issues with playing them so far. The case that it came in was well wrapped and is in mint condition. Already owned the full series but they are the wrong region to use in America so I have to get the full set again. Have watched the entire season 17 times and am on the 18th now.
10 people found this helpful

BuyerInParadiseReviewed in the United States on September 2, 2015
5.0 out of 5 stars
True crime Metro NY style - lots of character and all you want in entertainment drama.
Verified purchase
The characters have a depth and complexity that becomes more apparent with every episode. The shock scenes, like Tony running down a "no pay" borrower, combined with lowbrow lifestyle while attempting to appear as a conventional family, make for dark humor as well as drama. We all know those folks who see themselves entirely different from what everyone else sees and The Sopranos take that to the highest level utilizing sex, drama, crime, hypocracy and dark humor. It's an adult series that would be innapropriate - and lost on anyone younger than 21. The fact that these are supposed to be Italian- American criminals is irrelevent to the series as you could substitute any other culture into this series if you could get actors of the same ethnicity which is why Sopranos works so well. This could be about a Chinese-American organized crime family or a Hungarian American crime family; it doesn't matter, it's the true dimension of the characters that makes this series one of the few that I can watch over and over and find something new each time. This is definitely worth purchasing because you'll watch much more than twice. There are many episodes in many seasons, so by the time you get through all of them, you'll have your favorite scenes but will forget most others. If you're concerned about the "glorification of crime and lawlessness", don't let that stop you from buying this collection, because I'm sure you won't be after watching a season or two.
18 people found this helpful

Tony NYCReviewed in the United States on November 18, 2021
1.0 out of 5 stars
EDITED
Verified purchase
If you're a REAL Sopranos fan like I am, you will be annoyed that they edited out bits here and there. I first watched The Sopranos when it first came out on HBO and videotaped them every week. Over the last twenty years, I've watched them over and over and then bought the Complete DVD set and watched those constantly. Yes, I'm a huge Sopranos fan.
NOW, too lazy to keep changing DVD's (I know, I'm lazy) I decided to PURCHASE the Sopranos, season by season here on Amazon. I know the Sopranos by heart. I noticed that little bits and pieces of each episode are edited out. ARE YOU KIDDING ME???????????. Only a few words here and there, BUT STILL. I DID NOT EXPECT AN EDITED VERSION OF THE SOPRANOS.

HankReviewed in the United States on October 23, 2015
5.0 out of 5 stars
Great show
Verified purchase
*** there could be some spoilers but I tried not to include any details for those who have not watched the series yet.***
Great show but I never got to watch it when it first run on HBO. Now I'm enjoying the entire series on Prime.
This isn't just a mob story. It's almost like a reality show in the lives of those members of this organized crime family and their associates.
What really goes on inside the mind of the would be boss is pretty interesting and the fact that they also have a normal lives and normal issues like everyone else such as children's school, family and parents.
The main character Tony Soprano starts as a cool guy in the family and as you progress into the series you see him getting more corrupt and forgets his priorities.
He deals with depression and infidelity and the latter seems to be a cure for the former. He likes the attention from women and does not realize how that affects his married life.
Tony, in a sense, is a good guy who could have been a legitimate business man but he had no chance of that life due to his upbringing.
We see the same outcome with the children of all these mobster characters portrayed in the series, they hardly had a chance in a leading a normal life.
I still got one last season to watch so I don't know the fate of any of these characters but I really enjoyed the series.
8 people found this helpful

MattRReviewed in the United States on March 1, 2015
5.0 out of 5 stars
The Sopranos: Not just another show about mobsters
Verified purchase
Aside from the excellent writing and acting, what I really love about this show is that it addressed all the moral issues that viewers might have about a life of knee-busting crime. For years I boycotted anything, including "The Sopranos" that I thought glorified the mob. Watching it now, years later, I realize I was wrong. This show asks all the questions I would have ever wanted to ask any crook: "Do you have reservations about how you actually make a living?" Tony is asked by his shrink. "Yes," he says. That kind of says it all.
This first season shows us how Tony is driven to the brink, not just by the stress of his dangerous occupation, but by the demands of the women in his life, none of whom are intimidated by him (with the exception of his psychiatrist) the way his associates are. He has the skills for dealing with his work "family" but not so much with his family at home: a crazy, hateful mother, a sharp-eyed wife, a spoiled daughter and a flaky sister. Poor Tony. He's likable enough, if you're on his good side, yet we watch him kill a man right in front of the camera, with his bare hands. Tony's magnetism, which really carries the show, is testimony to great acting, great writing and great production. I can't wait to watch the rest.
10 people found this helpful

Joanne E. TheodorouReviewed in the United States on February 16, 2019
5.0 out of 5 stars
Not for the kiddies!
Verified purchase
This show is terrific - the Granddaddy of all mini series to follow. Epic. You are hooked by the Soprano family (define "Family?") immediately. Blatant and bold as it is, it is the subtleties, the great attention to tiny details that defines this series. Every piece of dialogue is important and advances the story.
I do caution that this is NOT for kids. Then language, the sex - important to the story's realism, but not for kids.
Great storytelling.
5 people found this helpful
See all reviews
Back to top
Get to Know Us
Make Money with Us
Amazon Payment Products
Let Us Help You
EnglishChoose a language for shopping. United StatesChoose a country/region for shopping.
© 1996-2022, Amazon.com, Inc. or its affiliates