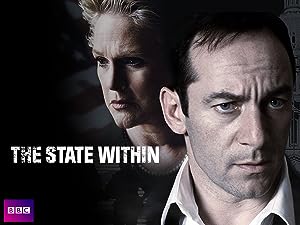 Season 1
(724)
7.82006TV-14
A flight explodes in mid-air during take-off near Washington DC. Later that day a diplomatic catastrophe envelops the British Embassy. A cat's cradle of tangled affinities and conflicting interests unfolds, told through interlinking stories, as British Ambassador Mark Brydon slowly realizes that he is being played by an invisible puppeteer of great power.

The ParatrooperReviewed in the United States on January 17, 2018
5.0 out of 5 stars
BBC Delivers 5 Stars
Verified purchase
BBC Delivers on every level. This far above anything American TV can produce. It is as timely now as it was when it came out...maybe even more so. It is one of the finest political dramas I have ever seen. The acting is top rate. Jason Isaacs as Sir Mark Brydon,Ben Daniels as Nicholas Brocklehurst and Sharon Gless as Lynne Warner - U.S. Secretary of Defense all give outstanding performances and the plot holds on to you as it builds. Everything seems gray from the start, no good vs evil...the lines are blurred and you're never sure who is on what side. Well done and well worth the watch/
7 people found this helpful

MarjamReviewed in the United States on September 30, 2018
5.0 out of 5 stars
Good Acting, Complex Story, some misses
Verified purchase
Jason Isaacs, Ben Daniels, Sharon Gless
Very good series with high-stakes diplomatic relationships at stake; a mystery involving a former British military man on death row in the US, a Secretary of Defense who has an axe to grind; a former British diplomat with a self-inflicted stain on his name; a child of two worlds; MI-5, or is it MI-6, a British Ambassador to the US who has to navigate these dangerous waters and keep a crisis from exploding into conflict.

The various relationships are depicted well; the actors are all marvelous, especially Jason Isaacs [Ambassador Sir Mark Brydon] and Ben Daniels [the high-level spy at the Embassy, and you never quite know just what he's up to].

The only bad role, really, is the Secretary of Defense, who is written as a strutting caricature of a "woman in a man's job." Sharon Gless does a good job with what she's given, but not only is this character unsympathetic, she is so badly written you wonder how such a person would get a high level job. Then again, if she was appointed right now ....

MossmanReviewed in the United States on November 29, 2020
5.0 out of 5 stars
Actually a review on the seller
Verified purchase
This DVD, purchased from Decluttr Store, was used. I was not able to watch it until well after the return date had expired. When I did try to watch it, the 2nd and 3rd episodes (Disc 1), had problems that froze or was largely unwatchable, and Disc 2 would not play at all. Frustrated, I wrote the seller even after close to 3 months to let them know, to their credit, they refunded the entire price of the defective CD. Not many merchants would do that, so they have my total respect and I would not hesitate to buy from Decluttr Store again. I did really like what I was able to watch and finally had to purchase another copy elsewhere to try and finish it. Alas, that DVD also had issues.
One person found this helpful

Kerry WaltersReviewed in the United States on December 31, 2008
4.0 out of 5 stars
Political-industrial complexities
Verified purchase
"The State Within" is a pleasing thriller on just about every count. The acting is good (especially Jason Isaacs as Sir Mark Brydon, British ambassador to the U.S.; Ben Daniels as Nicholas Brocklehurst, British spyguy; Eva Birthistle as Jane Lavery, civil rights attache at the British embassy; and Marnie McPhail as FBI agent George Blake--she's particularly impressive). The script and plot are good: intricate, brainy, but not impossibly so. The cinematography is good. And the basic premise of the show--that it's frequently in corporate and political interests to start wars--is all too true, as recent events have sadly shown.

In addition to all this, it can hardly be denied that the BBC is taking a poke at the Bush administration in "The State Within." Instead of a vice president pulling strings and manipulating world events behind the scenes, the film makes the Secretary of Defense, hard as nails Lynn Warner (ably played by Sharon Gless), the eminence grise. But as the story unfolds, viewers discover that there are powers manipulating her as well, putting a new and frightening spin on Eisenhower's valedictory warning against the military industrial complex.

A few earlier reviewers dismissed "The State Within" as a bit of U.S. baiting. But, notwithstanding the thinly veiled allusions to Vice Presdient Cheney, this strikes me as a rather unreflective analysis. As a major world power, the U.S. certainly takes a centerstage position in the film. But the theme is more about the abuse of power by international financial corporate interests than about nationalist imperialism. In a day and age when such interests are at least as powerful as state governments, the message of "The State Within" is timely.
9 people found this helpful

HistoryBuff22Reviewed in the United States on November 19, 2013
5.0 out of 5 stars
Excellent thriller is very satisfying
Verified purchase
This thriller really delivers -- complex, layered story-line, well-developed characters well played by an outstanding cast, ties to contemporary politics and the background themes of East-West conflicts. The story develops carefully in the beginning. I felt compelled to watch the first 3 episodes just to get a gist of how the characters meshed and how these diverse sub-plots would converge. The good guys and the bad guys are not clearly defined in the beginning (other than the British ambassador, clearly our tragic hero). Plot twists and great cinematography are very satisfying. Excellent entertainment overall.
One person found this helpful

TravellerReviewed in the United States on March 10, 2014
5.0 out of 5 stars
Intelligent television
Verified purchase
An oxymoron? Not so much - this is hands down the first series I've seen that didn't have moments requiring quite a bit of suspension of disbelief or turned to be outright insulting in it's assumptions regarding the lack of intelligence of the audience. Tightly packed with a complex web of intrigue, real character actors (no us of arbitrary shouting, more subtle and nuanced interaction), great photography and score. My one complaint is that there isn't much, much more. I wish I had 10 seasons of this to watch. As is, the story arc plays out perfectly, and I will admit that there's no improving on perfection. I am thankful to have found this in Amazon's Prime store, a real treat.
One person found this helpful

Grady HarpReviewed in the United States on October 11, 2010
5.0 out of 5 stars
Quality Suspense: Terrorism from Within
Verified purchase
THE STATE WITHIN is a six episode series from BBC that has class, excellent writing, top notch acting and enough twists and turns of story line to keep the viewer on the edge of the seat for the six hours it plays. Written by Michael Offer and Daniel Perceval (who also directs 3 of the episodes while Lizzie Mickery directs 3 others) the script is tight, the pacing deliberately fast, and the insertion of new characters into almost every episode serves not as distracting but as additive suspense.

Mark Brydon (Jason Isaacs in one of his finest roles) is the British Ambassador to the United States. The series opens with the explosion of an airplane over Dulles International Airport in Washington DC and Brydon must respond to what appears to be a terrorist plot. But who is the terrorist and who is the country behind the plot? Brydon is supported by his undersecretary Nicholas Brocklehurst (Ben Daniels, also wholly convincing in a tough role) and they must face the US government in the person of Secretary of Defense Lynne Warner (Sharon Gless, proving that she is a fine dramatic actress) and her undersecretary Christopher Styles (the always superb Noam Jenkins). There are clues that unravel slowly, fingers that point to a small Middle Eastern country, currently beset by political problems, not the least of which involve American corporate gains. Informers and witness are knocked off right and left and there are intelligence issues in both the British and the US camps that play on the concepts that Warner is financially involved in the plot and Brydon is compromised by a relationship that is related to the little country's dilemma. It is a rush to the finish to resolve all the subterfuge and it is played out very well by a large cast of excellent actors. One comment should be made about this BBC production: as opposed to films made in this country: there is a frank and well acted same sex encounter between Brocklehurst and Styles in the first episode that sets the pace for the tenor of the story. No items of personal business are left unnoticed in this manipulation of information and the extremes that can be taken. While it is a suspense thriller, there is a lot of space for very real interpersonal relationships to unfold. Highly recommended entertainment, with special kudos to BBC for having the courage to explore topics so stringently avoided by American films. Grady Harp, October 10
2 people found this helpful

Louis HemmiReviewed in the United States on September 15, 2018
5.0 out of 5 stars
An instant favorite
Verified purchase
If you like this genre (action/adventure/espionage/conspiracy theory) you will love this. Sharon Gless and Jason Isaacs are two of my favorite actors, and they are at their best in this!
See all reviews
Back to top
Get to Know Us
Make Money with Us
Amazon Payment Products
Let Us Help You
EnglishChoose a language for shopping. United StatesChoose a country/region for shopping.
© 1996-2021, Amazon.com, Inc. or its affiliates