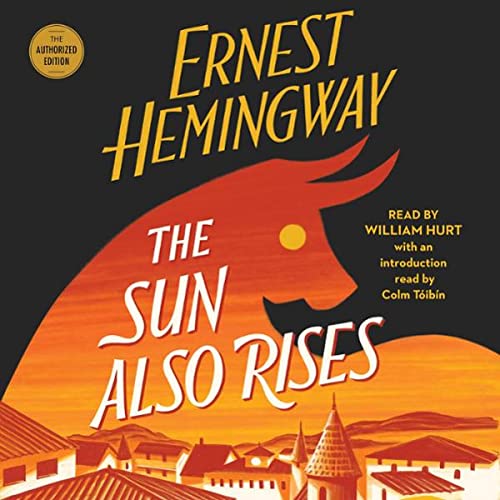 Ernest Hemingway (Author), William Hurt (Narrator), Colm Toibin (Author), Simon & Schuster Audio (Publisher) & 1 more
4.3 out of 5 stars 5,223 ratings
See all formats and editions
Sorry, there was a problem loading this page. Try again.
The Sun Also Rises is one of Ernest Hemingway's masterpieces and a classic example of his spare but powerful style. A poignant look at the disillusionment and angst of the post-World War I generation, the story introduces two of Hemingway's most unforgettable characters: Jake Barnes and Lady Brett Ashley.

Follow the flamboyant Brett and the hapless Jake as they journey from the wild nightlife of 1920s Paris to the brutal bullfighting rings of Spain with a motley group of expatriates. It is an age of moral bankruptcy, spiritual dissolution, unrealized love, and vanishing illusions. First published in 1926, The Sun Also Rises helped to establish Hemingway as one of the greatest writers of the 20th century.

Special invitation from Audible!
Learn more about Membership
List Price: $26.60
You Save: $5.61 (21%)
By completing your purchase, you agree to Audible’s Conditions Of Use
Sold and delivered by Audible, an Amazon company
Share

4.3 out of 5 stars
4.3 out of 5
5,223 global ratings
How are ratings calculated?
To calculate the overall star rating and percentage breakdown by star, we don’t use a simple average. Instead, our system considers things like how recent a review is and if the reviewer bought the item on Amazon. It also analyzes reviews to verify trustworthiness.

James R. Gilligan
VINE VOICE
3.0 out of 5 stars Canonical work of American literature (for some reason)
Reviewed in the United States on December 7, 2019
Verified Purchase
Jake Barnes was injured in WWI. His injury might have rendered him impotent. This could be the reason why he drinks so much. Jake drinks a lot of alcohol. So does his companion Lady Brett Ashley. She and Jake seem to love each other, but some obstacles are in their way. Alcohol. Money. His lack of confidence. Her fickleness. Lady Brett Ashley is in the process of getting a divorce so she can marry a bankrupt Scottish guy named Mike. Mike also enjoys drinking a lot of alcohol. Alcohol helps him suppress his jealousy when Brett has dalliances with Robert Cohn, a Jewish writer and a Princeton graduate who is a trained boxer, and a young Spanish toreador named Romero. Jake’s friend Bill also hangs around.

They travel from Paris to Spain and back again. They mainly drink and eat a lot. They also mock each other frequently and overuse words like “daunting” and “ironical” in their conversations. They enjoy the fiesta in Pamplona. During the fiesta, they watch the running of the bulls and a few bullfights. During the bullfights, Lady Brett Ashley becomes smitten with the bullfighter Romero. They run off together, but it doesn’t last. This story is pretty much a soap opera set against the backdrop of post-WWI Europe.

Because of its setting and its focus on what Gertrude Stein described as the “lost generation” of American expatriates living hedonistically in Europe after the Great War, this novel—Hemingway’s first—has been called one of the greatest works of American literature ever written. I do not necessarily agree, perhaps because of Hemingway’s trademark stark writing style and simple sentence structure, which I have attempted to reproduce in this review. It can get annoying, can’t it?
Read more
95 people found this helpful
Helpful
Report abuse

Lady Ashley is my favorite female character in all of literature. She is real, uncompromising, and yet a mystery to the very end. She is a siren with a heart or maybe without a heart?

Hemingway, unlike such great authors as Lawrence, Proust, Dickens, Tolstoy and Fitzgerald, could describe a scene, a setting, using half the words that these wonderful writers would use and yet be as poignant and vivid as any writer I have ever read. His descriptions of the bull fights at Pamplona and the fiesta are chilling and as splendid as anything I have had the pleasure to read.

Tomorrow, July 2, marks the day Hemingway died. He once said, "The only thing a person takes with him when he dies, is what he left behind" and in his case he left behind brilliant novels and masterful short stories that never fail to amaze and astonish me.
Read more
64 people found this helpful
Helpful
Report abuse

Diana S. Long
4.0 out of 5 stars It also sets
Reviewed in the United States on February 1, 2020
Verified Purchase
. Written in the 1920's, the author and his friends would be termed the “lost generation” and it does suit them. Personally, at least for me I find Hemingway and his writing style, frankly over rated. The discourses between the characters are minimal and it's not so much what they are saying but what they aren't saying. They meet up, they drink to excess, they insult each other and have a row or two, they separate and travel back and forth from France to Spain. The author gives us peaceful moments when his narrator Jake Barnes goes on a fishing trip or swims in the ocean to the excitement of bull fighting and a fiesta. They dance, they party and tell themselves what a swell time it's been but was it? Was it ever enough for anyone in this group? When I finish the book, I'm left with the feeling, What the hell was that all about? I thought the characters were superficial, the never ending cycle of day after day, night after night of trying to satisfy that lust for life which is a delusion at best. Perhaps one day, I will acquire a taste for Hemingway but today is not that day. I will however give it a high score because I realize what bothers me about this novel is what will make me think often of it.
Read more
31 people found this helpful
Helpful
Report abuse

Michael Ryland
2.0 out of 5 stars Didn't buy this for a college course, so....
Reviewed in the United States on August 11, 2018
Verified Purchase
If one were taking a course on "The American Novel in the 20th Century", I'm sure Hemingway would be featured prominently. However, for pure reading enjoyment, "The Sun Also Rises" falls flat. We meet a cast of characters that are tedious, scheming and wholly unlikable. We are then presented with a story that is little more than the characters doing a few things in between extended bouts of drinking. This is simply another Hemingway exercise in "manly men", chasing "confused women" during the years between wars. I've never been particularly taken by his celebrated style of sparse writing. For depth of character, give me Steinbeck. For richness of story, Faulkner. And for artful concision, I'll take Vonnegut. Hemingway has, and should have, lost his place among relative American writers of the 20th century.
Read more
41 people found this helpful
Helpful
Report abuse
See all reviews

Kindleworm Dot Com
2.0 out of 5 stars Alcoholic's Twaddle
Reviewed in the United Kingdom on January 11, 2021
Verified Purchase
My first taste of Hemingway and, honestly, i really have no idea what all the hype is about.

The Sun Also Rises is nothing but rich-alcoholics-get-bored-with-Paris-so-go-off-to-a-fiesta-in-Spain-for-a-week-to-get-drunk-there-instead. They mostly do nothing but drink alcohol of various types and expenses of which Hemingway will inform you like any decent, decadent, wealthy alcoholic would. They eat when they get hungry, sleep when they feel they need to and watch a few bull fights; about which, Hemingway is rather keen to portray to the world that the local Spanish know him to be an “officianado”, and that everyone must accept that it’s the height of art and wonder to brutalise animals for the entertainment of drunks.

Oh, and there’s lots of pathetic drunken arguments with pathetic drunken people arguing about other drunken people, or about people who won’t get drunk with them — with a good dose of antisemitism thrown in, which was only necessary if Hemingway was eager to portray his antisemitic credentials to the world as it bought absolutely nothing whatsoever to the actual story.

…mostly, it’s all just typical drunken alcoholic boring twaddle written down through the haze of a hangover the next morning.

And now i can’t be bothered to write another word about Hemingway ever again, and i certainly won’t be reading any of his other books. I gave him a chance and he failed miserably — but failing miserably is what alcoholics do best.
Read more
10 people found this helpful
Report abuse

Kid Ferrous
2.0 out of 5 stars I suppose ol’ Ernie got better after this…
Reviewed in the United Kingdom on May 24, 2021
Verified Purchase
This is my first ever Ernest Hemingway novel, and if it’s indicative of the rest of his work then it’ll be the last. I know Hemingway is (apparently) one of the “greatest writers evah” but I don’t care about that when reading the work of authors described as such.
I read it all, but it was a struggle. Unpleasant, shallow, entitled people drink too much and complain a lot in Paris. Then they go to Spain- rinse and repeat. Nothing else happens.
This is not a good book - it is boring and uneventful with unlikeable characters.
Read more
6 people found this helpful
Report abuse

Officer Dibble
3.0 out of 5 stars Moonshine
Reviewed in the United Kingdom on October 22, 2018
Verified Purchase
An oddly naive and adolescent style; "and then we went", "and it was nice", "I liked him, he was pleasant". Prudishness over Jake's shortcomings and Ashley's appetites. Casual anti-Semitism and racism. Lots of big boy's toys: drinking, hikng, fishing, bull-running, fist-fights, more drinking. Anthem for a lost generation or a group of over-privileged wasters on a bender?

One of the most important pieces of Twentieth Century literature? No. The basis of Hemingway's stellar reputation? No. Is he better than his peer F. Scott Fitzgerald? No.
Read more
14 people found this helpful
Report abuse

Dr. R. Brandon
5.0 out of 5 stars An Old Classic That Stands the Test of Time
Reviewed in the United Kingdom on July 7, 2021
Verified Purchase
It is a very long time since I last read any Hemingway, however, I was prompted to take him up again after references to him in a biography of Ezra Pound.
I found the writing style of Hemingway better than I had remembered. The short staccato sentences with lots of fast dialogue interspersed with rather good short descriptive passages is very engaging and makes for good pace. Hemingway is very clever at constructing dialogue between drunken friends and capturing the increasing malice as they slowly drift out of control. The writing was certainly a revolution in style and subject matter in its day and does clearly mark the beginning of the modern novel. It does not matter that the story of ‘The Sun Also Rises’ is almost completed reportage of one of many trips Hemingway made to Pamplona, this time in 1925 with a group of friends who became easily identifiable characters in his book. The Biblical title refers to the fact that the world ‘keeps on turning’ as events come and go. This is a good read and stands the test of time.
Copies of this novel are quite difficult to obtain and although this Penguin imprint (Arrow Books) is adequate it is rather cheap and cheerful and small in size.
Read more
3 people found this helpful
Report abuse
See all reviews
Back to top
Get to Know Us
Make Money with Us
Amazon Payment Products
Let Us Help You
EnglishChoose a language for shopping. United StatesChoose a country/region for shopping.
© 1996-2022, Amazon.com, Inc. or its affiliates