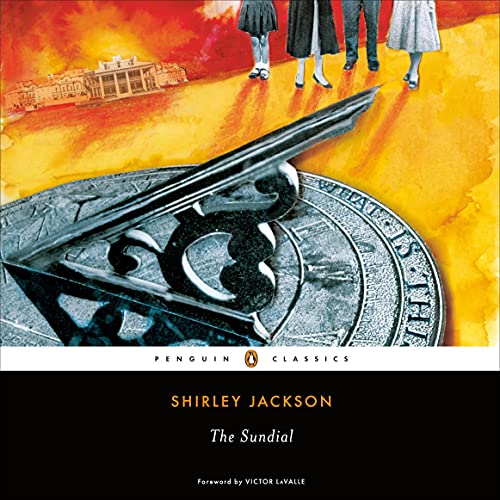 List Price: $24.50
You Save: $3.06 (12%)
By completing your purchase, you agree to Audible’s Conditions Of Use
Sold and delivered by Audible, an Amazon company
Share

4.6 out of 5 stars
4.6 out of 5
130 global ratings
How are ratings calculated?
To calculate the overall star rating and percentage breakdown by star, we don’t use a simple average. Instead, our system considers things like how recent a review is and if the reviewer bought the item on Amazon. It also analyzes reviews to verify trustworthiness.
Top reviews

Gary F. Taylor
HALL OF FAMEVINE VOICE
4.0 out of 5 stars "What Is Life?"
Reviewed in the United States on May 21, 2017
Verified Purchase
Shirley Jackson (1916-1965) is perhaps best known today as the author of “The Lottery,” a 1948 work regarded as among American Literature’s finest short stories. Written in 1958, THE SUNDIAL is essentially the story of a group of people living in a house that gradually cuts them off from the larger world—a general theme Jackson continues to develop in her later masterpieces THE HAUNTING OF HILL HOUSE (1959) and WE HAVE ALWAYS LIVED IN THE CASTLE (1962.) This particular group of people is the Halloran family, and the house in which they live is Halloran House, an oppressively elaborate estate on the outskirts of a drab village. The novel begins after the suspicious death of Lionel Halloran, when his mother Orianna takes control of the property. Orianna immediately decides that most of the family living in the house will be expelled—but not long after, elderly Aunt Fanny has a vision of her dead father, who constructed the house. He tells her that the world will shortly come to an end, and only those actually living in Halloran House will be spared.

Although the family has a mixed reaction to Fanny’s vision, Orianna rescinds her eviction notices, and as the novel progresses she brings in four more women and another man to round out the survival party. The final group consists of nine women and three men, one man an invalid, the other two distinctly virile. Aunt Fanny’s visions of her late father continue, and through sessions of mirror-gazing the group becomes convinced that the end of the world is indeed at hand. As the date approaches, Orianna tightens her authority, making it clear that she, and only she, will rule over the survivors.

Jackson always has a wicked sense of humor, and this novel presents it in a particularly extreme way: the way the characters interact and speak to each other is often jaw-dropping, and laughter is the only possible response. Jackson was also famous for creating tensions and then refusing to resolve them—readers are usually much more disturbed by what she implies than anything she actively describes—and THE SUNDIAL is no exception, a work that begins and ends with suspicious deaths that are never fully explained and which concludes in a very open-ended way. But in this instance, Jackson’s refusal to explain will exceed the tolerance of most readers. I think THE SUNDIAL is so open-ended that it will leave most readers with a sense of annoyance, with the feeling that Jackson has taken you upstairs and then suddenly left you there to find your way out on your own. If you’ve never read her works, begin with THE HAUNTING OF HILL HOUSE and WE HAVE ALWAYS LIVED AT THE CASTLE, and then, you are interested in their antecedents, back up to read THE SUNDIAL. But don’t begin with it.

John Carter
5.0 out of 5 stars Like many wait and refuse to face this world
Reviewed in the United States on October 21, 2016
Verified Purchase
The broad theme in Shirley Jackson's work is this: Do we hide/run from the world, in seeming (but false) safety or do we face it and live in it. And she usually portrays the world as a scary, lonely place. In this book, those turning away from the world are members of this family/cult who believe that only they will be spared from the upcoming end-of-the world. She takes a harsh look at religion. The religious themes are hard to miss as is her criticism IMO (murder of the son, the golden crown, the manipulation and bribery, control -- because she gives these a human form they take on the light of horror, but these are all religious themes, Christian themes). Am I the only one who sees this as a 'farce about'/'indictment of' religion? So few here comment on this theme though it is so very obvious. The True Believers are another competing wacky cult and, of course, each cult thinks the other is nuts. Also religion wants nothing so much as annihilation. End times, death are glorified in most religions as a gateway to paradise for the faithful. Thus the characters in this book are waiting rather than living.... Because it is too scary to face the world or because their best days are gone and they look forward to this glorious eternity. They seek the protection of their "Father" -- and waste this life and wait for heaven/ the end. Even the blackmail and manipulation to stay in the fold and to "believe" is part of mainstream religious belief. One of their party decides to leave but faces some nastiness in the world (arranged by the Cult Leader) that brings her back. Another is coerced to stay. Either way, God is the ultimate Mafia Boss bribing us with eternity to love him even if it means giving up on the only world we really know exists. Fancy, the small child says it when she tells Gloria that we already have a beautiful world. Why do we want this one to end to go to one that won't be better. Fancy also points out that people want a new world so they can be different but she does not think it works that way (this I think harkens to the idea that we will be magically perfected in heaven). The book is also prophetic for our times when religious zealotry is harming us more than it has in recent history, at least recent Western history. Religion is insane and Jackson makes it clear here that it is-- or at least she suggests that it is and we are lead to our own conclusions. And yet most of us are so steeped in the craziness that it sees that we cannot even see her critique of belief in this wickedly funny little book. In the end, Fancy (whim/chance) rules not religion, not planning, not trying to stay safe. WHEN SHALL WE LIVE IF NOT NOW. Beautifully written, of course.
Read more
12 people found this helpful
Helpful
Report abuse

Erzsebet Carmean
4.0 out of 5 stars Strange, Surprisingly Funny Story of the End of the World
Reviewed in the United States on October 11, 2014
Verified Purchase
A wealthy spinster is bequeathed a warning of the impending apocalypse. Her gold-digging sister-in-law takes the opportunity to plot her way to be Queen of the new world. An enormously obnoxious money-grubber arrives, bringing along her two "gels," the most obnoxious word to ever enter the great literary conversation that means "daughters" or "girls." A man they insist calling "the Captain," despite the fact he is not a Captain, is brought to the great house of the women to act as stud. This is at least partly necessitated by a need for genetic variation, but also because the patriarch is senile, wheelchair-bound and utterly usurped by his wife who would be Queen. A studious sycophant rounds out the primary cast, and takes devilish delight in making up scandalous tales about the women at their fin du monde party. The events unfold in a house so large there is an entire section that everyone except the spinster has forgotten; there she has recreated the apartment of her deceased parents, and play acts the role of her own doomed mother. Visitations and visions abound, and are sometimes full of strange humor - including a revelation of the sycophant hunting in the new world in his birthday suit. The dialog is crisp, barbed and often hilarious. The scenes of isolation, stranger danger, and drunkenness are drawn with such perfect verisimilitude you would at once know, even without being told, that this is a work by Shirley Jackson. THE SUNDIAL doesn't have the polish of THE HAUNTING OF HILL HOUSE, nor is it as psychologically intense (or jarring!) as HANGSAMAN, but THE SUNDIAL is pure Jackson. And that, after all, is a dark and wonderful thing.
Read more
15 people found this helpful
Helpful
Report abuse
See all reviews