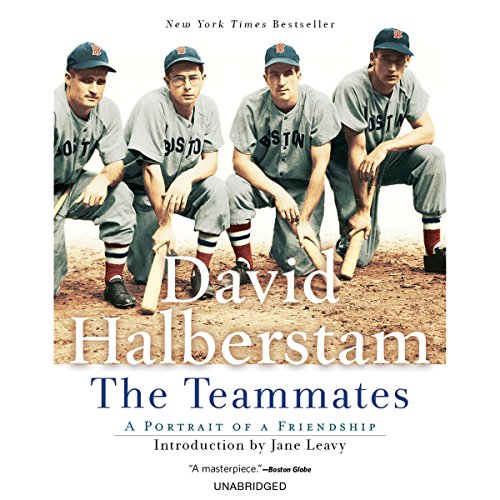 List Price: $22.80
You Save: $2.81 (12%)
By completing your purchase, you agree to Audible’s Conditions Of Use
Sold and delivered by Audible, an Amazon company
Share

4.5 out of 5 stars
4.5 out of 5
279 global ratings
How are ratings calculated?
To calculate the overall star rating and percentage breakdown by star, we don’t use a simple average. Instead, our system considers things like how recent a review is and if the reviewer bought the item on Amazon. It also analyzes reviews to verify trustworthiness.
Top reviews

Thomas Erickson
4.0 out of 5 stars Last car trip by 3 of his baseball friends to see the dieing Ted Williams
Reviewed in the United States on June 11, 2012
Verified Purchase
I'm a baseball Yankees fan but I knew about the great RedSox's Hall of Fame Ted Williams. INMO the best hitter of all time. Bought this book to learn more about him and his teammates who played with him.

The Teammates is a small 218 page book very well written by David Halberstam. David won a Pulitzer for his reporting in Vietnam and is the author of 13 best sellers, so I knew he was a great author. The Teammates is a fast paced book, with no boring parts that I read in one day. I couldn't put it down. It has some nice B/W pictures too.

We see the great Ted Williams dieing in a wheel chair with a leaking valve in his heart and other serious medical problems. Two of three old teammate best friends decide to drive over a thousand miles to see him for the last time before he passes away. Dick Flavin an ultra fan goes too. Bobby Doerr (RedSox Hall of Fame) can't make it as his elderly wife has had two stokes and he must be near her side helping her. The great Dom DiMaggio ( Yankee Joe DiMaggio brother) goes even though he had been fighting a severe crippling bone disease. The legendary contact hitter Johnny Pesky makes it too as well as the ultra fan Dick Flavin. The trip by car from Marion to Hernando took 3 days.

We see the baseball stories from all these great players and their history.

I really empathised with these men, now all old in their 80s when the book was wrote. This IS NOT just a baseball book. The reader is blessed reading a true friendship book and seeing that the great loud demanding " got to be the best in life" Ted Williams really needed the steady even tempered soft spoken Bobby Doerr to counter his life style. Also Dom, he called him Dommy, was his best friend he loved so much. Williams cant understand why he never was elected in the Hall of Fame. Little Johnny Presky a superb contact hitter with little power was nicknamed "The Needle" because of his long hooked nose on such a small frame. Together these great ball players were the core of the RedSox in the Redsox glory days.

You don't have to be a baseball fan to like this book. The emotions of these men toward each other are great. True friendship. Plus lots of baseball statistics and stories. I really liked this book 4 1/3 stars.
Read more
One person found this helpful
Helpful
Report abuse

Edward Thilborn
4.0 out of 5 stars Short but good book on friendships.
Reviewed in the United States on April 27, 2021
Verified Purchase
Jane Leavy gives the worst introduction in history: she immediately uses the F word 2x and "swell," which may be the worst word in the English language. Obviously, good English does not matter to her. However, this is a very good book on the players' friendships, but I would not pay more than $4 since it is short.
Read more
Helpful
Report abuse

Ted Williams, Bobby Doerr, Dom DiMaggio, and Johnny Pesky were all members of the famed 1940's Boston Red Sox. Their careers led the Red Sox to a pennant championship and ensured the men a place in sports history.
David Halberstam, had followed the members of the 1949 championship Boston Red Sox team for years, especially Williams, Doerr, DiMaggio, and Pesky. He met up with the fellas and learned about their friendship and their trip. He knew he wanted to write about it. David Halberstam gives us an inside look at how these four teammates became friends, and how that friendship thrived for more than 60 years.

The book opens with Johnny Pesky, Dom DiMaggio and , Dick Flavin a friend, on a 1300-mile car trip travelling to see the ailing Ted Williams in Florida. It's the last time they will see him. The journey is filled with nostalgia and memories, but seeing Ted is a shock. The most physically dominating of the four friends, Ted now weighs only 130 pounds and is hunched over in a wheelchair. Dom, without even thinking about it, starts to sing opera and old songs like "Me and My Shadow" to his friend.They had a short memorable time with Ted,and it was worth it. Every morning until the day Ted Williams died, Dom would call him with an update of the Sox.

"This book is filled with stories of their wonderful days with the Boston Red Sox, memories of plays and players, and the reaction of the remaining three to Ted Williams' death. The Teammates offers us a glimpse into the lives of these Red Sox men. and great insight into the nature of loyalty and friendship. The book tries not to dwell on the imposing power, problems, and slugging achievements of Ted Williams or reveal new sensational material or revelations. Halberstam focuses on the teammates' shared attributes: their desire to compete and succeed in baseball, their willingness to learn how to use physical/mental talents, how to provide for post-depression families yet display genuine appreciation and gratitude for each other's contributions and careers." David Johnson

For any Red Sox fan, baseball fan and David Halberstam fan this book is a must. A book of love of fellow man and baseball. It is a rare book that fills the reader with hope for the future of baseball.
Highly Recommended. prisrob 5-09-07
Read more
7 people found this helpful
Helpful
Report abuse
See all reviews

Telfer Wegg
5.0 out of 5 stars Perfect for the baseball fan of a certain age
Reviewed in Canada on November 19, 2020
Verified Purchase
Readable and compelling, with insights into humanity as well as into baseball.
Read more
Report abuse

Mike Roy
5.0 out of 5 stars Great!
Reviewed in Canada on January 25, 2018
Verified Purchase
This book is wonderful for any baseball fan new or old. The book arrived quickly and before the expected date.
Read more
Report abuse

Kindle Customer
4.0 out of 5 stars The importance of friendship
Reviewed in Canada on January 29, 2014
Verified Purchase
Well written book. Clearly illustrated the wonderful friendship experienced by four men and how it was supportive to them in good and challenging times. The story flowed well. I found I needed to read it to the end.
Read more
Report abuse

George E Georgian
4.0 out of 5 stars Four Stars
Reviewed in Canada on June 11, 2017
Verified Purchase
very good. as advertised
Read more
Report abuse
See all reviews
Back to top
Get to Know Us
Make Money with Us
Amazon Payment Products
Let Us Help You
EnglishChoose a language for shopping. United StatesChoose a country/region for shopping.
© 1996-2021, Amazon.com, Inc. or its affiliates