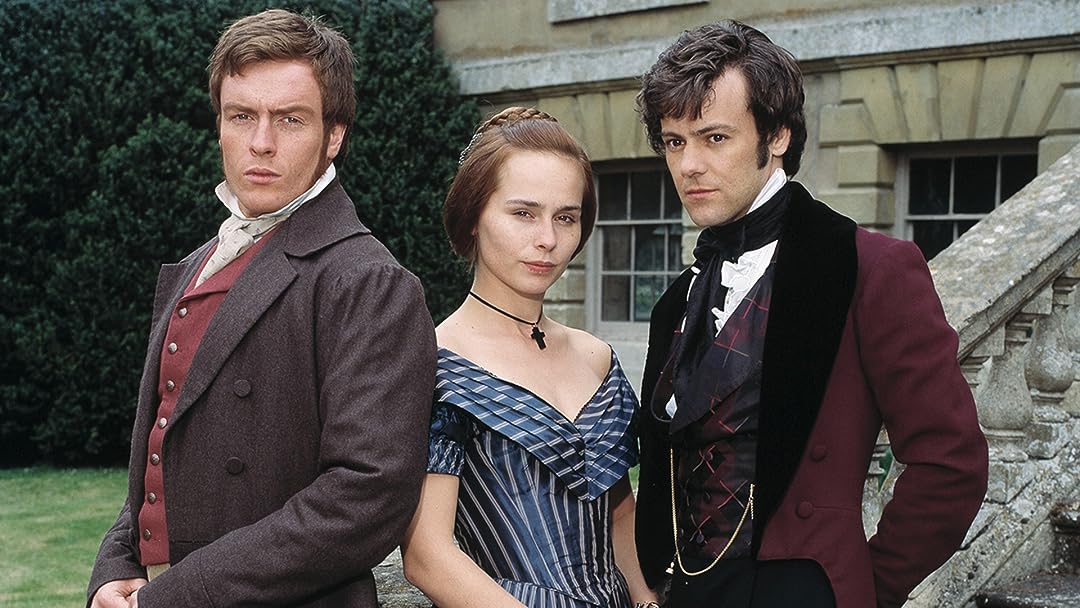 The Tenant Of Wildfell Hall

Season 1
(73)
1996TV-14
Anne Bronte's classic story is as unforgettable as those of her more famous sisters. In a remote village on the Yorkshire moors, a beautiful widow and her son move into the near-derelict Wildfell Hall. Befriended by a handsome farmer, she remains mysteriously silent about her past and why she is afraid - until she becomes the focus of malicious village gossip.

APeperReviewed in the United States on June 19, 2018
3.0 out of 5 stars
Good and Not so Good
I can't say that I really loved this series. The actress who played Helen portrayed her as very cold and virtually unlikable to me. Her husband, Arthur, is a truly awful man and the actor who portrays him does a fabulous job because even though he is awful you can see how at one time Helen could have fallen in love with him. The actor does the evil charm very well. I loved seeing Toby Stephens (Black Sails) as Helen's love interest, Gilbert. Toby has done a great portrayal of the myriad of emotions that Gilbert goes through during the 3 parts of the story. I loved the happy ending and the beautiful scenery of Wildfell Hall. However, some of the scenes are really dark and hard to see (especially if you are trying to watch it on a smaller device like a phone). The sex scenes were a bit much and not really what I was expecting to see on this type of series. All in all, it's a mixed bag; some good and some not so good. I think its worth a couple hours if you have nothing better to do and want to see a period piece.
33 people found this helpful

H WalkerReviewed in the United States on June 11, 2018
1.0 out of 5 stars
Don't Watch it if you Know the Book
Absolutely horrid. I love the book and many of the beautiful speeches and the depth and feeling which ought to have been easy to replicate were not only lacking but entirely absent. There were extremely long sex scenes, which vulgarized much of the sentimentality and delicacy of Helen's narrative.
BBC would do well to try this one again.
52 people found this helpful

PURPLEHAZEReviewed in the United States on December 19, 2018
3.0 out of 5 stars
Ok But Not A Favorite!
I have not read the book. Watched the movie adaptation via Prime Video. Typically,
I enjoy period pieces. Here the scenery was lovely, customes accurate and the main characters' acting was rather good. On the other hand, most of the supporting cast theatherical skills in this instance were quite lacking, e.g. Gilbert's mom & sister, the pastor and his daughter just to name a few. The story lagged in places and took forever to reveal the main mystery. Additionally, although I can't quite put my finger on it, there was just something missing that kept this from been a thrilling or captivating experience. On reflection, I recall 3 scenes with sexually suggestive content: the heroine's wedding night the groom is slowly kissing up her stomach, a woman's dress is raised above her knees as she's pushed against a wall and the wife is shove face done and the agressor starts feeling up her leg then stops. Alough not appropriate 4 children, I personally didn't find it "explicit" or inconsistent with the period. I mean this time period was filled with sex, violence, crimes against women and children, incest, rape, murder, and all kinds of debauchery and perversions. In facts, I found forcing a child to drink wine until he vomits and forcing him to recite raunchy & sexually suggestive poems much more offensive to my sensibilities. In any event, it an ok period piece but not one that I can honestly overly endorse for viewing.
14 people found this helpful

Alyssa A. LappenReviewed in the United States on July 26, 2019
4.0 out of 5 stars
Relevatory rendering of a marvelous feminist story
I'd never read The Tenant of Wildfell Hall but having watched this series, I now intend to do so, particularly since another reviewer complains that many of the gorgeous speeches from the original Anne Bronte novel are missing.

But what was here was well done, and certainly brought home the stark contrast between Gilbert Markham, who refuses to believe the town's gossip about this mysterious solitary artist who keeps to herself and sells her art in London, and Helen's husband, a reprobate womanizer and alcoholic who ultimately dies of his disease, but not before seriously abusing both his wife and young son.

True there are some annoying faults in this series, but hardly enough to ruin it, And in my case, the series stirred by interest in reading the original Bronte novel, a highly unconventional story, indeed shockingly advanced, for its time. It was unheard of for a woman to leave her husband and go off on her own in secret to earn her own living in a respectable manner, and it was even against the law.

AngieReviewed in the United States on August 5, 2018
5.0 out of 5 stars
Enjoyed. Well worth watching
I read the book many years ago as a very young woman, and I thoroughly enjoyed it. I liked it so much that I wondered why it had not been made into a film. I researched it and found there was a film which I managed to buy online. Browsing Amazon videos, I was shocked to come across a mini-series by BBC. It is a story by Anne Bronte, I suppose, that is not as well known as those written by the other Bronte sisters, though in my opinion, it is just as good. I couldn't wait to watch it. Having read the book and liked it, it was enough for me to enjoy the story all over again in movie form. The actors did a good job.
12 people found this helpful

Eddie BlackReviewed in the United States on June 8, 2018
4.0 out of 5 stars
not faithful to the plot but still worth your time
I really enjoy BBC period dramas so I was drawn to this one. Although it wasn't as good as some other BBC period dramas, such as Little Dorrit, it was worth watching. I did not give it 5 stars because I felt there was a bit of overacting on the part of several persons throughout the show here and there, particularly though with the actor who plays the scoundrel husband when he was throwing temper tantrums well into their marriage. I also did not give 5 stars because they changed the story in several instances from the original plot in the book, which always bothers me. I enjoyed however the setting, the scenery, and the costumes.
11 people found this helpful

JuliaReviewed in the United States on December 18, 2018
1.0 out of 5 stars
A long and boring story
Lets make it short - a drinking abusive husband with sociopath tendencies makes his wife's and his son's life miserable to the point that she runs away. Luckily, she meets her "knight" who saves her and loves her and she loves him back. (I was typing it less than 1 minute.) I'm normally greatly enjoying period pieces but not this one. It puts you in a gloomy depressive state even with an "ok" outcome for the main characters. P.S. The film composer should reconsider his career path because this monotonius funeral like inspired music doesn't add any "depth" to this movie, it actually makes it worse.
9 people found this helpful
See all reviews
Back to top
Get to Know Us
Make Money with Us
Amazon Payment Products
Let Us Help You
EnglishChoose a language for shopping. United StatesChoose a country/region for shopping.
© 1996-2022, Amazon.com, Inc. or its affiliates