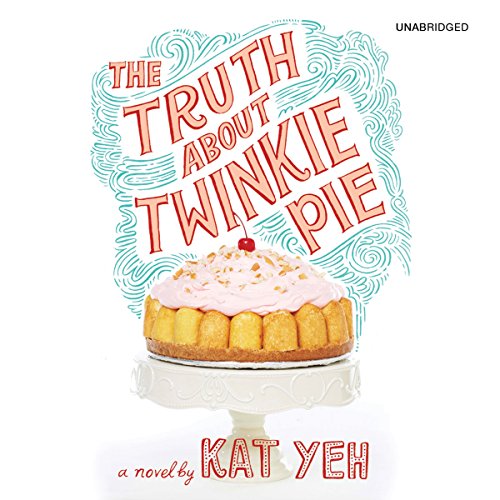 The Truth About Twinkie Pie

Take two sisters making it on their own: brainy 12-year-old GiGi (short for Galileo Galilei, a name she never says out loud) and junior-high-dropout-turned-hairstylist DiDi (short for Delta Dawn). Add a million dollars in prize money from a national cooking contest and a move from the trailer parks of South Carolina to the Gold Coast of New York. Mix in a fancy new school, new friends and enemies, a first crush, and a generous sprinkling of family secrets.

That's the recipe for The Truth About Twinkie Pie, a voice-driven middle grade debut about the true meaning of family and friendship.

Amanda B
4.0 out of 5 stars This book was so much more emotional than I anticipated.
Reviewed in the United States 🇺🇸 on August 23, 2020
Verified Purchase
This book was so much more emotional than I anticipated. While GiGi was kind of a little terror, I liked it anyway. GiGi is a twelve-year-old that has just moved to a new school. Her mom died and she’s being raised by her older sister, DiDi. I loved the sister relationship when it was good. It’s hard to have a sister that’s is also your parents, so I could understand GiGi’s attitude. But also, being the adult that I am, I just wanted GiGi to open up to her sister and talk to her.
GiGi’s biggest worry is that he’s not going to make friends at her new school. I loved that this was the smallest problem in the book. She quickly made friends and I loved these relationships. They were sweet and I could see them lasting long into adulthood. I liked that even the girl GiGi was ‘frenemies’ had an interesting outcome. Mace and GiGi butted heads a lot, but I thought it was an interesting and necessary relationship.
Overall, this story was sweet and heartbreaking. It made me feel so many things I was not expecting. I loved the characters and this story had so much heart. I loved the family values and friendships. Also, this book had recipes in it and I totally loved how they were tied into the story. So, keep an eye out for a books & baking post related to this one.
Read more
Helpful
Report abuse

Tmac
5.0 out of 5 stars Literary Genius! I LOVE THIS BOOK!
Reviewed in the United States 🇺🇸 on February 12, 2015
Verified Purchase
I just finished this book last night. What an outstanding piece of literary genius! I LOVE IT! I highly recommend this wonderful read to anyone who wants to be entertained, educated, and taken on an exciting ride. Kat Yeh is a truly talented writer, creative story teller, and teacher. I can't wait to see what she puts out next.

For me, this all began through a search for another great book to recommend to my early-teenage daughters. I was looking for one of those special books that they just won't put down - and I found it - not just for them but for me too! The author eases the reader into this story in a smooth, cool, and fresh way. The books begins very light-heartedly describing a childhood adventure. Then the reader is opened up to the potential of a first love combined with the challenges of a new town, new school, and new friends. Then WHAM! – the hammer comes down and you are off and running into a mystery combined with some serious issues and lessons of life. Loved the beginning, loved the twists and turns, loved the recipes (which are legit), and LOVED the ending! Truly Outstanding!

After seeing me devour this book in two days, my daughters have been bugging me to give it to them. I passed it on this morning to my 12-year old and I can't wait for her to post her own review! As they say, "the truth is in the pudding" or in this case "The Twinkie Pie." My guess is that she will not be able to put it down, and will have her review here in the next day or two.

I think Kat Yeh is an outstanding writer - in fact, dare I say it again, Literary Genius! I can't wait to see what she comes up with next. Get your hands on The Truth About Twinkie Pie - I guarantee, you will not be disappointed - and That's The Truth!
Read more
4 people found this helpful
Helpful
Report abuse

Kate Calina
5.0 out of 5 stars The Quest for Truth
Reviewed in the United States 🇺🇸 on June 17, 2017
Verified Purchase
When your life begins in a trailer park in South Carolina, relocation to the lively city of Long Island seems a bit daunting. When no one’s there for you but your big sister and her dreams, that move may become downright terrifying. But GiGi’s big sister is no ordinary woman. DiDi—short for Delta Dawn the Second—had been known to camp in a tent during a thunderstorm to get her little sister into “the best” school. Even crashing telephone poles couldn’t drive DiDi away.

In the South, GiGi had followed her sister’s advice. Lunchtime meant study time in the library in ratty old clothes. In upscale Long Island, GiGi’s ready for a change. She has a Recipe for Success: a bright new personality, a keen hope for new friends, and a willingness to do everything she’d never had a chance to do before.

When a sweet, handsome boy named Trip becomes her closest friend, GiGi knows she’s become part of something wonderful. Trip’s friends are not so welcoming. Mace glares at her with dagger eyes and seizes her first opportunity to make GiGi look stupid. While all the other moms play tennis or go shopping, GiGi’s mom is dead.

There’s an ache deep inside, an intense longing for her mother. Though her hopes stay locked away, GiGi’s searching for her. In beauty stores. In strangers. Even—especially--in the stars. GiGi stands for Galileo Galilei, and there’s a part of her that always gazes at the stars.

D. Jacobson
5.0 out of 5 stars Irrisistabley delicious!
Reviewed in the United States 🇺🇸 on February 5, 2015
Verified Purchase
GiGi Barnes never knew her mama. All she has are the recipes mama kept and her sister DidDi makes to keep Mama's memory alive. GiGi was raised by DiDi. After winning a lottery, they move from a quiet town in North Carolina to a ritzy town in NY so GiGi can get a great education. This is the "Recipe for Success" they planned. At first GiGi hates leaving the only home she's ever known. As she begins to make friends, she breaks away from DiDi's tight hold and forges her own success plan. Soon she begins to learn more about herself and the mama she never knew.
This is a delightful and heartwarming story of love, loss, sacrifice, and what it means to be a family. GiGi's voice is pitch perfect 'tween, as are those of her classmates. The easy to follow recipes at the end of most chapters are a charming and unique addition. They bring out "mama's character in a way straightforward prose wouldn't. This is a book middle grade kids will enjoy. Try the impossible coconut pie...impossibly delicious!
Read more
3 people found this helpful
Helpful
Report abuse
See all reviews