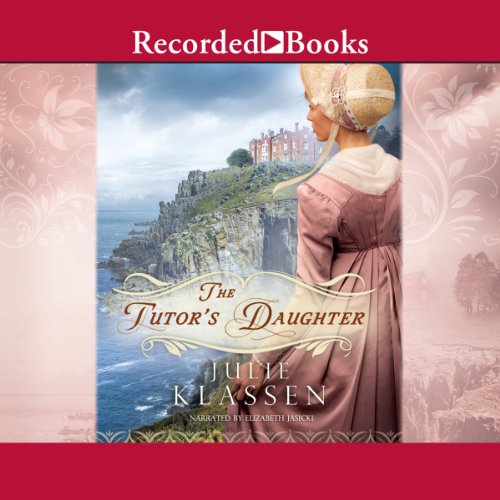 RITA finalist and Christy Award winner Julie Klassen draws high marks from fans for her meticulous attention to detail in her inspirational historical romances. With The Tutor’s Daughter, Klassen sweeps listeners away to the blustery Cornwall coast, where Emma Smallwood and her widowed father take up residence with a baronet and his four sons. As Emma begins teaching the two youngest boys, she becomes plagued by mysterious events. Vowing to solve this mystery, she also finds her heart stirring with feelings for one of the elder brothers.

Stephanie McCall
5.0 out of 5 stars The Perfect Late Summer Romance with a Dash of Gothic Mystery
Reviewed in the United States 🇺🇸 on September 1, 2020
Verified Purchase
The Tutor's Daughter is what might happen if Northanger Abbey and The Secret Garden had a baby, and maybe if Persuasion were its auntie. In my revisits of Julie Klassen's books, this is one of my favorites. The romance between Emma and Henry combines timeless and unique, and the mysterious elements add some delicious intrigue to the windswept, sometimes melancholy Cornwall setting.

I found a literary soul sister in Emma Smallwood. At first I thought that was just because we would both be considered "spinster bluestockings" in Regency England--ladies who loved to read and study but often found ourselves at sea with socialization. But as the book progressed, I saw myself in Emma's need for order and control, too. That's why I felt conviction regarding her spiritual journey, but also rooted for her to learn and grow--because I found myself rooting for the same things in my own life. (Hopefully though, it won't take a near-drowning in a cliffside chapel in my case). :)

Henry Weston was Emma's perfect hero, though a bit of a surprise as far as heroes go. That is, if I were Emma, I too would stay as far as possible from the grown up boy who pranked and teased me mercilessly in school--and not only school, but my own home, no less! The nerve! I didn't blame her for comparing Henry to the north wind at first, but if north wind Henry is, he is the bracing, refreshing kind. A perfect gentleman, yet bold and unafraid to stand up for those he loves and what is right, he made me swoon in an understated way. But sometimes understated heroes are the best.

I loved the secondary characters too, mostly because the majority were unpredictable. Emma's comparison of the four Weston brothers to the four winds was a clever bit of symbolism, and it works wonderfully whenever we see the brothers on the page. Without giving away anything, I too tried to guess who was who, and found myself pleasantly though not unexpectedly surprised. As with all good suspense, the solution makes sense once you see it, but until then, guessing and puzzling things out is fun. Those secondary characters gave me a lot to puzzle over, especially Lizzie (was she a "good guy" or a "bad guy") Derrick Teague (how did he fit into the rest of the story) and even Adam (again, where did he fit in)?

Speaking of Adam, I must applaud Julie for his character. I had a lot of mixed feelings, because as a modern reader, I hated the idea of Adam being raised elsewhere just because of a disability. I was also ready to say some Very Bad Things to Lady Weston and the Penberthys on his behalf. But, no such thing as politically correct history and all. For their era, the Westons mostly did the best they could--looking at you again, Lady Weston! And as for Adam himself--well, I'm not entirely on board with his savant characteristics because people still tend to think that all people like Adam are savants. But I liked how those skills were allowed to make up his whole character, and Adam does come across as three-dimensional. I felt terrible for him, but I never felt he was a helpless victim. Instead, I felt that with people like Henry and Emma supporting him, he could excel.

The spiritual threads here are fairly subtle, but well done. There were many times Henry could've preached at people, and sometimes I admit I kind of wished he would. Mostly though, we see the difference between relying on God and ignoring Him through characters' actions. It's allowed to happen organically, which invites readers to think through implications themselves. Emma is a great example, in that she shuns God for taking her mother, yet seems to think He will treat her just as that critical parent did. I loved seeing her learn the opposite is true--because I have to relearn that fairly often. Another good example is Sir Giles, who struggles to lead his family and pays the consequences of his attitude, but is given a second chance.

All this happens in a beautiful, and as I said intriguing, setting. Throughout The Tutor's Daughter, I could feel the sea winds and hear the ocean crashing against the cliffs, or the warning bell trying to shelter sailors and civilians from unexpected storms. I wanted to visit the Weston manor, maybe poke around and stir up a little intrigue for myself. Failing that, I'd have loved to share a book and cup of tea with Emma, or play chess or "battles" with Emma, Adam, and Henry. If I couldn't do that in real life, this novel was the next best thing. It gets my enthusiastic recommendation.
Read more
4 people found this helpful
Helpful
Report abuse

Tammy
5.0 out of 5 stars Wonderful
Reviewed in the United States 🇺🇸 on January 16, 2023
Verified Purchase
I loved The Tutor’s Daughter.
It had everything I love romance, books, mystery…
The characters were so good Emma was a amazing ,caring, beautiful quiet, loving heroine and Henry ( Swoon) one of Julie Klassen’s best!! I love how her cared for his family and Emma.
The Faith in this book was so good and woven throughout.
Loved the secondary characters except for a couple!
The love story between Henry and Emma was so so good!! It was my favorite part and
The church kiss, Amazing!
Read more
Helpful
Report abuse

Lombni
4.0 out of 5 stars It has everything
Reviewed in the United States 🇺🇸 on October 26, 2022
Verified Purchase
I think this is one of the best novels by Klassen, it's a mixture of many novels by Jane Austen. Mystery, danger, romance, but in this one, the couple gets to have several moments to share and converse unlike other novels by Julie when they hardly see each other.
The ending was perfect and the romance was clean. Reading it before going to sleep seams the perfect moment as it adds to the mystery and gothic theme of the novel, I believe. Anyways, I totally enjoyed this one, feels just like watching a good regency film.
Read more
One person found this helpful
Helpful
Report abuse

gb1
5.0 out of 5 stars Great reminder to pray
Reviewed in the United States 🇺🇸 on October 15, 2022
Verified Purchase
I enjoyed the romance, the intrigue and the gentle presence of the Lord. I liked struggling with faith matters along with the characters. Great reminder that prayers are always heard but then we have to listen for the answer.
Read more
Helpful
Report abuse

Susan Snodgrass
5.0 out of 5 stars Julie Klassen Dishes Up Another Winner!!!
Reviewed in the United States 🇺🇸 on January 1, 2013
Verified Purchase
I own every single one of Julie Klassen's books. After reading and loving the first, The Lady of Milkweed Manor, I never even read the synopsis. Her name on the cover is enough to make me buy the book.

Emma Smallwood's father runs an academy for boys in his home. After his wife dies, he seems to lose interest and no more pupils apply. He gets a letter from a former client whose 2 eldest sons attended his school, asking him to come to the manor house and live in as teacher to his two youngest sons. Emma is invited to come along, although she feels a few qualms, since one of the eldest boys, Henry Weston, lived to pull pranks on her.

When they arrive, they seem not to be expected, everyone seems ill at ease but they are invited in. Emma soon begins to suspect there are serious problems in this household; strange visits in the night to her room, things moved about and oddly comforting music coming from downstairs in the wee hours of the morning, which no one will admit to playing. Things are not right in the Weston household.

I will give away nothing more of the plot so it will not be spoiled for others who haven't read the book. This book is brooding and dark at places and carries the reader away along on the wave of suspense and heartache of the characters. It feels for the world like the darkness and fear in the old Orson Wells/Joan Fontaine version of Jane Eyre.

I was pulled back to the book nearly every time I laid it down. This would make an excellent movie or miniseries for television. It's just that good.
Klassen writes well, going into much detail, never leaving the reader to try to figure out everything for themselves. We get a good bit of history also, which this reader loves.

You can't go wrong buying a Julie Klassen book. Don't hesitate one moment to buy this book. If you've never read any of her books, and read this one, you will soon be buying the rest of her books!
Read more
5 people found this helpful
Helpful
Report abuse
See all reviews

McKenzie
5.0 out of 5 stars The Tutor's Daughter - Julie Klassen.
Reviewed in the United Kingdom 🇬🇧 on August 15, 2019
Verified Purchase
Fabulous read from Julie Klassen. Have read several of her books and this one does not disappoint. Great Novel and couldn't put it down read! H.
Read more
Report abuse

Ellen O'Donnell Shanks
4.0 out of 5 stars Quite interesting
Reviewed in the United Kingdom 🇬🇧 on October 4, 2019
Verified Purchase
Very interesting overall. A mixture of intrigue, romance, various plot etc. I loved the characters of Adam and Henry. They were very alike in many ways.
Read more
Report abuse

Amazon Customer
5.0 out of 5 stars Beautiful novel!
Reviewed in the United Kingdom 🇬🇧 on March 4, 2014
Verified Purchase
I thoroughly enjoyed the book. Its full of suspense and romance. I definitely recommend if you need a good book.
Read more
2 people found this helpful
Report abuse

Derek
5.0 out of 5 stars splendid new reading
Reviewed in the United Kingdom 🇬🇧 on January 21, 2014
Verified Purchase
introduction to another good writer and a good tale for the winter.Also at nice price to add to my Amazon collection
Read more
One person found this helpful
Report abuse
See all reviews