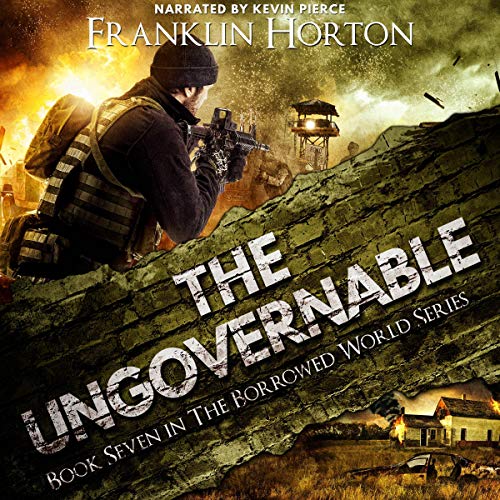 Having lost both a hand and his entire team when Jim Powell and his friends attacked the power plant, Boss is obsessed with revenge. He had no idea who the men were, but he’s determined to launch a search for them until his command makes it clear that his mission of vengeance is not a priority.

Undeterred, Boss arrives at a covert method of engaging the entire population of southwest Virginia in his hunt for the insurgents. He has fliers scattered in the communities around the power plant offering a reward of food and ammunition for the live capture of the lone man whose image was caught by a security camera.

The rampant rumors surrounding the attack at the plant work against Jim. His name is whispered everywhere that people gather. Almost overnight, he and his friends find themselves under attack from desperate neighbors determined to collect the reward.

4.7 out of 5 stars
4.7 out of 5
388 global ratings
How are ratings calculated?
To calculate the overall star rating and percentage breakdown by star, we don’t use a simple average. Instead, our system considers things like how recent a review is and if the reviewer bought the item on Amazon. It also analyzes reviews to verify trustworthiness.
Top reviews

Joey.Nakata
5.0 out of 5 stars Action packed emotionally charged read!
Reviewed in the United States on November 13, 2019
Verified Purchase
I feel like a broken record when I review Mr Horton’s books. I can’t help it. I love his writing style. This book is another amazing read. I was in the edge of my seat, I was crying, cheering and very angry in parts. For me it was very emotional. He writes “high octane” thrill rides very well! I look forward to every book that comes from him. Definitely read this series! You will not be disappointed, you will be sucked in and won’t want to put it down.
Read more
7 people found this helpful
Helpful
Report abuse

H. Bala
TOP 500 REVIEWER
5.0 out of 5 stars "Jim kills the messenger."
Reviewed in the United States on March 25, 2020
Verified Purchase
I always get stoked whenever I dive into a Franklin Horton read. Ain't no different with The Ungovernable, the seventh volume in Horton's Borrowed World grid-down, post-apoc series. Given, the Mad Mick books have pretty much taken over as my favorite series in this shared universe. But Jim Powell remains a baaaaad man, and I'm still keen on the goings-on in Jim's valley and its outskirts.

If the book title had a subtitle, it'd be "It's all Jim's fault." In the last book, Switched On, word had reached the valley of the government's offer of aid, with the caveat that those requiring help must turn in their guns. Jim Powell, abrasive and misanthropic and distrustful of those in authority, didn't take this too kindly. Old boy leaned towards isolationism and was prone to being antisocial, anyway. He reasoned, angrily, why must he disarm in order to access resources he had already paid for with his taxes?

And maybe blame Jim's wife a smidge. It was she who convinced him to take on a leadership role in the valley. Jim always was a man to take quick action. Heck, when he's described as a troubleshooter, Jim retorts, "Yeah... I'm a troubleshooter. When I see trouble, I shoot it." Heh.

And it was Jim who spearheaded the assault on the power plant to take out communications. And power plant went ka-boom. Folks got killed. And things settled down for a minute.

It's late spring now. Snow's thawed in the valley. And the valley folks can finally stretch their legs. Maybe take a ride to the neighboring town...

Thing is, plenty of folks didn't cotton to Jim's stand for freedom, his hubris. And my two cents is that I don't blame them folks. One of Jim's friends, Lloyd the banjo guy, plays devil's advocate. He tells Jim: "Assume that your mom and dad didn't have you taking care of them. What if they were facing a slow, undignified death by starvation and the comfort camps could have stopped that? How would you feel about someone ripping that away from you?" Banjo guy argues a good point.

Maybe these desperate, starving townspeople, who'd barely survived the harsh winter, would've taken action on their own, anyway, and gone after Jim. But while Jim and his group were riding out the winter in the valley, the government's been circulating a mess of wanted flyers. The bounty put on Jim Powell's head - for domestic terrorism - rewards his captors with one year's food supply plus ammo.

Yeah, this book packs in the action as those hunting Jim come out of the woodwork and come in waves, taxing the valley's defenses, testing the unity of Jim and his neighbors. As ever, I'm paying attention to whatever nuggets of wisdom the post-apoc author imparts. With Jim being a diehard prepper, I was craving more details about his solar improvements, and gravity fed water, and a dairy with a spring box, and so on. But I also recognize Horton's knack for storytelling. The suspense was crazy in this one, and I appreciate Horton's showing that his characters' actions have grave consequences, and that Jim's perspective can't always be trusted. Anyway, a great read. I'm anticipating a future story arc in which Jim goes to Beartown Mountain to look for the legendary cave mentioned in this book.
Read more
One person found this helpful
Helpful
Report abuse

Pam Shelton-Anderson
3.0 out of 5 stars A let-down
Reviewed in the United States on August 26, 2021
Verified Purchase
I have enjoyed this series a lot up to this point, but found this book to be a let-down. There was a major editing error when a group from the valley go to town to see if they can trade some goods. Sara was part of that group and it was said she "was doing a lot better after Randi gave her some tough love, basically telling her to snap out of it or crawl off to die somewhere." Nope! In a previous volume, it was Charlotte, Gary's daughter who lost her husband Dave and went into a debilitating depression prompting Randi's harsh but effective comment. Sara was also Gary's daughter and was married to Will. I was sorry to see that Boss survived and even sorrier how much time was spent on his planning, his prosthetic and everything that he did to seek revenge. I was mostly sorry that Jim has been completely boxed in by the story to have become a pariah. He wasn't alone on the escapade to stop the group that murdered the people at the substation and eliminate the threat posed by the power plant which did not have any wellbeing of the inhabitants of the area in mind. That part of the story is not even mentioned again, though the murdered people were friends and neighbors of the town and of Kyle the lone survivor. The town is mad at Jim who is mad that they don't see that the desire for electricity and suspension of some freedom is a socialist trap (SIGH). Jim was such a central character, willing to work hard and do what was necessary to save his family and tribe, but I don't know where he can go from here. I am starting to wish that I had stopped with book 6.
Read more
Helpful
Report abuse

AJT
3.0 out of 5 stars Ok. Not up to previous books, IMO.
Reviewed in the United States on January 27, 2020
Verified Purchase
I really like this series, but this book was just ... ok. I kinda thought the time spent on the antagonist, Boss, was unnecessary, and it didn’t really build on the character or make me understand his motives better. And unfortunately half the book is devoted to him and his corrupt efforts to find our guy, Jim. I would’ve been more interested in how other areas were handling the power outage and the government’s disarmament-for-electricity scheme, but that didn’t get much treatment or develop much in this book. It’s not a bad book, just not up to the previous ones, in my opinion. Won’t stop me from reading future books. Would just like to see some more development of the overall picture.
Read more
2 people found this helpful
Helpful
Report abuse

Ron E. Bowman
5.0 out of 5 stars Bloody and Real
Reviewed in the United States on November 18, 2019
Verified Purchase
A real page turner, or in my case an iPad page tapper. The Borrowed World Series is likely the best Prepper Fiction written to date. Franklyn Horton is truly one of the best American novelists of our generation. This is a fast paced thriller. I would suggest this series to anyone who thinks they need to prepare for the bleak future in store for US. I suggest you start from book 1, the tips for survival are loaded in the first 3 or 4 books. Nice job Franklyn.
Read more
3 people found this helpful
Helpful
Report abuse

JVMD
5.0 out of 5 stars Wonderfully written, great characters and plot. Every new book is in the "gotta get it" list.
Reviewed in the United States on January 13, 2020
Verified Purchase
It seems that Horton continues to soar in his power as a writer in the dystopian post-apocalyptic genre. I have no regrets, at all, for having discovered Horton as a writer I've followed as a reader who "must have" every new book he comes out with.

I'm so glad I met him during a "local authors" day at the public library in Lebanon, VA, or, as we call it down here,
I went for some "shake and howdy" with Franklin. He's just a special guy.
Read more
2 people found this helpful
Helpful
Report abuse

Anonymoose
5.0 out of 5 stars Excellent story line!
Reviewed in the United States on November 16, 2019
Verified Purchase
There were a couple times at the beginning that I really had to slot through, but that wasn't the author's fault. Ok, well, not his writing anyway. Just the fact it took forever to put this one out! LoL I had to go back and read the last book, again, and that's not a complaint. Thanks for the good read, and I look forward to many more in the series! *winkwink*
Read more
One person found this helpful
Helpful
Report abuse
See all reviews
Back to top
Get to Know Us
Make Money with Us
Amazon Payment Products
Let Us Help You
EnglishChoose a language for shopping. United StatesChoose a country/region for shopping.
© 1996-2021, Amazon.com, Inc. or its affiliates