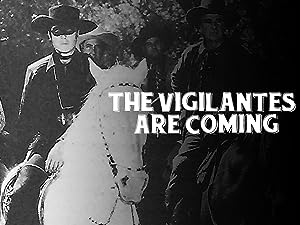 The Vigilantes Are Coming

Season 1
(17)6.1193613+
A masked hero called "The Eagle" leads California ranchers in a struggle against Russian Cossacks who are plotting to take over California and turn it into a Russian colony.

Included with Best Westerns Ever on Amazon for $1.99/month after trial

Watch with Best Westerns Ever
Start your 7-day free trial
Add to
Watchlist
Redeem a gift card or promotion code
By ordering or viewing, you agree to our Terms. Sold by Amazon.com Services LLC.
Write review

Stanley Kohl;Reviewed in the United States on July 4, 2013
5.0 out of 5 stars
VCI's DVD: better image, but print source still a problem
Verified purchase
"The Vigilantes are Coming" is a 12-chapter serial, released by Republic Pictures in their first year, 1936, directed by Mack V. Wright and Ray Taylor. The screenplay is by John Rathmell, Maurice Geraghty and Winston Miller, the story by Maurice Geraghty and Leslie Swabacker.

General Jason Burr (Fred Kohler) has discovered gold, in 1840's California, and plans to become dictator, negotiating with Count Raspinoff (Robert Warwick), special emissary of the Tsar, to provide military support and make California a Russian colony. Don Loring (Robert Livingston), returning home after guiding Captain Fremont (Ray Corrigan) on his expedition to the Pacific Northwest, finds his father and brother have been killed, and Sonoma Valley oppressed by Burr, who has been abducting people as slaves to operate his gold mine. With help from Father Jose (William Farnum) of the local mission, Don becomes "The Eagle," masked vigilante who conceals his true identity by posing as a meek organist at the mission.

History takes several hits here, but the serial was made in the wake of "The Phantom Empire" so a little lunacy is to be expected. Some of the cliffhangers involve fairly extreme "cheating" where the changes made to save the hero from certain death would have been noticed even with a week between chapters. Still, the plot moves along quite well, and Robert Livingston is fine as the Zorro-like hero, with good support from the rest of the cast. Burr has imprisoned a mining engineer, John Colton (Lloyd Ingraham) and his daughter Doris (Kay Hughes), both of whom get rescued a couple times. Burr's main henchmen are Rance Talbot (John Merton) and Boris Petroff (Bob Kortman), while The Eagle is aided by Salvation and Whipsaw (Raymond Hatton and Guinn "Big Boy" Williams) who provide fairly-restrained comic relief. Several actors familiar from other serials and "B" movies appear in smaller roles, including William Desmond, Yakima Canutt, Stanley Blystone, Jack Ingram, Al Taylor and Robert Walker. The photography is first rate, with some fine effects, like the "eagle shadow" melting into the hero's in the first chapter. The musical score, under the direction of Harry Grey, combines Republic's "stock" music with Liszt's "Les Preludes" and Beethoven's "Egmont" overture, all integrated reasonably well with the action.

VCI's DVD edition, # 8836 is on a single disc, double layer. The source print appears to be the same one used for VCI's VHS edition, # 1714, though the DVD transfer is considerably better. The image is reasonably sharp, but the gray scale is limited, and the low contrast used for the transfer makes the opening titles look quite muddy, giving a poor first impression. The picture improves during the chapters, if details are hard to see in the darker areas. Better prints are not likely to be found, since Republic's old VHS edition had similar problems, and was one of their few releases NOT claimed to have been "Digitally Restored from the Original Negatives." VCI's sound was also initially disappointing, lacking in high frequency content which muffles the dialogue, and no captions are provided. Boosting the treble above 2 KHz helps quite a bit, without significant increase in noise, and the low frequency response is an improvement over Republic's old release, giving a fairly satisfying fullness to the music. So with a little adjustment the sound is fine. Framing is marginal on the chapter recap text, but it is all there on monitors showing the bottom of the frame. And unlike some of VCI's other DVD's, the text is not turned into a slide-show; it remains an honest transfer of movie film. Somewhat surprising for a VCI release, no "bonus" features are provided.

Republic Home Video's edition on VHS, # 5071 was issued in 1993 on two cassettes, dubbed at SP speed. It was transferred with higher contrast than VCI's DVD, but gray scale is similar, and highlights tend to burn out, with a few blank faces in some chapters. The opening titles are less murky, and reduced in size to keep the text well-within the boundries of television screens. The sharpness is good for a VHS release, though it can't match that of VCI's DVD. The sound is crisp enough and has little distortion, but with a constant low-level crackle, frequency response that makes it sound a little "tinny," and a lot of "wow" in Chapter Seven, possibly from poor processing when the release print was made.

Alpha's DVD, # ALP 4891D is on a single disc. The picture has a "VHS" quality to it, with a head-switch glitch at the very bottom of the frame, apparently copied from Republic's tape since it has similar appearance and the same minor defects in the picture, crackle in the sound and the woeful wow in Chapter Seven. The sound is slightly out-of-sync, but only about a quarter second behind the picture. The transfer added a little video overshoot from sharpness enhancement, causing objects to be slightly "outlined" and accentuating details like grass and shrubbery. The picture is stretched a little horizontally during the chapter introductions where Alpha "de-matted" the image, which had larger margins on the sides. They also added their logo in the upper-right corner during the opening titles and credits. While the picture looks good for an Alpha release, their sourcing of it from a 1990's commercial VHS tape is not commendable, legal or not, and the tape had a cleaner image.

This is an entertaining serial, and if the plot can't be taken too seriously it isn't beset with the kind of "comic relief" characters present in other early Republic productions. It is best watched with some time between chapters so the "cheating" of the cliffhangers isn't as obvious. While VCI's DVD isn't as spectacular as had been hoped, the sharpness, control of highlights and sound are an improvement over the other editions, and the serial itself is easily worth a 5-star "I Love It" rating.

Mr. W. ROGERSReviewed in the United States on June 27, 2008
5.0 out of 5 stars
western serial
Verified purchase
I give this dvd 5 star rating and it is very good with every chapter
annd plenty action , the print is very good also the sound and for the price you would not get better. it is very interesting if you like serials and well worth watching and for alpha it is a very good one and worth the price all the way
6 people found this helpful

Bo EdmondsReviewed in the United States on September 21, 2020
5.0 out of 5 stars
Good DVD
Verified purchase
Love the DVD and came with no problems.

R. NoonReviewed in the United States on December 7, 2014
5.0 out of 5 stars
Still love it.
Verified purchase
Saw this when I was a kid on The Captain Midnight show (the first CM show that showed many Republic chapter plays). Loved every second of it then, and apparently I haven't grown up much, because I still love it.

Richard H.Reviewed in the United States on November 8, 2011
3.0 out of 5 stars
Basic DVD
Verified purchase
I liked this serial. Lots of action and better acting than in a lot of those old serials. This is a very simple DVD without any extras. For some odd reason, I couldn't "rewind" when I missed a scene. Sounds quality good. Picture quality on one episode was bad, but the rest were good considering that this serial was from the mid 1930s.
One person found this helpful

plotzReviewed in the United States on August 17, 2012
1.0 out of 5 stars
cliche
Verified purchase
Thet were good for young kids who are too young to see the low quality acting and writing. I'm sorry I bought it. No one will buy it. I'm stuck wth it. Save your hard earned money for something worthwhile. The old saying you get what you pay for is true.

The MaverickReviewed in the United States on May 19, 2020
2.0 out of 5 stars
Image quality issues with VCI DVD
I've had good luck with VCI serials in the past, but this one is plain unwatchable. The picture is blurry, pixelated, and pale. The Alpha Video version is worse as it includes a watermark logo on the picture.

I added a photo of the screen. There are extensive artifacts around the text, as you can see. It actually looks a little worse on the TV as some of the artifacts are blending in on the photo.

UPDATE: I've had some luck improving the picture a bit by adjusting my TV's default settings consistent with what I would use for playing back an old laser disc - however, I don't need to make these adjustments to watch other 30's and 40's serials on DVD (and I have a bunch). So I have upgraded the rating a notch, but one shouldn't need to make TV adjustments to be able to watch just one serial.

J. LovinsReviewed in the United States on November 19, 2005
5.0 out of 5 stars
"The King of Serials...VCI Entertainment ~ The Vigilantes Are Coming (1936)"
VCI Entertainment and Republic Pictures present..."The Vigilantes Are Coming" (1936) (Dolby digitally remastered), a 12 Chapter cliffhanger from an action packed Republic serial featuring an outstanding cast with Mack V. Wright and Ray Taylor at the helm....story line is in 1844, California in the last days of the Dons...it's carefree people dancing under the summer sun...and who is the masked hero they call "The Eagle" (Robert Livingston)....will he lead the ranchers of California against the Russian Cossacks who are planning to turn the territory into Russian colonies, does this mean we will become under the rule of Russia...can the evil General Burr (Fred Kohler), Russian Count Raspinoff (Robert Warwick) along with his henchman Yakima Canutt, Bob Kortman, John Merton and Bud Osborne who always follow dastardly instructions succeed in taking over California...what part does Salvation (Guinn "Big Boy" Williams), Whipsaw (Raymond Hatton), the Vigilantes and Doris Colton (Kay Hughes) play in this adventure during the early days of the west where there was treachery at every turn...some hard riding and outstanding stuntwork by the entire Republic stunt people, making Bob Livingston look good in every episode....don't leave the theater until the final chapter is over and done with "Fremont Takes Command"....just remember double thrills, chills, mystery and suspense...hitting the bull's eye with excitement...don't miss a single spine thrilling episode..return next week to this local theater for another episode of action and adventure that will keep you thrilled until the next chapter.

Great job by VCI Entertainment for releasing "The Vigilantes Are Coming" (1936), the digital transfere with a clean, clear and crisp print...looking forward to more high quality releases from the vintage serial era of the '30s, '40s & '50s...order your copy now from Amazon or VCI Entertainment where there are plenty of copies available on VHS, stay tuned once again for top notch action mixed with deadly adventure from the "King of Serials" VCI...just the way we like 'em

Total Time: 225 mins on 2 VHS ~ VCI Entertainment 1714 ~ (11/01/2000)
6 people found this helpful
See all reviews
Back to top
Get to Know Us
Make Money with Us
Amazon Payment Products
Let Us Help You
EnglishChoose a language for shopping. United StatesChoose a country/region for shopping.
© 1996-2021, Amazon.com, Inc. or its affiliates