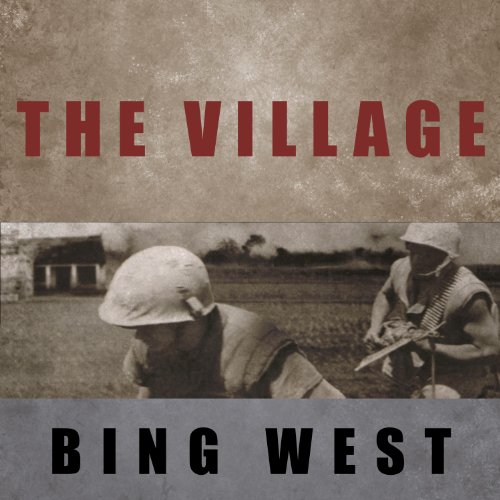 Few American battles have been so extended, savage, and personal. A handful of Americans volunteered to live among six thousand Vietnamese, training farmers to defend their village. Such "Combined Action Platoons" (CAPs) are not a lost footnote about how the war could have been fought; only the villagers remain to bear witness. This is the story of 15 resolute young Americans matched against two hundred Viet Cong; how a CAP lived, fought, and died; and why the villagers remember them to this day.

Special invitation from Audible!
Learn more about Membership
List Price: $24.95
You Save: $3.12 (13%)
By completing your purchase, you agree to Audible’s Conditions Of Use
Sold and delivered by Audible, an Amazon company

imanamvet66
5.0 out of 5 stars Very accurate.
Reviewed in the United States on November 27, 2019
Verified Purchase
Vietnam 1966-67 1st. Bn. 5th. Marines. CAP. I Corps (Chulai).
In the book these Marines were in a fort kinda, we had a compound. They, the Marines in the book were in a large village. We, my Marines were in a more isolated smaller village doing the same thing as in the book. This is a book on what we CAP Marines did and is true down to the smallest details. 14 months I served in "CAP".
I am at 73yrs and still up every two hours each night. This book is very very well written and true. Semper Fi my CAP Brothers!! Welcome home.
Read more
10 people found this helpful
Helpful
Report abuse

will5967
5.0 out of 5 stars NOT Your Run of the Mill Book About the Vietnam War
Reviewed in the United States on March 15, 2015
Verified Purchase
What most impressed me about this book is that it is told not only from the point of view of the small group of hand picked American Marines who helped to defend "the Village," but because the author also devotes quite a bit of the narrative to the many local Vietnamese who took part in the factual events being depicted.

Many readers may have to exercise quite a bit of patience at first however, because despite a well structured framework, much of the first third of the book focuses almost exclusively on the night patrols that the Marines and their South Vietnamese allies were so often required to engage in throughout the war. As a result, the narrative sometimes seems to get lost in all the details, as one account of lying in wait for the enemy in the pitch black jungle night often feels very much like all the other, quite similar accounts. And if you're like yours truly, you may actually be more interested in the real life characters than all the obligatory military details and jargon. But don't let that deter you. Francis J. West Jr.'s The Village is still a very engrossing and highly educational read.

And honestly, it's hard to fault the author too much on account of the mostly monotonous details about all the mostly monotonous night patrols American soldiers had to endure in Vietnam, because all that gritty martial stuff is of course highly integral to telling the unique story of all the vivid characters that the author somehow manages to render so very exquisitely. And thankfully, as the narrative progresses, and with the introduction of a number of new characters and situations, everything in the book starts to feel a great deal more immersive, intimate, and truly quite riveting.

In fact, what author Bing West does best in The Village, is give readers an up close and very personal view of what life "in country" during the Vietnam war was really like. Yes, in my humble estimation, West seems most adept (and masterful, really) at rendering his highly authentic portraits of American and Vietnamese soldiers and civilians. Remarkably, neither side is automatically vilified or presented as cardboard cutout heroes or villains, and a more than worthy attempt is made in almost every case to paint a realistic picture of each and every individual presented in the book.

Best of all, this is not your run of the mill book about the Vietnam War! So I can only highly recommend it to absolute anyone, whether they have any interest in the Vietnam conflict at all or not. All the real life individuals (friends, foes and otherwise) that are chronicled in The Village are portrayed in a very no nonsense and unbiased fashion, and ultimately, that is what makes The Village such a highly memorable and truly outstanding read.
Read more
12 people found this helpful
Helpful
Report abuse

Mustang45
5.0 out of 5 stars About The Village
Reviewed in the United States on October 10, 2014
Verified Purchase
To some, the Vietnam War was a chance for medals, promotions, and one day a star on their shoulder. To most, serving in Vietnam was their duty—a patriotic chore to serve their country. Along the way, a student of the Vietnam War will find countless demonstrations of raw courage and heroism: servicemen of all of our Armed Forces, giving of themselves for a greater purpose. Of course, nearly sixty thousand of our young men gave the ultimate sacrifice. Many more gave up their limbs, or suffered debilitating wounds —and from a psychological perspective, everyone left a part of themselves in Vietnam. However, few gave more than a squad of Marines assigned to protect the Vietnamese people living in a small coastal village, then named Binh Nghia.

This is a remarkable story told to us by former Marine Captain Francis J. “Bing” West, who later served as an assistant to the Secretary of Defense, and in the Reagan Administration as an Under-secretary of Defense. When Bing West returned to Binh Nghia 37 years later, he found an extraordinary thing: many of the villagers from 1966-1967 had died —particularly those who served alongside the Marines; some married and moved away from the village —and yet in spite of this, everyone living in the village in 2003 could recount stories about “their Marines.”

You see, the villagers passed down the stories of what happened in Binh Nghia to their children, then they told the stories to their children. Everyone knew what these Marines did, and as Mr. West walked through the village in 2003, one old farmer came to him and asked, “Tell me Dai U’y where is Sergeant Mac? Do you know Bill ... Marines number one, what happened to Monty? What happened to Frill (Phil)?” Not far away Mr. Bing found a marker resting between two palm trees, and on it a small inscription to the Marines who had built their well and shrine in 1967.

Herein lies the true pain of the Vietnam War. Young Americans went to Vietnam to fight a vicious and resourceful enemy. A few of these people ended up protecting a few thousand residents of a small village along the coast in Quang Ngai province. Most of the Marines cherished these simple people so much that they ended up dying for them. In return, the villagers ended up adopting these Marines; they remember their sacrifices even today. If only the American people had loved these Marines as much.

The Village is a worthwhile book, on many different levels.
Read more
10 people found this helpful
Helpful
Report abuse
See all reviews

John Richard
4.0 out of 5 stars Exceptional war story with updates
Reviewed in the United Kingdom on September 18, 2006
Verified Purchase
Very unusual Vietnam war story, having read many books about this conflict I have never before encountered a situation like this where a small squad of marines lived amongst villagers and fought alongside the indigenous fighters. Between them, they became a local elite, very choosy about whom else could join them. Great story, very enjoyable.
Read more
3 people found this helpful
Report abuse

Amazon Customer
5.0 out of 5 stars Going to read it again.
Reviewed in Australia on June 6, 2017
Verified Purchase
An incredible story. I couldn't put the book down. i ended up rereading it several times over the years. Winning the hearts and minds in such a hostile and dangerous place.
Read more
Report abuse

Arthur R Clinton
3.0 out of 5 stars Three Stars
Reviewed in Canada on June 19, 2015
Verified Purchase
Gives an inside view of the village war and winning hearts and minds.
Read more
Report abuse

Kris Theriault
4.0 out of 5 stars Four Stars
Reviewed in Canada on October 27, 2015
Verified Purchase
The book was as described.
Read more
Report abuse
See all reviews