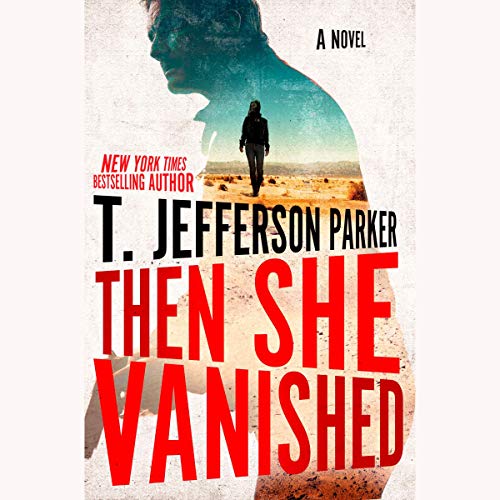 Then She Vanished: A Roland Ford Novel, Book 4

T. Jefferson Parker (Author), Will Damron (Narrator), Penguin Audio (Publisher) & 0 more
4.3 out of 5 stars 578 ratings
See all formats and editions
Sorry, there was a problem loading this page. Try again.

What if the client who's hired you can't be trusted...and the woman you're looking for doesn't want to be found? With Then She Vanished, three-time Edgar Award winner and New York Times best-selling author T. Jefferson Parker delivers a new and pulse-pounding thriller.

Private Investigator Roland Ford has taken a job for a fellow Marine and a rising politician, Dalton Strait. Strait is contending with unexplained bombings of government buildings in his district...but that is not why he hired Ford. Strait's wife, Natalie, has gone missing, leaving behind a cryptic plea for help. Strait has made many enemies during his time in politics - including some of his own family members - all of whom could be looking for revenge. But as Ford digs into the details of a troubled marriage, Natalie's disappearance becomes more and more complicated.

Meanwhile, the bombings in the city intensify, with a mysterious group known only as the Chaos Committee claiming responsibility. Ford soon learns that the seemingly random attacks may be connected to the case he's on - and suddenly, his hunt for a missing woman might decide the fate of an entire city.

4.3 out of 5 stars
4.3 out of 5
578 global ratings
How are ratings calculated?
To calculate the overall star rating and percentage breakdown by star, we don’t use a simple average. Instead, our system considers things like how recent a review is and if the reviewer bought the item on Amazon. It also analyzes reviews to verify trustworthiness.
Top reviews

Leon Trotsky
1.0 out of 5 stars Mr. Parker's "Titanic"!
Reviewed in the United States on December 7, 2020
Verified Purchase
Having read all of Parker's novels over the years I started to note the last few got sloppy and the plots got stretched beyond their editorial needs. This novel hits the jackpot: a drunk California politician from San Diego who hires our Private Investigator to find his missing wife. By the end of Act One-expository-who really cares? And this is the high point. The story is weighed down by silly characters and subplots. AVOID.
Read more
7 people found this helpful
Helpful
Report abuse

Richard B. SchwartzTop Contributor: Philosophy
TOP 500 REVIEWERVINE VOICE
5.0 out of 5 stars Silk.
Reviewed in the United States on August 22, 2020
Verified Purchase
T. Jefferson Parker's new Roland Ford novel is a worthy addition to the series. Here, Roland is hired by a local politician to find his wife. Bi-polar and something of a spendthrift, the wife has either walked away into the desert or been kidnapped. The politician is an ex-marine, like Roland, and Roland agrees to search for her. At the same time a terrorist group that calls itself the Chaos Committee is sending mail bombs to public officials and inciting the public to kill police officers and anyone else who is handy. The question is, is the disappearance of the woman, Natalie Strait, related to the actions of the terrorists?

Roland's investigation is a linear, straightforward one, not unlike those of the other Parker's Spenser, investigations in which the PI 'goes around and asks people questions.' This is not a thriller, not an action/adventure and not really a mystery, per se, though we are anxious to see the final results of Roland's investigation and have a number of our own questions answered.

The setting is north San Diego, in general the Fallbrook area, where Jeff Parker lives, and his representations of it are always spot-on. Roland's 'irregulars', the renters on his farm/ranch return and Roland himself finds some romantic action with one of his employer's relatives, a now-legal cannabis farmer/marketer who is falling afoul of one of the Mexican cartels.

My friend and fellow mystery writer, the late Frank McConnell, used to say that we read books like Chandler's for a single line, the line that encompasses all of the experience and pain and wisdom that constitute the story. Hence, we look for great one-liners as one of the hallmarks of the genre. Here I counted six. Here is one:

"Nothing is slower than time.

And how's this for description—

"A long silence as the invisible weights of blame and forgiveness shifted on their invisible pulleys" (p. 187).

Jeff Parker is a modern master who makes everything look easy. That is so very hard to do. THEN SHE VANISHED is as smooth as a mountain lake and sometimes just as deep.
Read more
3 people found this helpful
Helpful
Report abuse

William W. Miller
5.0 out of 5 stars Good read......
Reviewed in the United States on August 15, 2020
Verified Purchase
Have followed this character, PI Roland Ford, finder of lost souls from the beginning I find the writing compelling and characters interesting. Read this in two sittings. Gulf War descriptions sound legitimate. Will be back for more as soon as available.
Read more
4 people found this helpful
Helpful
Report abuse

Kindle Customer
5.0 out of 5 stars Great Read
Reviewed in the United States on August 22, 2020
Verified Purchase
Super Read with plenty of twists and turns and tons of excitement. Great characters and a hell of a plot. Ready for the next Roland Ford book.
Read more
4 people found this helpful
Helpful
Report abuse

Kindle Customer
5.0 out of 5 stars Another Character Driven Paen to LOST LOVE and Redemption
Reviewed in the United States on August 26, 2020
Verified Purchase
Viet Nam era Veterans had the heat, the damp and enemies hidden in plain sight. Iraq War Vets had heat, the dry and enemies in plain sight. Both wars scarred the survivors with guilt, doubts, suffering indifference from those who hate our Nation. The physical scars heal, in a way over time, the mental damage still lingers. This Author captures the present anguish of the wars and also for those who loved and lost; some, who luckily found a new love, never supplanting those lost, but adding to the emotions and strengths of the often silent suffering survivors. Read and enjoy a bitter/sweet tale, appropriate for our turbulent times.
Read more
One person found this helpful
Helpful
Report abuse

William M. Thompson
3.0 out of 5 stars Not as Good as I hoped
Reviewed in the United States on September 18, 2020
Verified Purchase
After reading a review in the NYT I was expecting a great read. Unfortunately this was not one. It was Ok. Not enough character development and nothing about what the victim was going through. The ending was inconsistent with the husbans's action throughout and the ending of the love interest was tepid
Read more
3 people found this helpful
Helpful
Report abuse

Janet Woessner
5.0 out of 5 stars Then She Vanished
Reviewed in the United States on August 16, 2020
Verified Purchase
Being a So. Cal native, I find my self glued to each page of Jeff’s books. In Vanished, I find myself familiar once again with the various locations and immersing myself into Roland Ford’s character. As for me Law Enforcement, look at tactics and investigative techniques, remembering my own Gold Cup .45. I want to be an Irregular and live at Los Robles. Great author, great read.
Read more
3 people found this helpful
Helpful
Report abuse

bigD
5.0 out of 5 stars Another good story from Mr. Parker
Reviewed in the United States on February 8, 2021
Verified Purchase
I recently read his novel, The Last Good Guy, and went on to this so I'm all caught up with his books at this point ... all of his characters have become familiar to me, all with their own personalities set against an excellent story line, and some twists along the way ... Hope others enjoy his books as much as I do!
Read more
Helpful
Report abuse
See all reviews
Back to top
Get to Know Us
Make Money with Us
Amazon Payment Products
Let Us Help You
EnglishChoose a language for shopping. United StatesChoose a country/region for shopping.
© 1996-2022, Amazon.com, Inc. or its affiliates