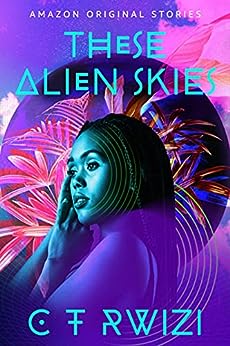 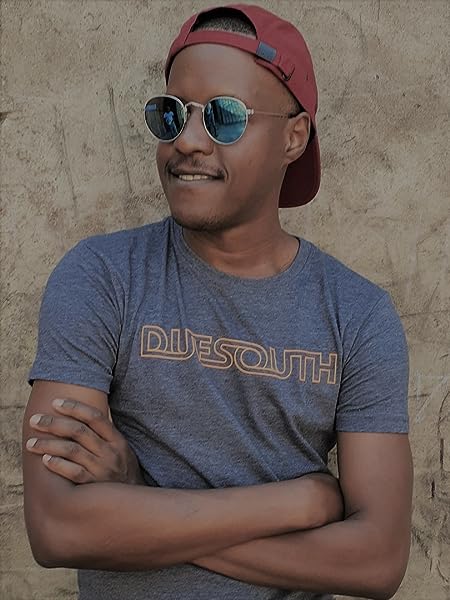 Accidents happen in the strange realms of the African Union system. One of them sends two humans to the far side of a star gate in a thrilling short story of hope, survival, and new dimensions.

Copilots Msizi and Tariro are testing a newly constructed wormhole jump that presumably leads to unsettled habitable worlds. Then an explosion sends them off course, far from where they started and with little chance of ever making it back. Now they’re stranded on their new home for the diaspora. It’s called Malcolm X-b. But they’re beginning to wonder how many light-years from civilization they really are.

C.T. Rwizi’s These Alien Skies is part of Black Stars, a multi-dimensional collection of speculative fiction from Black authors. Each story is a world much like our own. Read or listen to them in a single sitting.

“Science fiction invites audiences to imagine new and different worlds…Soon readers (and listeners) will be able to add some new voices and stories to this mix, thanks to an upcoming collection of short stories from Amazon Original Stories.” —SYFY Wire

“Part of what makes Black Stars so special is the fact that it is showcasing speculative science fiction from Black authors from around the world.” —SYFY Wire

“With a host of amazing authors, Black Stars is perfect for lovers of Afrofuturism, Caribbean science fiction, and African jujuism. As you read the stories, you’ll start to understand why there are so many different genres in the collection…Black Stars introduces people to so many different frameworks, showing the diversity of stories created when Black authors across the diaspora infuse their unique cultural perspectives into these narratives, creating an abundance of originality that lets readers imagine wildly different worlds, realities, and futures.” —Shondaland

C. T. Rwizi is the author of Scarlet Odyssey and Requiem Moon. He was born in Zimbabwe, grew up in Swaziland, finished high school in Costa Rica, got a BA in government at Dartmouth in the United States, and currently lives in South Africa with his family. C. T. is a self-professed lover of synthwave.

Debut author C. T. Rwizi was born in Zimbabwe, grew up in Swaziland, finished high school in Costa Rica, and got a BA in government at Dartmouth College in the United States. He currently lives in South Africa with his family, and enjoys playing video games, taking long runs, and spending way too much time lurking on Reddit. He is a self-professed lover of synthwave.

Misse Jones
VINE VOICE
4.0 out of 5 stars Very nice addition to the collection! 4.5/5
Reviewed in the United States on October 1, 2021
Verified Purchase
“History can be a burden sometimes.”

In These Alien Skies (Black Stars #4), author C.T. Rwizi pulls together a clear and concise science fiction fantasy that is engaging, moving, and well-written. I am not familiar with the author’s work beyond this novella, but with this introduction I’m sure I will be reading more of him.

Two co-pilots are doing testing when an explosion occurs that lands them stranded in their new uninhabited home in Malcolm X-b. They are forced to consider their odds for survival within this habitat and can only hope that what they see and what they know is all real and true.

Materia_Oscura
1.0 out of 5 stars Hard-going on the long road to SF exceptionalism
Reviewed in the United States on December 8, 2021
Verified Purchase
I was hopeful that this selection would at least be imaginative, but it was only marginally so; that is to say that my expectations were not egregious given our relatively late arrival to the genre. In my humble opinion, most speculative fiction written by people of Afrikan descent still reads like religious folklore of a sort with the sobriety of an old negro spiritual. There’s even a special new category for this type of work: Urban Fantasy. This newly invented genre blankets everything except hard science fiction (e.g., The Lost Tribes by C. Taylor-Butler).

The writing in These Alien Skies is sharp and the plot points actually connect but I can’t shake the feeling that certain parameters were imposed from without as a condition to publication. Maybe I’m overreaching, but all the markers that lead to such conclusions are present nevertheless: An intensive focus on the emerging presence of LGBT relationships in lieu of the ones that would normally lead to the creation of reproducing nuclear families; very few to no children, and definitely no black Afrikan babies; a strong association to actual poverty or a poverty-mindset; the lack of any credible hope for the future. The reader sounded as if she should have been attending a funeral service. After a certain point, I just decided to read the story for myself.

theresah
5.0 out of 5 stars alien contact, black diaspora
Reviewed in the United States on May 7, 2022
Verified Purchase
Picked up this title to share for black history month. This is the first complete story in the series of Black Stars. Its a remarkable story showing not love of African history. The Idea that humanity will find solutions to problems caused by colonialism in the future. The concept of colonization of worlds in the universe shows a micro focus of the colonial problem. A new world, has been targeted for colonization, the first ship through the wormhole has a remarkable transition in a mater of seconds, and opens a can of worms. The reader is place in the place of the first man across that horizon line. He is morning his closest friend, and you are faced not only with a new alien species, and old colonial people, and a new world but also how do we communicate with those we have lost. Beautiful story.
The voice of the audio edition add to the mystery of the story, making the reader question reality.
Read more
Helpful
Report abuse

Amirah Garces
4.0 out of 5 stars 4 stars
Reviewed in the United States on February 17, 2022
Verified Purchase
“When a person becomes so much of your identity, who are you without them?”

Wow this was so good. I was disappointed with the other books in this little series and I almost didn’t read this one but I’m glad I did. It was exactly what I wanted. A small glimpse of a different genre for me. Sci-fi fantasy, specifically by Black authors. The detail of the world/planet was amazing. I was able to see it (somewhat) and it didn’t confuse me, unlike the others in this series.

Possible spoiler:
Besides the talks about race,there was also a twist. Loving someone so much and loosing them. Making them your only source of happiness. Investing so much of yourself into them and then loosing them, unable to let go. That was beautiful
Read more
Helpful
Report abuse

Toni’s Books
5.0 out of 5 stars Very enjoyable story
Reviewed in the United States on September 20, 2021
Verified Purchase
I’m glad this showed up on my kindle. First of all I love this author and have read Scarlet Odyssey and Requiem Moon. Second, I wish it was longer. I would have love to know the outcome of the trip even though I’m assuming already. Will check out the remaining books in this various author series!!!
Read more
2 people found this helpful
Helpful
Report abuse

Toinette
5.0 out of 5 stars Good science fiction from a black perspective.
Reviewed in the United States on February 28, 2022
Verified Purchase
This is my favorite of the Black Stars collection. This is typical science fiction, space opera, with some fantasy elements set within the African diaspora- it actually speculates on the future of expanding the diaspora beyond earth. I don't have a lot of words to say about this short story without repeating the blurb or giving spoilers. This is just what I was looking for in a black sci-fi experience- it's good science fiction that just happens to be from a black perspective. Love it.

N.R.
5.0 out of 5 stars Happy I stumbled across this!
Reviewed in the United States on September 10, 2021
Verified Purchase
Ugh! I'm so stupidly happy to have found this book and series. Black sci-fi? Uhhhh, yes please! But anyway, this story is well written, with great detail and I love how it comes full circle. It's a great quick read. No spoilers here.
Read more
2 people found this helpful
Helpful
Report abuse

B. Prattis
5.0 out of 5 stars Wow. Just wow
Reviewed in the United States on April 24, 2022
Verified Purchase
The spiritual undertones in this amazing Afro futuristic piece. Perfection. Written in such a way that one can absolutely envision this reality in our not to distant future as our own govt is finally acknowledging having received interstellar objects into our atmosphere and contact with other worldly beings. This story is right on time, serving as a warning and also as a suggestion on how we can live harmoniously with the little bit if Earth that we aren't plundering. Bravo to the author for such a work!
Read more
Helpful
Report abuse
See all reviews

Redling
5.0 out of 5 stars One of the standouts of this collection
Reviewed in the United Kingdom on January 17, 2022
Verified Purchase
A wonderful, imaginative combination of sci-fi elements. The character arc isn't complicated, but is executed well, making the story feel complete and satisfying. I really liked the futuristic planets and cultures explored here; although we only see snippets of them, they nonetheless feel convincing. A thoroughly enjoyable read, and easily one of my favourites in this collection.
Read more
Report abuse
See all reviews