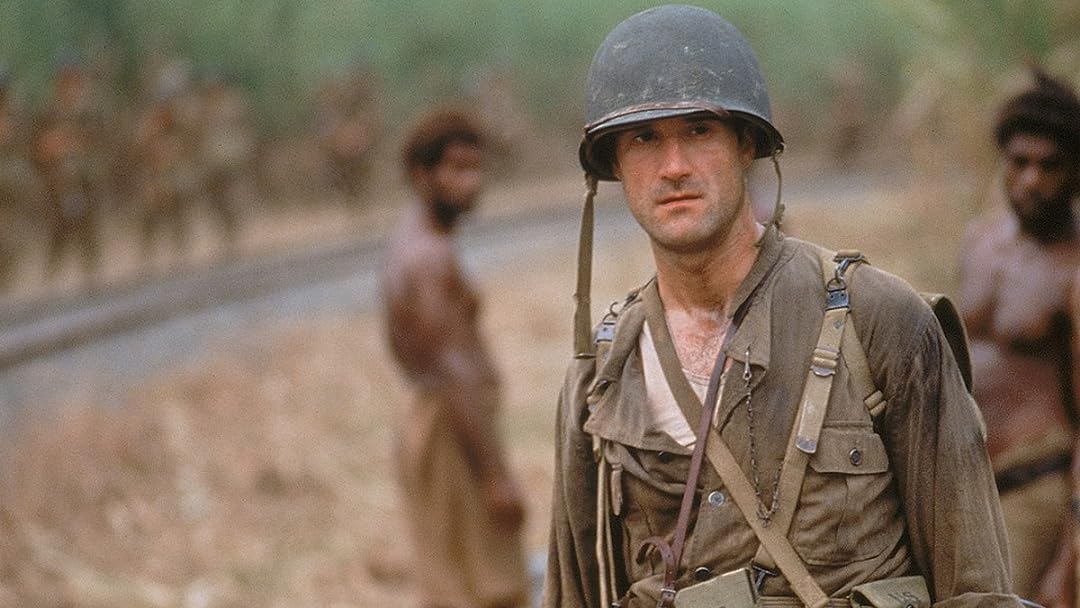 R. CusterReviewed in the United States on January 18, 2019
1.0 out of 5 stars
waste two hours of our lives
Verified purchase
This was at the top of a list of 30 war movies. So we had to see it. I appreciate some movies need to move around to create the art, Inception. Dang I walked out of that movie holding the railing. Some people have a negative opinion of the USA and our service men and women. I doubt most of them will like this movie. This is a pointless movie that disrespects our soldiers and jumps all over the place. The soldiers are all presented as cowards or promotion seekers. To writ, the third most popular search on this movie is "What is the meaning..." You could not find enough bad apples in a Division of soldiers to have these characters. The same list had the Piano player on it. Go watch that, or Hacksaw Ridge, Schindler List, The Guns of Naverone, anything else probably.
97 people found this helpful

Nicholos X. CaudilloReviewed in the United States on February 26, 2021
1.0 out of 5 stars
Banality with a lot of empty gloss
Verified purchase
Film cinematography is outstanding. That earns the Star.. A story could have been more riveting if not for the Vietnam movie tropes of Soldier poets and men going to war with homesickness and blatant fear of a conscript. 95% of the Guadalcanal campaign was fought with men who wanted revenge for Pearl Harbor. The Japanese and American troops fought with tenacity, gusto and rage. Trophy hunting was not only rampant it was expected on both sides. To put hollywood Vietnam antiwar tropes in this tale is a disservice to the combatants.
46 people found this helpful

AvenReviewed in the United States on January 23, 2017
5.0 out of 5 stars
A Cerebral Masterpiece
Verified purchase
Most war movies encapsulate run-of-the-mill plot lines and human trivialities, but The Thin Red Line departs from the bleak and overly commercialized blockbusters that most film-makers produce these days. The movie is less of a story about World War II and more of a Freudian analysis of conflict in general. In the movie, many soldiers struggle to face the bombs and explosions raining upon them. Some men spit with rage and throw temper tantrums while other men forget who they are. On the other hand, there are a few men who are loosely tethered - yet sensitive - to the events around them; they may be scared, confused, angry, or entirely indifferent to the noise around them, but they have an unshakable grasp of their surroundings. This small demographic is one of those psyches explored in the movie, but it is the most focal group.

The movie follows the intermittent musings of a calm and deliberate man aptly named Private Witt. As he traverses brush and jungle foliage, he vaguely relates prior experiences to the events he experiences on Guadalcanal. Other soldiers share similar reminiscent instances throughout the movie as the Americans push against the entrenched Japanese forces. Each soldier's recollection offers a meaningful examination of war and humanity. The memories and revelations do not add anything particularly truthful to the actual events at Guadalcanal or even anything universally truthful (depending on one's point of view, to be sure). However, the stories are incredibly insightful and engaging for a war movie. The acting is believable, captivating, and inspiring. The movie also features a long list of great actors, including, (to name a few), Sean Penn, Jim Caviezel, John Cusack, Adrien Brody, John Reilly, Nick Nolte, Miranda Otto, Woody Harrelson, John Travolta, and George Clooney.

There are other WWII / war related movies I enjoy, but The Thin Red Line is the most substantive and compelling war movie I've ever seen. If you want to watch something that can transport you between a battlefield and a calm ocean-front beach, this is the movie for you.

philip wernerReviewed in the United States on November 18, 2017
5.0 out of 5 stars
Film making at its best.
Verified purchase
I am a VN combat veteran and that colors my take on war films. I see them, but I tend not to like them.
This one is special. I love this movie's combination of poetic reverie and the extreme violence of WWII combat in the Pacific. Fabulous cast and brilliant directing. Not to be missed.
80 people found this helpful

A. MccaskillReviewed in the United States on January 2, 2019
1.0 out of 5 stars
A waste of time
Verified purchase
This movie tries to impart modern emotionalism, doubts and relativism on World War II soldiers. It fails. The battle scenes are like some of the bad Vietnam War movies of the 1970s. Using actors who are hostile to the military rarely creates accurate battle scenes or portrayals of soldiers. Don't waste your time on this movie!
52 people found this helpful

Allen SmallingReviewed in the United States on October 25, 2017
5.0 out of 5 stars
Long, but rewarding WWII epic set in South Pacific
Verified purchase
It's a World War II platoon movie, but unlike either the postwar "guts and glory" movie or the more recent "anti-war war movie," this one has the daring to head out on its own and succeed. Set on a Pacific island still in the hands of the Japanese, Terence Malick's feature presents both the act of war (seizing the island) and the moral by-products of war. A terrific cast including Jim Caviezel, Elias Koteras, John Travolta and George Clooney -- truly, stars popping up all the time. My favorite actor in this movie, though, is Nick Nolte as an embittered lifer, too young to have seen action in the prior world war and too old to make much of a difference in this one. THE THIN RED LINE takes patience, but it's worth it.
35 people found this helpful

Jeff NelsonReviewed in the United States on January 19, 2022
1.0 out of 5 stars
My Father actually fought this war, it wasn't like this at all
Verified purchase
This movie is a bunch of Hollywood writer "Philosopher poet" nonsense apparently trying to make a romanticist art project. Glossed over is the horror, the gruesome awful ripped to shreds horror all around them. Glossed over is the misery of knee deep mud, blood, guts disease and the jungle itself. The genuine heroes that fought on both sides often did so mostly for the guy next to them, whom like themselves might be dead in only minutes. Our enemies were tough, but so were our people. My father used to say when I would ask him "Dad, were you a hero?" He would say "Son, the real heroes are all dead I just did my job."

I saw my fathers USMC photo scrap book, his captured Japanese flags and listened to his very few ever tales of that war he would share with me as I was just a young kid. He fought on Iwo Jima landing under fire while the navy shelled the island and they lost so many men. That island has hot black sand and they were trapped on the beach a long time he was shot several times leaving scars but he didn't consider it bad enough to see a corpsman. "There were far worse men that needed it more"

He fought on other islands and even was trapped into some at sea battles with kamikazes on the troop ships and convoys. My brother fought in Viet Nam where his fire base was over run the day after he left for the states. The wars weighted heavy on them and sometimes they would talk about what they had to do, what they saw. Pretty traumatic and horrific things on a deeply personal level.

now I say this for a reason: You ever stood by a accident victim or a head on collision and started philosophizing about where evil comes from, whats the meaning of the universe? No, No one does. If you are like most people you just think "Those poor people! Thank God it wasn't me or my family." I know that is what I thought. Then you get back in you car and drive off.

That's why I think the movie does a huge disservice to the greatest generation that were on that island, whom ate their dog food like "C" rations in shell craters surrounded by body parts and rotting corpses without whining and then "Just got up and did their jobs knowing they might very well be next." Those people won because they knew they had to.

People have forgotten what real men are really like, they ARE NOT the weak shadow of what passes for that now. That's why I think this movie is only worth one star. It forgot what epic strength these teenage boys and young men had, their courage and strength of character, self sacrifice and tried to make it in the image of the modern left: Weak and pseudo philosophical. Watch "We were soldiers" that movie gets it. See the difference.
6 people found this helpful

Jason MahoneyReviewed in the United States on December 25, 2021
1.0 out of 5 stars
overall terrible, not worth your time
Verified purchase
I watched this movie because of the reputation it has and I am left wondering why people give this 4+ stars.
It fails on many levels, screen play, editing, historical accuracy, character development to name a few.
The screen play just rambles from scene to scene, with no flow or overall theme, Is it a buddy movie? coming to age in war movie? Apocalypse Now wanna be? Honor lost but regained movie? anti establishment movie? Anti war movie? Yes all of these for about 20 minutes the on to the next theme!
The producers must have been off their medication when this was edited. If they were going for showing how a mental patient sees the world A+ but otherwise F.
Historically it is totally off. If you need certain scenario to move the plot forward fine, but don’t take a well documented battle and completely rewrite it. Supposedly a company of US Army soldiers need to capture a ridge on Guadalcanal so an airfield can be built. Well the USMC landed first and captured the airfield the first day and had planes operating out of it quickly so huge historical accuracy fail, They also have Japanese soldiers surrendering including an officer(?) which simply did not happen this early in the war.
There are no likable characters or even characters you even hate, you just really have no attachment to any of them.
I could go on but there are so many other good movies out there I suggest you watch over this. Even Sand of Iwo Jima for all its gung ho flaws with John Wayne has better plot, historical accuracy, character development.
6 people found this helpful
See all reviews
Back to top
Get to Know Us
Make Money with Us
Amazon Payment Products
Let Us Help You
EnglishChoose a language for shopping. United StatesChoose a country/region for shopping.
© 1996-2022, Amazon.com, Inc. or its affiliates