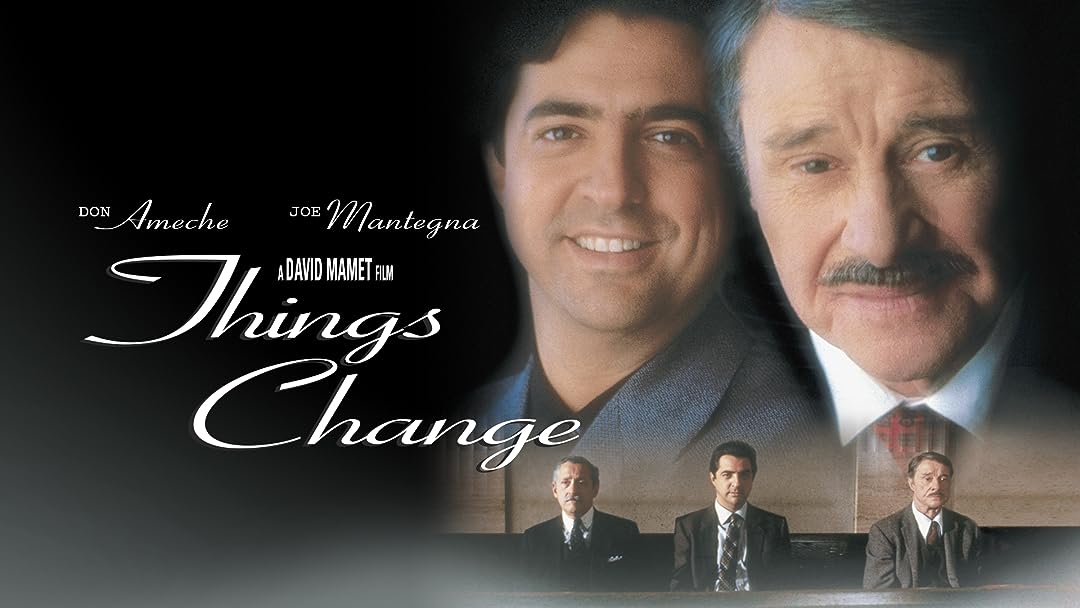 (224)
7.01 h 40 min1988PG
Jerry (Joe Mantegna), a low-level mobster, is tasked with keeping Gino (Don Ameche), an old shoeshiner, safe the weekend before he is set to confess to a murder he didn't commit. The misadventure begins when Gino is mistaken for a mob boss when Jerry takes him out for a final fling. Ameche and Mantegna shared Best Actor honors at the Venice Film Festival for their roles in this David Mamet romp.

Antony SteeleReviewed in the United States on February 3, 2017
4.0 out of 5 stars
Deeply Entertaining in a Storybook kind of way. Well Done!
Verified purchase
This was an enjoyable and entertaining movie. The performances by Mantagna, Amiche, and Prosky were all nicely done. The movie is almost 30 years old now, but I had never seen it nor heard of it before. Great supporting cast as well. I have seen some reviews comparing this to "Being There" with Peter Sellers, but this is different. Amiche's character never forgets who or what he is about, and certainly does not walk on water. The scenes at the Oak Street Beach in Chicago took me back to my childhood there. I gave this 4 stars, as it is not a "blockbuster" kind of tour de force, but it is well made, well acted, and I am glad I took the time to see this. Do not watch this if you are expecting a "shoot em up" kind of movie, but it is fun to watch and Amiche is classic. Great Film.
7 people found this helpful

Yiannis PReviewed in the United States on December 25, 2018
3.0 out of 5 stars
Things Didn't Change Enough
Verified purchase
An interesting story with its funny moments, but could have been executed better. Often Unnecessarily slow with time spent on unimportant details, and an ending that was anything but a satisfactory one. Anything short of fishing on a boat in Sicily was trading a cruel version of reality for the desired fantasy.
4 people found this helpful

Brian Lee HartReviewed in the United States on April 27, 2015
5.0 out of 5 stars
If you like Don Ameche, you will love this. I am glad I bought it.
Verified purchase
This story is a well acted flick about how a friendship can build, It is listed as a comedy, which is partially right, but it is also a heart felt tale about an older Italian shoeshine man, Gino, [Ameche], who is payed by the mob to confess for a murder which he did not commit. Another man, who is on probation by the mob [Mantegna], who is a misfit with the mob is given a chance to redeem himself, is to guard to him in a hotel room over the weekend for a Monday court trial..

They agreed to take a trip to Vegas, where he [Gino] is mistaken to be a Mafia Boss with his bodyguard. He is catapulted into the highest status of the mobsters. His bodyguard finds himself into a mess when he wants a low profile. Which doesn't happen. I do not want to get into the details of what happens, because it is a very interesting plot which has a surprise ending, which I know you will enjoy this movie. All with clean humor.

HakimReviewed in the United States on August 13, 2007
5.0 out of 5 stars
David Mamet's best!
Verified purchase
This is a sweet little film set in modern Mafia times in the US. Ameche [in what is arguably his best role ever] plays a poor shoemaker whose dream is to have a little fishing boat back in his village in Italy. When bumbling low-level wiseguy Joe Montagna offers him a sweet deal to falsely admit to a murder and do the time in exchange for the money to buy his boat, the plot is set.
But Montagna, sensing that something is wrong with the deal, sets out to give the old man one last fling, and so takes him [against his boss' express orders] to a Tahoe casino. While playing hooky, Montagna is recognised by an associate and must lie about his charge's identity, which sets the whole plot in motion. The pair wind up at a high-level Mafia conclave, where the old shoemaker's simple and guileless ways are taken for the wiles of an arch-strategist.
It's a poker game magnified to Machiavellian dimensions, and guess whose bluff is called. I won't spoil the endings [there are a couple of them], but suffice it to say that this classic film has a heart of gold, and is destined to be remembered as possibly the only comedy to be mentioned in the same breath as the great American opera, The Godfather.
4 people found this helpful

Melinna C.Reviewed in the United States on May 31, 2014
5.0 out of 5 stars
Things Change
Verified purchase
A gentle, quirky little film. Got me laughing, crying and sighing. Don Ameche and Joe Montegna are wonderful and believeable in this little tale of a mafia henchman (Montegna) who has to "sell" the idea to a shoe repairman the notion of confessing to a crime he did not commit. The idea is that, if he's willing to do this, he can take a trip back to Italy, or do whatever he wants, get whatever he wants, before he has to to to prison. Since he is old and has no family or savings, the Mob thinks it's a good idea, and Gino (the shoe repairman) played by Don Ameche agrees. But things don't happen as they planned, and the ensuing complications, mis-directions and overall chaos lead to a fascinating ride that will keep you glued to the screen. See it; you'll like it.
2 people found this helpful

EricReviewed in the United States on August 20, 2021
1.0 out of 5 stars
Should not be rated PG
Verified purchase
Has partial nudity - no need to put that in. Thought a movie with Don Amechi would be more wholesome. It is not.

Amazon CustomerReviewed in the United States on February 10, 2017
5.0 out of 5 stars
"Thngs Change" Gives New Meaning to 'Buddy Comedy." Most ENJOYABLE.
Verified purchase
A quasi-ethnic "Mob" comedy on a par with the excellent writing and actiing exhibited by Midnight Run. When I first saw this film about 10 years ago it stuck in my mind as a delightful comedy, starring a more elderly version of matinee idol Don Ameche as a shoeshine man wanted by the mob to be murdered in place of a Mafia bigwig. The shoshine man had s a final weekend, where he is "baby sat: by a young mafia wannnabe Joe Mantegna, whicht urns this into an intergenerational buddy comedy with lots of laughs and poignancy..
3 people found this helpful

Sheila R. SchultzReviewed in the United States on February 12, 2018
5.0 out of 5 stars
VERY ENTERTAINING AND THOUGHT PROVOKING. Much better than expected. outstanding performances by Don Ameche & Joe Montegna
Verified purchase
VERY ENTERTAINING AND THOUGHT PROVOKING. Loved this movie, much better than I expected, with stellar performances by Don Ameche and Joe Montegna. Great script by famous playwright whose name escapes me. Wonderful story, well told.
2 people found this helpful
See all reviews
Back to top
Get to Know Us
Make Money with Us
Amazon Payment Products
Let Us Help You
EnglishChoose a language for shopping. United StatesChoose a country/region for shopping.
© 1996-2022, Amazon.com, Inc. or its affiliates