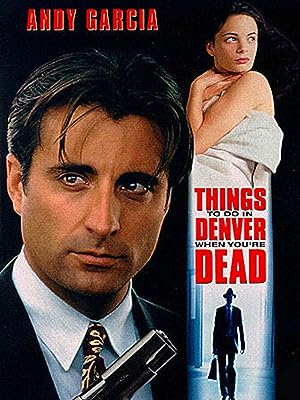 Things To Do In Denver When You're Dead

T. D. KozanReviewed in the United States on February 11, 2018
5.0 out of 5 stars
Tough call
Verified purchase
Cannot find a way to stop waffling on this one. Some days it's a two star film, more frequently a five-star job.

More than most, It's the kind of thing you like if you like that kind of thing. At a minimum, the pre-gentrification locations shot in Denver are good for a couple of stars and, despite the opinion of certain overcompensated "reviewers," one thing it isn't is a Pulp Fiction rip-off.

Yah, there are some outrageously twisted scenes but that's Film Noir for you. Much more than usual, if you're on the tipping point, I'd recommend *watching* Denver rather than taking a pass.

Chances are that you'll find something cool to do with Denver.

Erma P. SandersReviewed in the United States on January 17, 2020
5.0 out of 5 stars
Favorite stars in a great flick.
Verified purchase
I'm a little biased because I will pay to watch my favorite actor, William Forsythe, read the back of a cereal box. This film not only stars him; it stars the always fabulous Andy Garcia and Christopher Walken. Add in a good story and you've got this movie. Look forward to multiple viewings.
4 people found this helpful

Geoffrey SingerReviewed in the United States on January 5, 2017
5.0 out of 5 stars
Enjoy it. Drink boat-drinks
Verified purchase
It is one of the more enigmatic movies I have seen. Andy Garcia, in fact the whole gang of thugs, are the cream of the crop of this sort of thing, Each role is a unique one-of-a-kind character. It has a unique atmosphere of psychic pleasure and psychic danger. The title says a lot, but these characters are much more alive than most even though they have been pronounced dead by a crime boss that had once been their employer. See it. Enjoy it. Drink boat-drinks!
8 people found this helpful

TheathegreatReviewed in the United States on November 25, 2019
5.0 out of 5 stars
Collectors must have
Verified purchase
Give it a name... All star cast all star acting. Steve Buscemi too... A classic
2 people found this helpful

Amazon CustomerReviewed in the United States on October 26, 2021
5.0 out of 5 stars
Great Movie
Verified purchase
Growing up and working in the Denver area at the time the movie was made, it was great to recognize of few of my old haunts. I moved back in 2012 and boy did things change in the 14 years I was absent.

"tomhreece"Reviewed in the United States on April 13, 2002
3.0 out of 5 stars
turgid
Verified purchase
This movie is loaded with stuff---maybe too much.It runs close to two hours,has some excellent performances,some snappy but hard to follow dialog,some humor,some sadness,some brutality,and a lot of other somes. The sum of which could be too much.The first half of the movie is better than the last half. It gets a little heavy for a causual viewing.If you watch it be ready to a little depressed but if you watch the performances of a great cast and remember it's a movie you'll do okay. Garcia is good,but the smaller roles are the gems. Lloyd,Williams and Balk are sensational. Christopher Walken is beautiful in the Christopher Walken way. Forsythe tends to be underrated but is excellent.Bill Nunn and the charming Steve Buscemi are also excellent.Jack Warden's narration trys to help us understand.I do ,however,think that Gabrielle Anwar was miscast. Her acting is fine,but she just seems,well,young.The film has some nasty parts---don't let the kids in the room,but be sure to watch Christopher Lloyd.I didn't know he had it in him.Pay attention to this film and you'll have some emotions,about the film,maybe about lives you would rather not know about.
5 people found this helpful

Susanne SchuchmanReviewed in the United States on June 30, 2021
1.0 out of 5 stars
You need a international DVD player to watch this movie in the USA
Verified purchase
Great movie , I order the wrong reign ( 2) which won't play in the USA unless you have a international DVD player. I contacted the seller that was the answer - not a refund or replace but I need to buy a different DVD player.
See all reviews
Back to top
Get to Know Us
Make Money with Us
Amazon Payment Products
Let Us Help You
EnglishChoose a language for shopping. United StatesChoose a country/region for shopping.
© 1996-2021, Amazon.com, Inc. or its affiliates