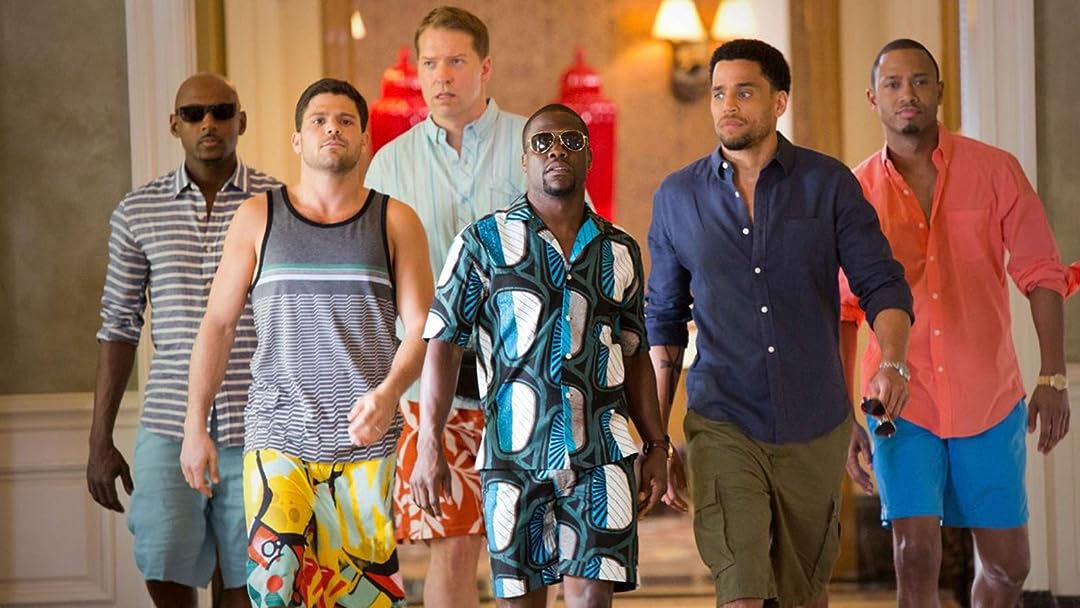 (8,003)
5.71 h 45 min2014X-RayUHDPG-13
It's off to Vegas for bachelor and bachelorette parties, and even more party-hearty craziness when the guys and girls get ready for a wedding.

joel wingReviewed in the United States on July 25, 2019
4.0 out of 5 stars
Another great romantic-comedy from same producer as Think Like A Man & About Last Night
Verified purchase
Think Like A Man Too was the third romantic-comedy film produced by Will Packer. The first film was about men and women figuring out their relationships. The second movie was taking it to the next level and deciding on marriage. It brought together all the same actors Meagan Good as Mya, Romany Malco as Zeke, Gabrielle Union as Kristen, Jerry Ferrara as Jeremy, Gary Owens as Bennett and introduced Wendi McLendon as Tish, Michael Ealy as Dominic, Taraji P. Henson as Lauren, Terrence J. as Michael, Regina Hall as Candace, Kevin Hart as Cedric, and Jenifer Lewis as Loretta.

The story focuses upon all the hijinks the characters get into while in Las Vegas and is way more about the comedy than the romance. There are some standout moments like when the men enter into a strip contest which leads to a fight and Candace dealing with Michael’s mother Loretta is always worth a laught. If you liked Think Like A Man or Packer’s other release About Last Night you’ll like this one as well.
C

JacyReviewed in the United States on May 26, 2015
5.0 out of 5 stars
Think Like A Man Too - Very Funny Too!
Verified purchase
Rarely does a sequel reach the quality of the initial movie, but Think Like A Man Too provided us with as many laughs as the first movie.

This time the entire cast goes to Vegas for Michael and Candace's wedding. Between the antics that the guys attempt to pull and the overpowering (and super controlling) behavior of Michael's Mom, Loretta (played to perfection by Jenifer Lewis), things go awry pretty quickly and it's pretty much a downhill slide for everyone from there! Oh, and ladies, that tall-drink-of-water, Dennis Haysbert, reprises his role as "Uncle Eddie," distracting Loretta (and me ;-)) to perfection.

The story also picks up with where all of the couples are at, which makes it more interesting. Needless to say, Kevin Hart is at the center of the laughs but the cast, (especially Zeke - of "40 Year Old Virgin" and Jeremy - of "Entourage") once again, enhance the laughs. Too few "romantic comedies" that will appeal to both women and men available these days but this movie and, it's predecessor, make the perfect 'date night' movie.

Be SURE to watch the original movie (Think Like A Man) first though as it is hilarious and will help you to appreciate this sequel even more.

ccallieReviewed in the United States on November 28, 2015
2.0 out of 5 stars
Too much Kevin Hart. Not enough love story.
Verified purchase
I love a good love story - especially one with some comedy and some tender moments. This movie had potential, but fell very short on hitting any of those aspects. There is some sprinkling of love stories for each couple throughout, but they don't develop then well enough for the viewer to really connect with the (very brief) tender moments at the end. The worst part of the movie is how over the top they made Kevin Hart's role. He was no only annoying to the other characters, but so annoying to the viewer that I had to resist turning the movie off several times. It really took away from the movie and minimized the effectiveness of the other characters. I wonder why the writer and director didn't leverage all of the characters' strengths in this movie. Very disappointing.
I should mention that I did watch the first in this sequence, and while not a favorite for me, it did a much better job developing the love story and finding a balance between Kevin Hart's character and the other actors and actresses.
7 people found this helpful

Jacqueline LewisReviewed in the United States on November 20, 2020
5.0 out of 5 stars
Very Funny Movie
Verified purchase
I purchased this movie because I get tired of waiting for it to come on TV. I love this movie because all characters in this movie are very funny and they all fit right together. All actors and actresses were so perfect and no one could have done it better. I really love the mugshot and prison scenes. I saw this movie when it opened at the theaters and I couldn't stop laughing, I even had to leave out because I almost made myself sick from laughing and could not breathe. It is definitely a must see movie!

Robyn B. McgormReviewed in the United States on February 6, 2015
5.0 out of 5 stars
Comedy worth watching.
Verified purchase
Fabulous in all aspects of this show, story great and the actors did another marvellous job of hitting the funny button to carry on from the first one. This time the gals have the floor and so does mama, the laughter is there and not overdone, worth a look see and forming your own opinion. If you liked the first one this will appeal to you just as much. Now if you didn't like the first than don't waste your time and money. I rated this an A grade plus for the ideas and the funny sides of both marriage and single that can just happen, Now I have told you very little about this show but why should it be spoiled by telling it all. Now it's your turn to get a move on, pick up this movie collect the popcorn and drinks for a fabulous night in with a fantastic show that entertainment can only provide in your own living room. A wonderful family show for teenagers not to loud or too far fetched. Enjoy!
One person found this helpful

Kindle CustomerReviewed in the United States on June 23, 2016
5.0 out of 5 stars
To say I loved it is an understatement
Verified purchase
To say I loved it is an understatement; although I had already gone to the movies to see this movie I STILL rented it again here on Amazon ...and STILL cracked up laughing like I have never seen the movie before! I love EVERY ONE of these actors/actresses in this movie and I absolutely love the fact that there is undercurrent jabs at each other's race without hostility; they actually laugh WITH each other. Most of the scenes that are supposed to be funny are truly hilarious and the scenes that are supposed to be touching hit their marks. And yeah, I'll probably rent it again or maybe next time I'll just buy it watch it when and as much as I want to! ENJOY!!!!
2 people found this helpful

ShopperMReviewed in the United States on July 18, 2021
4.0 out of 5 stars
Fun movie
Verified purchase
Have had this on my wish list for a while, but only just recently got it. Cute light-hearted, mostly clean romantic comedy. The first one is good to and I've had that one for a while.

Barbara KimberReviewed in the United States on October 27, 2014
5.0 out of 5 stars
Funny! Funny
Verified purchase
Funny! Funny! Funny! I think I laughed through this entire film, especially the fight scene at the strip club. Kevin Hart is hilarious! This man can turn any movie into a box office hit! The entire cast did an excellent job keeping the audience interested, entertained and excited! The chemistry between the men and women was so believable. A shout out to Wendy Williams! The audience didn't see her face much, but she portrayed the perfect hateful and bossy ex! This is a film you will watch over and over again. Bravo! I would love to see PART THREE!
One person found this helpful
See all reviews
Back to top
Get to Know Us
Make Money with Us
Amazon Payment Products
Let Us Help You
EnglishChoose a language for shopping. United StatesChoose a country/region for shopping.
© 1996-2022, Amazon.com, Inc. or its affiliates