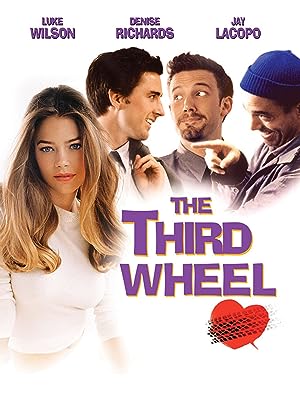 Big MommaReviewed in the United States on December 9, 2020
5.0 out of 5 stars
Who knew?
Verified purchase
I watched this movie because I like Ben Affleck's acting - and what a pleasant surprise that the movie is so good! Luke Wilson, the quiet Wilson brother (to my mind) is the star and if that means he outshines Ben Affleck here, well, stand back!

I want to say this is a rom-com. It's not. I want to say it's a comedy. It is, but not the laugh-out-loud kind. Somewhere between comedy and artful drama is where it lies. Even to the end, the story had me guessing.

Who was the architect of impressions? The office guy with the crush on the beautiful co-worker? Or the man they met in what seemed to be a random accident on their first date? The sweet looking Denise Richards, who can twist a guy's wrist in ten seconds and hold her own in a dark dangerous parking lot? Or the handsome Luke Wilson who can't seem to plan the next move of the evening without having it bungled and then compounding that bungle?

Luke Wilson. He is eye candy of the highest order. The only flaw in this film, other than a somewhat slow plodding beginning to the action, is making Wilson the shy guy when anyone that handsome would command a room - all eyes on him. He's a leading man who seems to never have used his good looks to build a career, talent aside. He has the talent. It's almost a great distraction that he's so damned sexy!

This is really a gem of a movie. Quiet but terrific, with plot and dialogue and acting better than most of what you see in low-budget films today. This had to be low-budget, but there are stars galore. Aside from Affleck, there is Melissa McCarthy, Lauren Graham in a cameo, Matt Damon, Jeff Garlin, and Diana Maria Riva. Most of the movie takes place on a date, in a car, or on the street. Simple. Effective. Good.

a Midwest reviewerReviewed in the United States on September 22, 2004
5.0 out of 5 stars
have you ever tried to plan the perfect date?
Verified purchase
I rented this movie and loved it so much I bought a used copy. If you have ever tried to plan the perfect date with that special someone who you really really want to get to know better, give this film a try. You've got to laugh at Stanley and Diana if you've ever been in a similar situation. This movie lets you laugh at yourself and that's always a good thing.

Stanley is so stiff and nervous about asking Diana out (a co-worker in his office) it's a wonder she agrees to go out with him at all. He rehearses with a buddy how he will ask her out - but you can't plan a conversation when the other person isn't following a script. Still Stanley doesn't give up even when the conversation gets off to a rocky start and Diana agrees to go out with him anyway. So Stanley plans the perfect date with the woman of his dreams who he's admired from afar for over a year.

On their date Stanely is as stiff and nervous as ever and Diana can tell things are going to be awkward and uncomfortable. To make matters worse they run into this annoying homeless guy named Phil who tags along with them at every step, wreaking havoc with Stanley's carefully laid plans. Will their evening be ruined? Or will Stanley and Diana roll with the punches and turn the unexpected into an opportunity? Does your dream date really want perfect? You'll have to watch this movie to find out.
8 people found this helpful

Linda From IndianaReviewed in the United States on May 16, 2013
5.0 out of 5 stars
Love this movie!!-- a family favorite!
Verified purchase
Accidentally ran across this movie on our Dish Network TV once and loved it. It is a romance, but was able to talk my husband into watching it and he laughed and smiled through the whole thing. Then our 20-ish daughter & sons watched it and they also really liked it. They have begun quoting certain parts of the movie. There are so many funny and "relate-able" parts for anyone who has dated or wanted to date someone! We then showed it to a group of college girls. It was a big hit!!! I don't know why this movie is so unknown because it is so good. It is definitely one of our favorites!! (And it doesn't contain a lot of "foul" talk or situations -- tho we did choose to skip the 1st scene when we showed it to the group of Christian college girls.) Everyone in my family LOVES this movie -- and that isn't an easy feat.
2 people found this helpful

Chelle A. T. JohnsonReviewed in the United States on March 19, 2022
5.0 out of 5 stars
Great movie for date night!
Verified purchase
Comically unfortunate events on a man's dream date occur which will make you chuckle for weeks after.
Plus a nice little twist in the plot.

Benjamin AriasReviewed in the United States on May 6, 2009
4.0 out of 5 stars
Ever had a real bad first date?
Verified purchase
Luke Wilson is an office nobody who falls for the new office girl Denise Richards. After months of doubt, Luke asks the dreamgirl out with the help of his best buddy Ben Affleck. His date is a series of comical misadventures stemming from a car accident involving a homelss pedestrian whose injury distracts & guides the evening. A great, funny date movie with a surprise ending to make you laugh out loud.
4 people found this helpful

Amazon CustomerReviewed in the United States on June 23, 2019
4.0 out of 5 stars
Classic
Verified purchase
Classic
One person found this helpful

JOHN KReviewed in the United States on June 23, 2018
3.0 out of 5 stars
Three Stars
Verified purchase
good movie
See all reviews
Back to top
Get to Know Us
Make Money with Us
Amazon Payment Products
Let Us Help You
EnglishChoose a language for shopping. United StatesChoose a country/region for shopping.
© 1996-2022, Amazon.com, Inc. or its affiliates