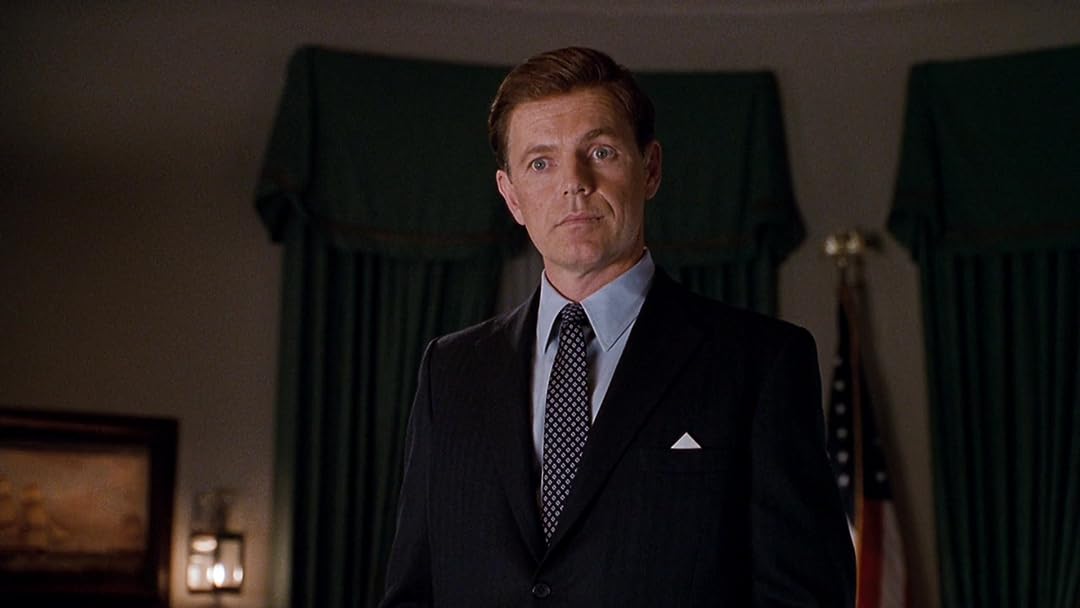 (2,869)
7.32 h 25 min2000PG-13
Kevin Costner stars in this inside look at how the Kennedy Administration responded to the discovery of offensive Soviet weapons in Cuba.

NateReviewed in the United States on May 24, 2018
5.0 out of 5 stars
Never seen it done better!
Verified purchase
Incredibly compelling movie. I was utterly glued to the screen, and didn't have any particular interest in this piece of history beforehand. The writers absolutely killed it. I lost count of the number of times I rewinded 20 seconds just to enjoy hearing the dialogue again. Not for any of my own politics either - but to feel the impact again. And the stakes...the writers put ME under that stress. I was shot right into the mental space of the White House in 1962, and stayed there for two and a half hours...seriously. It was very simple to follow - but wasn't dumbed down either. It takes special talent to carefully pick out, then write, specific plot moments and conversation bits to keep my eyes locked on a movie like that. The actors (there were many "leads" - it wasn't really about one person) all did a fantastic job. Except for maybe the accents (I grew up near Boston)....but man, that took away nothing from the movie for me.
27 people found this helpful

Martha Ann KennedyReviewed in the United States on August 17, 2019
3.0 out of 5 stars
Not Exactly History
Verified purchase
This film creates heroes and villains out of people who were sincerely trying to figure out an extremely difficult situation with many unknowns. I am not sure JFK and Bobby were saints and I'm not sure Lemay and Powers were villains. There were some important points made here, but I think, essentially, it's a propaganda film. However, the message behind this propaganda was sung by Sting in "I wonder if the Russians love their children too." It's not rocket science (ha ha) to understand that NO one wanted a nuclear armageddon. No one could ever want that. THAT is the deciding piece in this puzzle. I'm old enough to remember the Cuban Missile Crisis, though I was just a little girl. My dad worked at SAC as a war-gamer and was deep underground for the most critical days of this event. While he couldn't ever really tell me what happened, I don't think this film did, either.
11 people found this helpful

quickfarmlaneReviewed in the United States on March 21, 2021
5.0 out of 5 stars
Great Movie!!
Verified purchase
This is an outstanding movie for those who are not old enough to remember when we, as a nation, experienced truly tough times. Not the problems that are thought to be happening now, but real issues that threatened our very existence. This movie shows just how close, and it was closer than this flick lets on, we were to all out nuclear war. (there were depth charges dropped and a Soviet sub commander had to be talked out of launching a nuked torpedo at a U.S. warship. His junior officers stopped him, thank God). One more bad decision either way and it would have been over and most, if not all of us would not be reading this today!! A fairly accurate assessment of the "Thirteen Days" that nearly changed our world forever!!
5 people found this helpful

Jackbooted thugReviewed in the United States on October 29, 2017
4.0 out of 5 stars
Not a bad historical drama
Verified purchase
Overall, "Thirteen Days" is an excellent historical drama. A few minor points prevented me from giving this movie 5 stars.
It's just a tad longer than it needs to be. The director did an excellent job of conveying a LOT of historical fact without turning it into a documentary but there were a few places where a little bit of editing would have helped. There were also a couple of scenes where Hollywood got a little too thick in the interest of drama. I get the need to keep it exciting but the director took a little more liberty than needed.
Outside of those minor issues, this is a great Cold War flick about an event that few Americans truly understand.

When an actor is portraying historical figures there are two ways to go: All in, with every detail as close to the person you're attempting to portray displayed for the audience OR The proxy approach where the actor shows you the character he is playing but it's accepted that he's just a proxy for the historical figure. With the "All in" method the actor either hits the mark perfectly or the method fails miserably. In "Thirteen Days" they wisely went with the Proxy method. The audience always knows who the character is (JFK, Bobby Kennedy, Curtis Lemay, etc.) but the actor doesn't have to be a perfect stand in for the character. The actors in Thirteen Days did a pretty good job of this.
The use of Black & White in some scenes was brilliant and really helps pull the viewer into the right time. Some of the special effects look a bit too contrived but overall, they pull it off.
For the most part, the director did an excellent job of inserting the conflicts involved in the ever changing decision making process into the storyline. Overall, this isn't a bad historical drama. It might even be a good vehicle to spark an interest in the history of the Cold War in a young student.

There are so many real world events like this one that make excellent storylines. (Thirteen Days, Apollo 13, Zero Dark Thirty, Etc.). I wish Hollywood would step up to the plate and make these movies instead of Fast & Furious 47.

Delta D.Reviewed in the United States on January 8, 2019
3.0 out of 5 stars
Far too much Kevin Costner
Verified purchase
Docudramas are bound to adapt the facts for cinematic reasons. The better known the history is, the more sensitive this adaptation becomes. My objection to this one is not so much that it is historically inaccurate, but more that it's simply not credible. Kevin Costner is portrayed as saving the world, with his wisdom, calmness, insight and all-round good guy qualities. Not only is it well documented that O'Donnell, the character he portrays, had little input into the Cuban Missile crisis, but the portrayal defies all belief because the audience is asked to believe that his qualities are just out of all proportion to those of the other protagonists. Three stars, rather than two, because it's quite a clever amalgam of wordiness with the different options being discussed eloquently and visual spectacle with dramatic footage of warplanes and warships.
6 people found this helpful

D McKReviewed in the United States on March 15, 2021
5.0 out of 5 stars
I liked this film
Verified purchase
Pretty nuanced for a a film that didn't seem to get that much attn when released. Gives an intimate view of the Kennedys. I hope it is accurate, as it is a just a film and depends a lot on the filmwriter's view and the director's. The Kennedys seemed like good guys, and they sure got us out of the Cuban missile jam. I'm basically a conservative, but I respect them a lot. And their demises are shameful and shocking. Watch "Parkland" with Billy Bob Thornton. It's along the same track.
3 people found this helpful

scootermomReviewed in the United States on October 26, 2020
5.0 out of 5 stars
Best explanation of events that took place during the Cuban missile crisis
Verified purchase
I was born years after the Cuban missile crisis and never really had a good understanding of what happened and why. I just knew it had really frightened my mom just like the rest of the country. I watched this movie because I wanted to know the details of what happened. I'd tried to watch an old documentary that was made prior to this movie, but it was too boring to sit through. This movie was absolutely more interesting and reflected the intensity of the entire situation. I'd recommend it to anyone who, like me, isn't a huge fan of historical documentaries but want to learn about past events that affected our country.
2 people found this helpful

KReviewed in the United States on April 2, 2018
5.0 out of 5 stars
Great flick, and good historical context.
Verified purchase
Great movie for my government class. JFK and Bobby are portrayed great and the story and outcome is wonderful but everytime Kevin Costner spoke, with that super New England accent, half the class visibly cringed, like a jury looking at pictures of the murder victim. No offense Kevin, I love your work, but the accent was a bit harsh. Not an easy accent for sure, or um eh, fo shuwa
5 people found this helpful
See all reviews
Back to top
Get to Know Us
Make Money with Us
Amazon Payment Products
Let Us Help You
EnglishChoose a language for shopping. United StatesChoose a country/region for shopping.
© 1996-2021, Amazon.com, Inc. or its affiliates