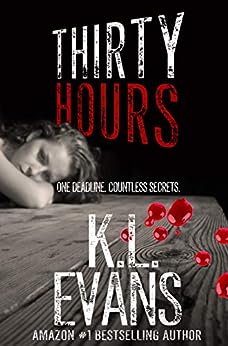 AC Gardner
5.0 out of 5 stars An emotional roller coaster
Reviewed in the United States on February 22, 2020
Verified Purchase
Where to start? I was angry, confused, happy and haunted throughout this book. The emotions were so absolutely raw and authentic. K. L. Evans will take you on a roller coaster ride that will leave you in pieces. I did not know what to expect from one chapter to the next. It took me almost to the end of the story before I realized what was going on.
I actually began this book on audio but once I got to the last quarter of the book I needed to pick up the written version, so I could hear/experience it in my own head. I was touched to the core by this story. It is NOT for the faint of heart. There are some very dark moments that will pull at you and are hard to forget. I am emotional writing this review even though it has been several months since I finished this book. It will move you in ways you won’t expect. Get ready for the ride.

Wow, this book takes you for a ride, first it grabs your attention, then it grabs your heart and it holds both hostage right to the end. K.L. Evans is a gifted author, she created interesting storylines that are easy to relate to. The characters are complex and are well developed. I adored the two leads, each complicated in their own way but they saw each other for who they were. Seth McCollum, a columnist chasing his next story for his “Humans of Dallas” column in the city paper. His interest is peaked by a girl he first saw bathing in fountain, they caught each others eyes before she was taken away by the police. When he runs into her again he decides she will be his next story. But she does not make it easy for him, he has to work for every bit of info, including her name. He is drawn to her and she becomes his obsession, he uncovers her secrets as much as she pries some out of him. The two grow close and the more he learns about her the more he realizes she needs saving, but can he, can you save someone who does not want to be saved. This books takes you on an emotional rollercoaster, it is eye opening and gut-wrenching at times. It covers sensitive topics and is the author does a great job handling and presenting them and keeping it real. K.L. Evans, thank you for this great story and the emotional rollercoaster ride.

I listened to the Audible edition, Rick Paradis is a great narrator and voice artist. This story is told in a unique fashion and he did a great portraying Seth and humanizing the characters and bringing them to life. He is an entertaining storyteller and a pleasure to listen to. Thank you for this great listen🎧
Read more
Helpful
Report abuse
See all reviews
Back to top
Get to Know Us
Make Money with Us
Amazon Payment Products
Let Us Help You
EnglishChoose a language for shopping. United StatesChoose a country/region for shopping.
© 1996-2021, Amazon.com, Inc. or its affiliates