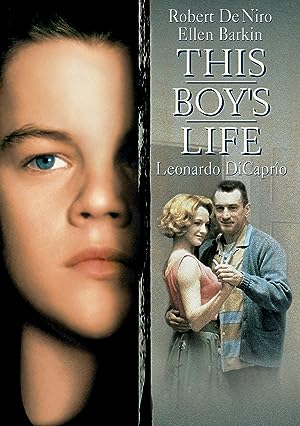 (1,873)
7.31 h 54 min1993R
Set in 1950s, this moving drama is a story of a young boy and his divorced mother. When his mother marries, the boy must struggle to endure a hostile relationship with his stepfather.

ZoeReviewed in the United States on March 28, 2020
4.0 out of 5 stars
Most definitely Trigger Warning for people who were abused as children!
Verified purchase
This story is about abuse that is hard to describe to others. It's easier to understand black eyes and broken arms. Everyone gets that. It is much more difficult to describe all these stupid little things that scar you for life - he forcefully put my face to a mustard jar and belittled me. Sounds weird right? I read the book also. It was flashback city for me. The only part I didn't like was the end. To me - not realistic to me at all though it is a truth told by the author so maybe that was true for him or he wanted to stop in a nice place. Who knows
4 people found this helpful

Comparison Shopping ConsumerReviewed in the United States on April 20, 2013
4.0 out of 5 stars
Great period piece- true story- great acting
Verified purchase
If I had just one reason to tell you to rent this, it would be to watch this for the sheer joy of seeing Leonardo DiCaprio in his younger years, showing off his acting chops.

That being said, it is also fascinating to watch this because Deniro plays one hell of a miserable warped bastard with a bad temper. It seems his goal in life is to make everyone as miserable as he is.

His character enjoys being a macho man, even if deep down inside, he is a hardly a man at all.

While he enjoys making others miserable, his main focus is DiCaprio's character.

This is based on a memoir and after viewing the movie I could not believe the author lived through this kind of life.
The movie is a tribute to the resilience of the human spirit.

The fact that it is a period piece( the movie starts in the 50's) is also a pleasure to watch, along with the songs of the era being played in the film's soundtrack.

After the movie I had to go online and read up on the author of this memoir.

You may find yourself just as interested to see what becomes of a boy that loves his mother so dearly, that he always agrees to go along with her wishes just to make her happy.

Wishes that he often knows are going to end up being nothing but heartache- for both of them.

The mother is played by Ellen Barkin, who fits very well into the role of a lovely and attractive single Mom of the 50's.

One who has resigned herself to another bad decision she has made.

She can do far better than Deniro- but she feels stuck and since the truth is that she *is* stuck, so is Dicaprio.

This is the first movie I have seen of DiCaprio as a youngster, before he hit the 'Titanic' wave of fame.

Deniro has played bad guys over the course of his movie career but nothing quite like this.

I would consider it a character study between DiCaprio and Deniro because their characters are complete opposites and yet they are a constant presence to one another, which makes what Dicaprio has to endure unavoidable.

This is a true human interest story - a film that shows Dicaprio had great acting ability in him, even at a young age. It has Deniro & Barkin together and a superb glance back into the 1950's era.

These are just a few good reasons to consider viewing this movie.

S. MasseyReviewed in the United States on November 8, 2020
5.0 out of 5 stars
I can relate...
Verified purchase
I saw this movie not long after it came out and it gave me nightmares and chills. I felt as-if I were watching a movie about my life. That said, I just rented it again to remind myself of what my childhood was like. Perhaps a form of torture, but now that I'm older, I'm able to appreciate the performances more and not feel so much emotion. I'm grateful for art when it mimics my life because I form an attachment to it and it goes with me everywhere. A hard hitting film and one that deserves its place in history.
2 people found this helpful

villainsruleReviewed in the United States on January 18, 2021
1.0 out of 5 stars
Waste of money
Verified purchase
Pretty dumb movie, not sure why anyone chose to make this movie. Pretty boring, not much happens besides cursing and talking about “hard d**ks”. Wish there had been more physical abuse/violence and torture. Not sure why people think this is such a good movie. I grew up around domestic violence, this movie ain’t got nothing. I regret I paid $3 to watch this.
One person found this helpful

Released in April 1993, a month after "What's Eating Gilbert Grape," This Boy's Life portrays a very young Leonardo DiCaprio as the young Tobias Wolff living with a sadistic stepfather (played by Robert DiNiro) in the backwash of Washington in the late 1950s. The scene with the mustard jar is chilling and every time I empty a jar of anything, I have flashbacks to this movie.
11 people found this helpful

bakerReviewed in the United States on February 29, 2016
5.0 out of 5 stars
Wanna walk home with me and Pepper?
Verified purchase
I first saw this way back when it was on a pay channel. I recorded it on tape, and took it over to a friends where we used to get drunk and laugh until tears. I think it was DiCaprio's first lead, and I must say he did a great job portraying "Jack". The story is loosely based on a true story of a writer who's teen years were a little rough because his mother (Ellen Barkin) never could get the right guy. She meets and marries Dwight (De Niro) a drunk mechanic who lives in the middle of nowhere Concrete, WA. Dwight seems to resent Jack, always chastising him, and picking on him. There's fights, and Jack makes some wild friends. His one really good friend is a " homo" named Arthur Gayle. Many, many funny parts including Boy Scouts, Jack hogging chocolate cherries, and Dwight's saxophone playing.
5 people found this helpful

jenny butlerReviewed in the United States on June 10, 2016
5.0 out of 5 stars
True stories are best!
Verified purchase
The kind of film from a story/memoir that restores trust in the human spirit not only surviving but overcoming. The main character, Tobias Wolfe, had every reason to grow up and be a loser: divorced parents, mom picked abusive men, no close relationship w/father, moved around, blocked from developing interests. His hope sprang from motivation for better, more, perseverance, and determination. Leonardo DeCaprio's performance is breath taking. Is there a greater power or inspiration than truth?
3 people found this helpful

Ann SherryReviewed in the United States on August 19, 2013
5.0 out of 5 stars
DeCaprio and DeNiro- Who Could Ask for Anything More?
Verified purchase
A teenaged Leonardo DeCaprio plays the son of a beautiful single mother in the late 1950's. She starts dating "Dwight" (Robert DeNiro), who seems like a nice guy who wants to marry her. She accepts, and both mother and son move into his house, that has three of his kids and is in a rotten little town that has nothing in it to do. After they're married, Dwight's mask comes off and he's actually an SOB. He likes nothing better than to boss his family around, getting physical and handing out punishments, with an air about him of being a good husband and father. The wife is turned against him on their wedding night. DeCaprio is picked on constantly. He is a high-spirited teenager, who can sing all the songs on the radio, do imitations, and is a likeable kid. Knowing his only chance for a reasonable life is to get into a good college, he concentrates on the challenge with everything seeming to be blocking his way. Both DeCaprio and DeNiro are superb in this well-written, re-watchable movie.
6 people found this helpful
See all reviews
Back to top
Get to Know Us
Make Money with Us
Amazon Payment Products
Let Us Help You
EnglishChoose a language for shopping. United StatesChoose a country/region for shopping.
© 1996-2022, Amazon.com, Inc. or its affiliates