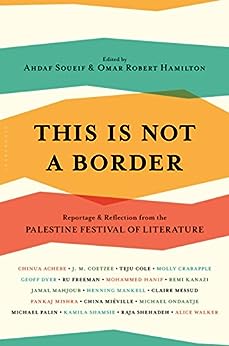 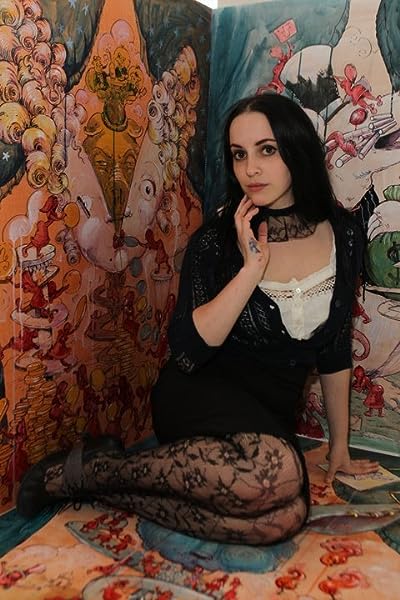 This Is Not a Border: Reportage & Reflection from the Palestine Festival of Literature Kindle Edition

The Palestine Festival of Literature was established in 2008 by authors Ahdaf Soueif, Brigid Keenan, Victoria Brittain and Omar Robert Hamilton. Bringing writers to Palestine from all corners of the globe, it aimed to break the cultural siege imposed by the Israeli military occupation, to strengthen artistic links with the rest of the world, and to reaffirm, in the words of Edward Said, "the power of culture over the culture of power."

Celebrating the tenth anniversary of PalFest, This Is Not a Border is a collection of essays, poems, and sketches from some of the world's most distinguished artists, responding to their experiences at this unique festival. Both heartbreaking and hopeful, their gathered work is a testament to the power of literature to promote solidarity and hope in the most desperate of situations.

"The writers express the belief that words will be the things with feathers that will eventually bring attention--and peace . . . A chorus of lyrical voices singing hopefully about a most contentious, divisive, and violent situation." - Kirkus Reviews

"In This Is Not a Border: Reportage & Reflections from the Palestine Festival of Literature, an impressive, global team of writers reflect on their experiences traveling to the Palestinian Occupied Territories . . . fascinating, intimate and brutally candid . . . This Is Not a Border transcends politics to reveal the common humanity of our world, to uncover optimism and hope in the most hopeless of places. Ultimately, the collection is a testament to the enduring power of art to unite people." - Shelf Awareness

"A stirring collection . . . This eclectic batch of reports and reflections challenges us to enact the spiritual practice of connections as we explore the links between imperialism, occupation, justice, art, and freedom . . . These essays and poems open many emotional doors, drawing us closer to these ravaged survivors who cling to hope even though it is in short supply." - Spirituality & Practice

“Every literary act, whether it is a great epic poem or an honest piece of journalism or a simple nonsense tale for children is a blow against the forces of stupidity and ignorance and darkness . . . The Palestine Festival of Literature exists to do just that--and I salute it for its work. Not only this year but for as long as it is necessary.” - Philip Pullman

“A literary festival as well as a journey . . . it has made me quite poignantly aware of what the occupation means to people and of their determination to speak up for the writers and musicians who feel that the occupation has taken their voice away . . . An eye-opening experience.” - Michael Palin

“PalFest has quickly established itself a much-loved international festival. As a charity, it is unique in bringing creativity, beauty, partnership, and tolerance into all our lives, and I can't think of many cultural institutions more deserving of our full support.” - Andrew O'Hagan

“It's a festival like no other. It is so much more than a festival. Stimulating and enjoyable -- I hope so anyway! -- for the Palestinians, it is an eye-opening and moving educational experience for the visiting participants . . . A vital part of the cultural and political calendar.” - Geoff Dyer

“The festival is a recognition of the independent life of the Palestinian people. Coming through the invisible barrier of fear has actually filled me with hope. I found deep humanity on the other side.” - Adam Foulds

“PalFest’s uniqueness stems from the fact that during the day it allows writers to carry out that most important of writerly tasks--bear witness . . . We go to PalFest to feel ourselves part of the world.” - Kamila Shamsie

“PalFest is a necessary, confronting and enlightening event for anyone with an interest in writing, freedom and human rights . . . A life-changing experience.” - Bidisha

“Thanks for being who you are and for giving us such exposure to wonderful people. Palestine is proud of you.” - Suad Amiry

“Truly life-changing . . . As a human being and as a writer, this was a revelatory experience.” - William Sutcliffe

“Packed with so much genius and courage and heart I don’t know what to say except thank you and I have new favourite writers.” - Molly Crabapple

“The most rewarding -- and challenging -- literary festival a writer could hope to take part in.” - Jeremy Harding

“One of the most affecting trips of my life.” - Sabrina Mahfouz

“PalFest is a visionary enterprise, there is nothing like it anywhere else in the world that I know of, the radiant intimacy of writing, live audiences, bodies and souls touching, all in a land surviving under occupation.” - Meena Alexander

William Sutcliffe is the author of twelve novels, including the international bestseller Are You Experienced? and The Wall, which was shortlisted for the Carnegie Medal. He has written for adults, young adults and children, and has been translated into twenty-eight languages. His 2008 novel Whatever Makes You Happy is now a Netflix Original film starring Patricia Arquette, Felicity Huffman and Angela Bassett. It was released in August 2019 under the title Otherhood.

His latest novel, The Gifted, The Talented and Me, was described by The Times as 'dangerously funny' and by the Guardian as 'refreshingly hilarious'.

MICHAEL PALIN is a comedian, novelist, actor, playwright, and founding member of Monty Python. He is the author of the novel Hemingway's Chair as well as several books on the history of Monty Python, including The Pythons, and numerous travel guides, including Brazil and Sahara.  He also happens to be one of the funniest people on the planet.  He lives in London, England.

China Mieville has a Ph.D. from the London School of Economics. He lives in England. He is the author of several books, including King Rat, which was nominated for both the International Horror Guild and Bram Stoker Awards for best first novel, and Perdido Street Station, winner of the 2001 Arthur C. Clarke Award.

Adam Foulds is a British novelist and poet. He is the author of The Quickening Maze, which was short-listed for the Man Booker Prize and won the Encore Award and the European Union Prize for Literature, and The Broken Word, which won the Costa Poetry Award and the Somerset Maugham Award. He received the E. M. Forster Award from the American Academy of Arts and Letters and was named one of Granta’s Best of Young British Novelists.

Gillian Slovo is an author, journalist, playwright and the President of English Pen. Gillian has written 12 novels including Black Orchids and Red Dust, which won the RFI Temoin du Monde prize in France and was made into a film starring Hilary Swank and Chiwetel Ejiofor. Her novel Ice Road was shortlisted for the 2004 Orange Prize for Fiction and her family memoir, Every Secret Thing, was an international bestseller. Her play Guantanamo: Honor Bound to Defend Freedom , co-written for the Tricycle Theatre, has played in theatres around the world including New York and Washington DC. Her edited interviews with women politicians was put on as part of the Tricycle's 2010 Women Power and Politics Season. In 2009 she won an amnesty media award for her article on children in detention. She is a reviewer, opinion writer and in 2008 wrote a column for the South African newspaper, The Star. --This text refers to an alternate kindle_edition edition.

Amazon Customer
5.0 out of 5 stars Brilliant!
Reviewed in the United States on July 20, 2017
Brilliant collection of first hand stories of Palestine from some of the best writers out there. Refreshing new voices too. Thanks for putting all these voices into one book. There's a LOT here.
Images in this review

N.K.
5.0 out of 5 stars Powerful Witness
Reviewed in the United States on September 1, 2017
Verified Purchase
For ten years, PalFest has been taking writers to Palestine where they speak, teach, talk, and witness. Then the authors return home and write about what they have seen. This anthology is a testament to the power of that work. (Disclaimer: I am a contributor to the volume. I participated in PalFest 2010).
Read more
2 people found this helpful
Helpful
Report abuse

Darya Design
5.0 out of 5 stars Brilliant!
Reviewed in the United States on July 20, 2017
Verified Purchase
Brilliant collection of first hand stories of Palestine from some of the best writers out there. Refreshing new voices too. Thanks for putting all these voices into one book. There's a LOT here.
Read more

Darya Design
5.0 out of 5 stars Brilliant!
Reviewed in the United States on July 20, 2017
Brilliant collection of first hand stories of Palestine from some of the best writers out there. Refreshing new voices too. Thanks for putting all these voices into one book. There's a LOT here.
Images in this review

Amazon Customer
5.0 out of 5 stars Thi is not a border
Reviewed in the United States on October 12, 2017
Verified Purchase
The most powerful collection of essays.
Read more
Helpful
Report abuse

Katie Delcourt
5.0 out of 5 stars Incredibly eye-opening.
Reviewed in the United States on May 9, 2019
Found this book used at Amnesty International. The writing is incredible. Was very eye-opening to read.
Read more
One person found this helpful
Helpful
Report abuse
See all reviews

Joyce
5.0 out of 5 stars Five Stars
Reviewed in the United Kingdom on June 15, 2017
Verified Purchase
Excellent and informative book on how life is in Israel for Palestinians.
Read more
2 people found this helpful
Report abuse