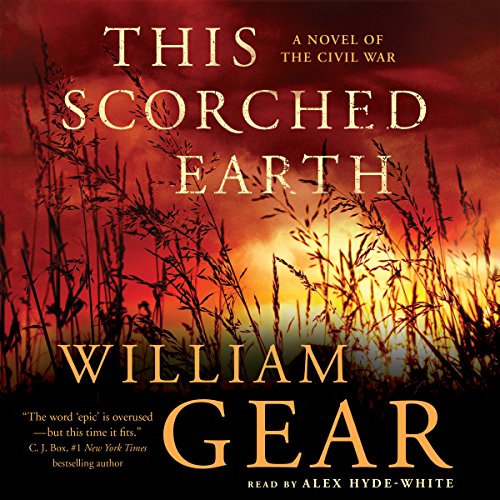 This Scorched Earth: A Novel of the Civil War

The American Civil War tore at the very roots of our nation and destroyed most of a generation. To truly understand the madness and despair of such a horrendous conflict, one needs to pick a moment. Or see that war through one family’s eyes. In rural Arkansas, such were the Hancocks. Devastated by a cruel war, they faced down their personal hells and, in spite of it all, survived. Their survival is a testament to the power of love...and the American spirit. This is their story. And ours.

Special invitation from Audible!
Learn more about Membership
List Price: $42.52
You Save: $2.57 (6%)
By completing your purchase, you agree to Audible’s Conditions Of Use
Sold and delivered by Audible, an Amazon company
Share

4.5 out of 5 stars
4.5 out of 5
128 global ratings
How are ratings calculated?
To calculate the overall star rating and percentage breakdown by star, we don’t use a simple average. Instead, our system considers things like how recent a review is and if the reviewer bought the item on Amazon. It also analyzes reviews to verify trustworthiness.
Top reviews

theresah
5.0 out of 5 stars Sometimes people are not ready to fight but if you would oblige
Reviewed in the United States on April 3, 2018
Verified Purchase
This Scorched Earth
by William Gear
William Gear is not a new name to historical fiction and with connections to his more famous historical fiction books Coyote Summer, and the Morning River, this is a magnum opus of stories. The dynamic characters bring these controversy to prominence, drawing the reader into changing their mind of the history we learned in school. He dives right into the conflict and controversy of the Civil war. Not from the Northern or the Southern opinion but from the good men and women affected by a war they did not want to join the battle for ideals. He defines his characters as a family that does not agree with slavery. Yet they find themselves forced to rationalize it in defense of their home. His characters are affected profoundly by the politics, and effects of the war. William Gear looks at so many parts and controversies of the turbulent history connected to this battle for freedom, life and choice. The Civil War was a battle of wills, ideals, and controversy that made men fight battles against violent, diversive ideals that tore at the fabric of America. Its repercussions have not yet dissipated in the waves of the world history. William shows the brutal reality of the battles, with the repercussions of technological developments of weapons and tactics that are devastating in their effect. He looks into the medical developments before and after the war that changed society, from surgical practices, to the care and maintenance of prisoners. Particularly the mental health changes that have repercussions with our military today like PTSD and other war time affects. The later half of the book looks into the personal changes that happened to those who survive not only the battles but prison camps, and jayhawkers, and other war atrocities. This family is torn apart limb from limb by the war, as all parts of it is divided and devoured by the evil brought from both sides of the conflict. And just surviving is not an option. This book will bring a new light to an old conflict and show men and women today how the whitewashed history books got it all wrong. War is not glory, it is not fame, it is not ideals but a touch of insanity in a world without reason.
Read more
23 people found this helpful
Helpful
Report abuse

Marjorie Price
5.0 out of 5 stars A Civil War epic for the ages
Reviewed in the United States on April 27, 2018
Verified Purchase
"This Scorched Earth" is a new classic that deserves a place on your bookshelf beside such titles as "Gone With The Wind" by Margaret Mitchell and "Centennial" by James Michener. Author William Gear, better known as Micheal W. Gear who writes novels about pre-Columbian America with his wife Kathleen O'Neal Gear, has reached a pinnacle in his career with this book. After working on this epic for a lifetime, Gear has given his readers a story of a relatively unknown part of the Civil War. The Hancock family from northwestern Arkansas is torn apart by the conflict. Some survive battles, rape, and mental breakdowns, others do not. Some are left behind in graves at the family farm; some find new and different lives that they never expected in the boom towns of the Colorado Rockies, and some find peace in the simplicity of the world of Native Americans. Even after finishing the last page (704!) I wanted more! I highly recommend this book not only for those who are already fans of the Gear writing team or lovers of all things Civil War, but for anyone who love diving deep into a tale of a family facing the worst that life can throw at them and surviving.
Read more
9 people found this helpful
Helpful
Report abuse

Tina O
5.0 out of 5 stars Huge Epic! The Civil War brought HOME!
Reviewed in the United States on May 9, 2018
Verified Purchase
I have studied war for many years. I read, then re-read the heart of this novel. As an empath I can say William Gear has done something no one has ever done. He had me living a book First person. The colors, sights, smells, sounds, and taste. All turns to unknown ,things change quickly, strange happening, adrenaline, fear, revulsion, abuse, pain, fire and death. No one has control when it's over. The children of the Hancock family move on to find whatever peace they can in a post war world that is moving west. Finding themselves will they each other? Will they find peace? Forced work for and against them in the over the top EPIC tale of survival in a Scorched Earth. I recommend this book to everyone who really cares about why we are who we are.
Thank You my friend William Gear
Sincerely - Tess Cole
Read more
8 people found this helpful
Helpful
Report abuse

LG
4.0 out of 5 stars Enjoying the book, Y'all.
Reviewed in the United States on August 13, 2018
Verified Purchase
I haven't yet finished the book but am really enjoying it. Pace of the story moves along at a good pace. Good character development. Very graphic so be warned if that is a concern for you. Love the shorter chapters as I can pick up the book when I have a few free minutes or so to read. One issue I have with the author however is that he frequently uses the word "y'all" in the singular. Having been born and raised in the South, that drives me crazy and takes away a bit from the authenticity of the novel. A true Southerner NEVER uses the word "y'all" unless referring to at least two people. It is used only in the plural. A little thing to must people, I'm sure. But it drives me crazy!! 😜
Read more
6 people found this helpful
Helpful
Report abuse

Jim Birch
5.0 out of 5 stars Epic story of the Civil War and its long-term effects on an Arkansas family
Reviewed in the United States on June 30, 2018
Verified Purchase
In this epic novel of the American Civil War and its aftermath, William Gear recounts the stories of the Hancock family of Arkansas in impressive detail. Members of the family are dispersed during and after the war, only to be humiliated by their experiences in battles, in prison camps, at the hands of rogue former soldiers, and even by internal guilt in not being able to protect loved ones from harm. The stories are told simultaneously in short, fast-paced chapters that alternate among the main characters.

One lesson is that the brutality of war begets even more brutality. The deep scars of war often last well behind truces and surrenders and that the signing of peace treaties does not always bring peace. In the long run, there are very few winners, but those who eventually come to grips with the brutality can begin to put it behind them and can persist to at least be survivors.
Read more
5 people found this helpful
Helpful
Report abuse

Ron Briggs
5.0 out of 5 stars A Must Read
Reviewed in the United States on April 14, 2018
Verified Purchase
William Gear uses all of his talents as an anthropologist, archaeologist, historian, and story teller to bring the story of the Hancock family of Northwest Arkansas to life. The family of six experience the American Civil War, in all its extremes.
Many accolades have been bestowed on Mr. Gear's masterpiece and I will not try to top those, other than to say This Scorched Earth is A Must Read, no matter what your preferred genre is.
Read more
8 people found this helpful
Helpful
Report abuse
See all reviews

welshsweetie
4.0 out of 5 stars Good Read
Reviewed in the United Kingdom on October 30, 2020
Verified Purchase
I found it a bit long, and felt some parts didn't really add anything to the story, but still a good read. A bit gory when it comes to describing the battles, but nothing too over the top and probably pretty tame to what it would actually have been like to be there. The Civil war takes up most of the book, going from start to finish, I'd have liked a bit more of an even split between the war and the west, but that's just a personal preference. The characters are likeable enough and each have their individual story to tell with very different experiences.
Read more
Report abuse

Happy dad !!!
5.0 out of 5 stars Total history.
Reviewed in the United Kingdom on April 20, 2019
Verified Purchase
The best description of the hell on earth that was The war between the States.
Read more
Report abuse

Lee Bertsch
5.0 out of 5 stars Another great book by Michael Gear.
Reviewed in Canada on February 7, 2020
Verified Purchase
Follows a family through the civil war, Michael develops the character in the book so well you are part of the tragedy that follows this family through the civil war and aftermath. His description of civil war battles is accurate and horrific. Page turner and a great story if you like Michael Gear storytelling this book is excellent.
Read more
Report abuse

wilfried grünert
5.0 out of 5 stars Fantastisches Buch
Reviewed in Germany on December 7, 2019
Verified Purchase
Ein tolles Frühwerk des Schriftstellers im Michener-Stil.
Read more
Report abuse
Translate review to English
See all reviews
Back to top
Get to Know Us
Make Money with Us
Amazon Payment Products
Let Us Help You
EnglishChoose a language for shopping. United StatesChoose a country/region for shopping.
© 1996-2022, Amazon.com, Inc. or its affiliates