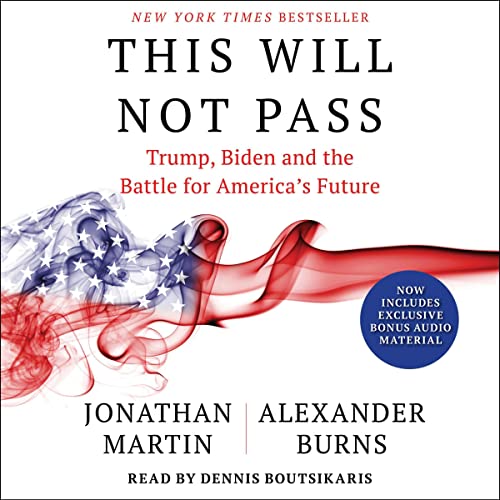 This Will Not Pass: Trump, Biden and the Battle for American Democracy

The shocking, definitive account of the 2020 election and the first year of the Biden presidency by two New York Times reporters, exposing the deep fissures within both parties as the country approaches a political breaking point—now including exclusive recordings from the January 5th and January 11th GOP Conference calls referenced in the book’s original reporting.

This is the authoritative account of an eighteen-month crisis in American democracy that will be seared into the country’s political memory for decades to come. With stunning, in-the-room detail, New York Times reporters Jonathan Martin and Alexander Burns show how both our political parties confronted a series of national traumas, including the coronavirus pandemic, the January 6 attack on the Capitol, and the political brinksmanship of President Biden’s first year in the White House.

From Donald Trump’s assault on the 2020 election and his ongoing campaign of vengeance against his fellow Republicans, to the behind-the-scenes story of Biden’s selection of Kamala Harris as his running mate and his bitter struggles to unite the Democratic Party, this book exposes the degree to which the two-party system has been strained to the point of disintegration. More than at any time in recent history, the long-established traditions and institutions of American politics are under siege as a set of aging political leaders struggle to hold together a changing country.

Martin and Burns break news at every turn, drawing on hundreds of interviews and never-before-seen documents and recordings from the highest levels of government. The book asks the vitally important (and disturbing) question: can American democracy, as we know it, ever work again?

Your audiobook is waiting!
Learn more about membership
List Price: $28.34
You Save: $3.54 (12%)
By completing your purchase, you agree to Audible’s Conditions Of Use
Sold and delivered by Audible, an Amazon company

Scott Ludwig
5.0 out of 5 stars The truth hurts
Reviewed in the United States on May 5, 2022
Verified Purchase
For all of you one-star reviewers, be honest: reading about the truth is painful. In this case, a painful reminder of the darkest period of time in the history of our democracy. Thankfully, democracy survived.

R. Patrick Baugh
5.0 out of 5 stars May be the best 2020 Election book
Reviewed in the United States on May 3, 2022
Verified Purchase
Maybe it’s best not to rush out a book right after the election is over, like many reporters. Given time, these New York Times reporters dug up tons of information (a lot that you’ve already heard about in the last few weeks) and have written a blockbuster book. We’ll be talking about the revelations in this book for a long time to come. The McCarthy recordings are just the top of the iceberg, read on for more insider facts.
Read more
182 people found this helpful
Helpful
Report abuse

Masriki
5.0 out of 5 stars Not a parody
Reviewed in the United States on May 4, 2022
Verified Purchase
Martin and Burns populate This Will Not Pass with narratives and anecdotes that generate a mixture of reactions. Some are surprising, some are entirely expected, and many give rise to eye-rolling.

The most high-profile story to date has been Kevin McCarthy’s having told other Republican lawmakers that he would suggest to Trump that he resign, lying about it, confronted with the tape of it, and then coming amazingly close to lying about lying about it.

Lindsey Graham’s well-known ping-pong ball convictions: This bounces from January 6, when he threatened a White House lawyer with drumming up support in the Cabinet to remove Trump from office via the 25th Amendment, to the authors’ firsthand narrative of Trump putting him on speakerphone unknowingly, so the reporters were free to listen to his amplified shameless grovel of the Wonders of Trump.

On the surprising-even-for-Sen.-Kyrsten-Sinema front, her arguing with White House staff about being asked to wear a mask when seeing President Biden, and in other parts of the book, bragging about making Palin-esque political use of her cleavage around male GOP lawmakers.

And yes, as reported, Trump had a trinket treasure room filled with MAGA merchandise next to his office in the White House.

Twenty five years ago, or even ten years ago, some of these could have been Saturday Night Live skits. Martin and Burns have shown that now, sadly, it’s real.
Read more
104 people found this helpful
Helpful
Report abuse

Marsha Starr
1.0 out of 5 stars What a disappointment!
Reviewed in the United States on May 4, 2022
Verified Purchase
Just one more Trump bashing book (yawn), capitalizing on the opportunity to do so. I'm not even a Trump supporter and I came away from this book distressed that it was soooooooooooo blatantly biased. Biden's perceived halo gets polished, spinning his blunders as achievements. Addressing his rapidly diminishing approval rating, no explanation was offered, just that his feelings get hurt learning that. He is painted as a wise, focused, competent soul, a visionary devoted solely to the interests of the American public,, completely ignoring the multitude of blunders and gaffes associated with his presidency.Waste of money!
Read more
275 people found this helpful
Helpful
Report abuse

Western New York Reader
5.0 out of 5 stars Why so many negative reviews from folks who likely didn't even purchase the book?
Reviewed in the United States on May 5, 2022
Verified Purchase
With Amazon's "Verified Purchase", can we assume that the negative reviewers perhaps didn't even get the book, much less read it?
I'm about 1/3 of the way through and I'm amazed at the thoroughness of the authors' research and substantiation.
I am grateful for the credible news agencies.
Read more
80 people found this helpful
Helpful
Report abuse

1776 Lady
1.0 out of 5 stars Huge Error!
Reviewed in the United States on May 4, 2022
Verified Purchase
I failed to read the 'Bio's' on these authors! I 'thought' I was ordering a book on the issues facing our country today. After reading only 22 pages of snarky, derogatory comments about Trump and the Republicans, I checked the authors' Bio's & discovered they were simply CNN henchmen! If you hate Trump, hate Republicans, maybe even hate America, this book is for YOU!
Read more
222 people found this helpful
Helpful
Report abuse

linda galella
HALL OF FAMETOP 50 REVIEWERVINE VOICE
3.0 out of 5 stars Roll up your pants legs,
Reviewed in the United States on May 3, 2022
Verified Purchase
the snark is flowing and it’s deep.

Martin and Burns are two highly lauded political reporters for the New York Times. From that aspect, this book is a success. There is a lot of reporting and according to their introduction, they employed every method available to them to collect data from the people involved with the election in 2020, all its surrounding events both pre and post, January 6th, Biden’s first year, Georgia’s run off election, George Floyd, and of course, every possible opportunity to bash, trash and thrash Donald Trump.

What’s different about this book from the myriad of other political books? These authors give us a detailed insight to the players behind the big guys. I did read things that were new to me, I’m just not sure how much to trust the presentation given the obviousness of the slant. More than a few times it felt like I was reading a script for an 8 part streaming video. Still, the introduction to individuals that none of the reporting agencies brought to light has value.

“This Will Not Pass” is worth reading. If you’re right of center, prepare to be annoyed but informed with potential new facts. If you’re open minded, this is a book that will suit you well and provide food for tho’t and hopefully, positive conversation. Folks to the left of center will cheer unless they are thoughtful and find that even the authors are concerned about the state of our democracy📚
Read more
146 people found this helpful
Helpful
Report abuse
See all reviews

Huw Davies-Tallon
2.0 out of 5 stars Terrible disappointment
Reviewed in the United Kingdom on July 11, 2022
Verified Purchase
After reading a glowing review in the FT I imagine reading a unbiased retrospective of the last 2 years in US presidential and national Politic's! Instead it is a partisan biased boring badly written mess! I am no Trump fan but they are so pro Biden it is laughable considering he is now being view universally even by his own party as a disastrous president. Save yourself the money and buy anything else!
Read more
Report abuse

James Baird
5.0 out of 5 stars A Sobering Read
Reviewed in Canada on May 23, 2022
Verified Purchase
While a bit of a slow start, this book guides the reader through what US politicians were really thinking about in the last few years. It lays bare US politics and politicians in a way that readers can understand and relate to. The slow start lays the ground work for the remainder of the book and it’s conclusions. I highly recommend this book for anyone with an open and intelligent mind.
Read more
Report abuse
See all reviews