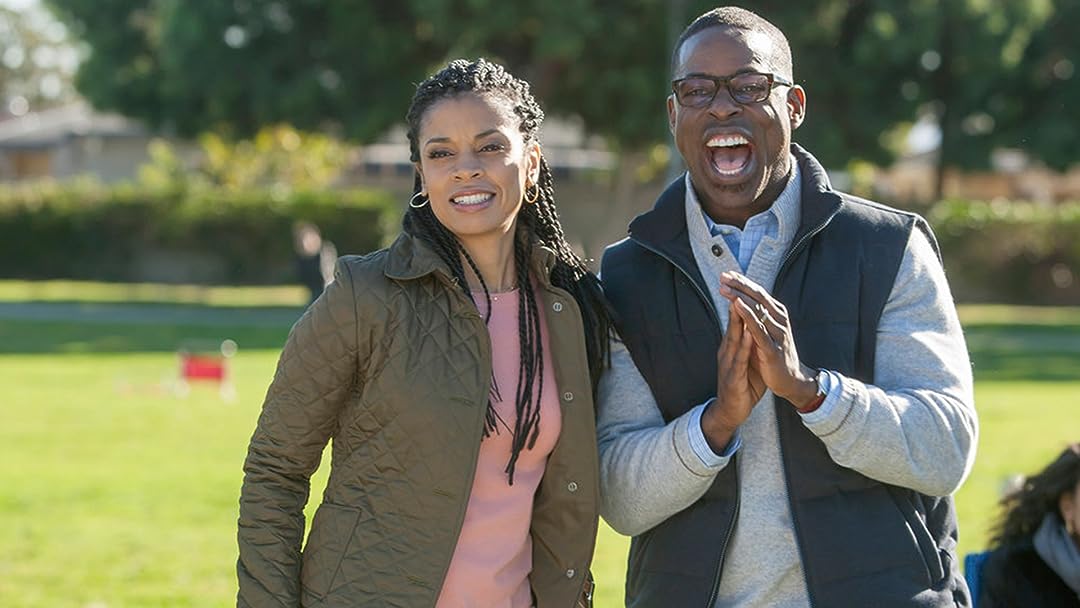 (4,706)
8.62017X-RayTV-14
From the writer and directors of Crazy, Stupid, Love comes a smart, modern dramedy that will challenge your everyday presumptions about the people you think you know.

I plan to stick with the Pearsons as long as they are on TV. I want to hear Katie and Mom sing. Randall and Beth. Jack and Rebecca. Two lovely couples. I want to see the adult Kevin continue to grow. William's poetic words of wisdom touch my heart. Awesome show - This Is Us.

Mercedes McveyReviewed in the United States on March 1, 2018
5.0 out of 5 stars
Very unique, charming, creative show. A+
Verified purchase
I started watching this because I saw that one of my cousins on Facebook liked it. I have no idea if she really likes this show, or if it's one of those things that facebook just somehow decided to tack onto your page in "Likes." But, anyway, I decided to put on a "background," show while I went through emails or played a game on my phone, but I got hooked!
It's starts out with (a scene) with what I thought was a very shallow character, but then it was like, "Wait...", I think I like this guy. He is not what you expect, from someone who looks like him, or ? It surprizes you.
Somehow all of the characters are like that. Like family members, annoying sometimes, charming and winning you over at others. The story is just so refreshingly unique, even the technique of having the two stories going on at the same time, for this type of drama.
I did't expect to like this or care about this show, but it's very well done. I think it takes some talent to create a show that is not that same storyline or theme as every other show in it genre, these days. Brava!

memynameicallmyselfReviewed in the United States on October 23, 2016
5.0 out of 5 stars
One Of The Best Shows Ever!!!
Verified purchase
This is one of the best shows I have ever watched!!! It is touching, moving, and the end of episode one was such a surprise. This show makes you think about what is really important in life. I can't wait to watch the rest of this season.
56 people found this helpful

Ralph J. WoldtReviewed in the United States on March 5, 2017
5.0 out of 5 stars
Beautiful story of love, family, life
Verified purchase
This is probably the best series I have watched, ever. I bought season one blindly, reading the negative rev here first, found nothing really objectionable, so read a few positive ones....and I am so glad I watched.it....binge watched it, over three days. Real life, love, conflict, pain, joy, sorrows. Complex characters, all flawed, all so human. Life at its most beautiful, at its messiest. I can't wait for season two...
25 people found this helpful

Happy CustomerReviewed in the United States on April 11, 2018
5.0 out of 5 stars
Worth Every Tear
Verified purchase
I'm not saying anything new here. Everyone loves this show and there's a reason for that. Insanely good writing. Superb acting. A cast that you either relate to personally or even if you don't, you fall in love with them, quirks and annoyances and all, and walk away with the lesson learned that you cannot judge any book by its cover. I cried through almost every episode, sometimes almost flat out weeping aloud. The only warning I would give you if you want to watch this and get sucked into it is if you've ever experienced significant loss in your life, like the death of a loved one, or you have a crappy marriage or had a bad childhood, this show might traumatize you. Simply because it will serve as a reminder of what never was or what was lost. For one, Jack is the perfect husband and father, beautifully portrayed by Milo Ventimiglia (who said he drew upon what he observed in his own father as he played that role). He makes men who lack in those areas look even worse, and those who live with those men feel even worse. So if you need to avoid triggers because of PTSD issues, this isn't the show to watch. I know people who had to stop watching it because it just hurt too much. I loved it though, and found the journey worth it. I would watch it again and again.
10 people found this helpful

KravitzReviewed in the United States on December 28, 2018
5.0 out of 5 stars
Who Doesn't Love This is Us?
Verified purchase
I'm not much for watching television programs. But, I saw all of the praises on Facebook of this show by my friends, and because of thinking that I would be lost by missing the first two seasons, just never tuned in until the beginning of the third season. I fell in love with the show's writing and acting and the family portrayed in this wonderful family oriented show. Watching only the third season, I wanted to know more about the history of the family of Jack and Rebecca, although I did know that Jack had died....because of the teeth gnashing on Facebook. I have some catch up to do. The show's characters are from Pittsburgh's (Steeler's and Terrible Towels fans) nearby suburban neighborhood of Bethel Park, which is about a 20 minute drive from my town. The acting is some of the best that I've ever watched. It's a show where you are disappointed for each episode to end. The story line (Love and life story of Jack and Rebecca) constantly jumps back and forth from present day, back to the past, and then back up to present day multiple times in each episode. It is so well written and actually easy to follow, even though I just started to watch during the third season. So, I needed to catch up on some much needed early history, like where did Randall (his birth family story line) enter the family and why? And why was there such animosity between Kevin and Randall, for example. So, I just spent the last two days binge watching the first season of "This Is Us". I have just ordered the second season and can't wait for it to arrive. It will be another binge watch weekend because this show is just one of the best shows ever produced/written/directed/acted on television today. I am proud to add this to my video library.
4 people found this helpful

Leslie BiallerReviewed in the United States on July 2, 2017
5.0 out of 5 stars
A storm of beautiful intensity
Verified purchase
If, as Raymond Chandler noted, "All cynics are sentimentalists at heart," then the often-heart tugging "This Is Us," one of the few broadcast series from 2016-2017 with any buzz, should certainly appeal even to them. With its fractured time lines, its blend of social satire and family drama, and its well-drawn characters it deserves all the hype.

The entire 18 episodes are now available for streaming on Amazon, and it's well worth a binge. It begins with three people celebrating their birthdays in the present, and then flashes back into the past only to return to the present, although it takes some time to make this connection; and when it does (toward the end of the first episode), it comes at you fast.

And that format sets the stage for most of the episodes, as we learn more and more about the characters we're following. The billed stars, Milo Ventimiglia (who nails his part) and Mandy Moore (ditto), anchor the past as Jack and Rebecca Pearson, parents of triplets, while Chrissy Metz, Sterling K. Brown, Justin Hartley, Ron Cephus Jones, and Susan Kelechi Watson hold up the present. Metz, who is majorly overweight (or is made up to appear so), steals every scene she's in (especially when she plays with--or against--her boyfriend, a superb Chris Sullivan). And Jones is a joy to watch But there's no show without Moore--a storm of beautiful intensity.

The transitions back and forth in time are nearly seamless, and the supporting cast is superb. Props especially to Gerald McRaney, playing an ob/gyn MD, who is given several cameos in different episodes, and always delivers a gemlike performance. Milana Vayntrub, who plays a playwright with owlish glasses, has a few bits here and there. You just know sooner or later those glasses will come off, and then maybe you'll think "isn't that _____?"

I am avoiding describing any of the scenes, because every one advances the overall plot. So have the Kleenex ready. It's ok to cry even if--or should I say especially if--you're not a cynic.

Fair warning: Since this is a broadcast drama the obligatory Thanksgiving and Christmas episodes do appear. But they are gems. Don't skip over them thinking "I know what's going to happen here." No, you don't. And, of course, from time to time comes the usual network TV setup--somebody has a problem, another character delivers a brief lecture, the first character sees the light, and on we go as acoustic guitar music wells up on the soundtrack. Maybe you'll think "if only this was an Amazon original . . ." when scenes like that happen. But it isn't. And when something this good comes along, take what they give you and enjoy it.

NOTES AND ASIDES: This review is for the entire 18-episode series, each of which I have seen. I have tried to pitch my review to all, but I hope it is especially helpful for the people, who apparently exist, who needed some guidance from the New York Times, which ran an article explaining how "cord cutters" could watch the Oscars, which aren't streamed.
One person found this helpful

C. HelmanReviewed in the United States on March 18, 2017
5.0 out of 5 stars
One of the finest miniseries going.
Verified purchase
Another movie or series I decided to try by renting the first two episodes and then I was hooked. It touched me on so many levels. The humor is great, the drama is real, and the acting is so very good. The story line is original. However, being about the age of the main character, the parents, and my husband and I starting out in a tree house before we had our five children, plus now I'm widowed, there happens to be a lot in this story that hits home with me, and I love it. I highly recommend it. I love the way it is filmed with flashbacks and each character is developed very well.
9 people found this helpful
See all reviews
Back to top
Get to Know Us
Make Money with Us
Amazon Payment Products
Let Us Help You
EnglishChoose a language for shopping. United StatesChoose a country/region for shopping.
© 1996-2021, Amazon.com, Inc. or its affiliates