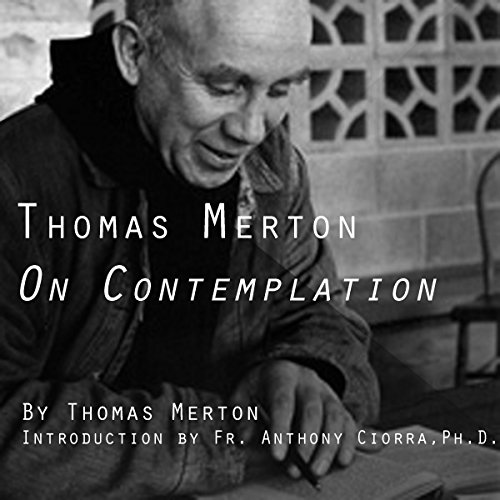 You are invited to sit at the feet of a contemplative master. After a radical conversion experience, Thomas Merton became a Trappist monk in the Abbey of Gethsemani. At the heart of Merton's transformative conversion was contemplation. Now, this series invites you into that profound contemplative experience in six remastered conferences delivered by Merton. As you listen to Merton in his own voice, you will encounter his most profound teachings on prayer and contemplation.

Special invitation from Audible!
Learn more about Membership
List Price: $14.95
You Save: $4.96 (33%)
By completing your purchase, you agree to Audible’s Conditions Of Use
Sold and delivered by Audible, an Amazon company
Share

Noreen P Duggan
5.0 out of 5 stars ANOTHER THOMAS MERTON MUST HAVE FOR YOUR LIBRARY
Reviewed in the United States on January 9, 2017
Verified Purchase
ANY WORK BY THOMAS MERTON DESERVES THOUGHT AND REVIEW. HOW CAN AN AUTHOR BE SO DEEP YET VERY UNDERSTANDABLE.
Read more
Helpful
Report abuse

Michael
5.0 out of 5 stars Excellent Spiritual Resource
Reviewed in the United States on August 13, 2014
Verified Purchase
An excellent resource for anyone who is interested in Merton's presentation of the Catholic contemplative tradition, or even Merton's contributions to spiritual formation more generally. Here, one gains a greater appreciation for his prophetic voice and a greater grasp of the need for Christian-based silence and solitude in an ever-increasingly frenetic and self-indulgent American society. I highly recommend this.
Read more
5 people found this helpful
Helpful
Report abuse

Caraculiambro
5.0 out of 5 stars serviceable without having to buy into Catholicism's ontological claims
Reviewed in the United States on February 3, 2015
You are invited to sit at the feet of a contemplative master, you see. After a radical conversion experience, you see, Thomas Merton became a Trappist monk in the Abbey of Gethsemani. At the heart of Merton's transformative conversion was contemplation, you see. Now, this series invites you into that profound contemplative experience in 6 remastered conferences delivered by Merton, you see. As you listen to Merton in his own voice, you see, you will encounter his most profound teachings on prayer and contemplation, you see.

I bought this from its currently licensed distributors and have been very happy with it. Not much of a Catholic here, but a great deal of what Merton says is applicable to secular meditation. At least superficially.

1. Most of the first CD is taken up by a couple of unnecessary introductions. They're long, so basically you're only getting a bit more than 3 CDs.
2. Thomas Merton had a rather annoying mannerism. Saying "You see" after virtually every point. It's been hard for me to get around that. The first couple of minutes when you hear him, you're like "Uh, he's not going to do that after every sentence for the next 3 CDs, is he?" He is.
Read more
9 people found this helpful
Helpful
Report abuse
See all reviews
Back to top
Get to Know Us
Make Money with Us
Amazon Payment Products
Let Us Help You
EnglishChoose a language for shopping. United StatesChoose a country/region for shopping.
© 1996-2022, Amazon.com, Inc. or its affiliates