You've subscribed to Loki (2004)! We will preorder your items within 24 hours of when they become available. When new books are released, we'll charge your default payment method for the lowest price available during the pre-order period.
Update your device or payment method, cancel individual pre-orders or your subscription at
Your Memberships & Subscriptions
There was an error. We were unable to process your subscription due to an error. Please refresh and try again. 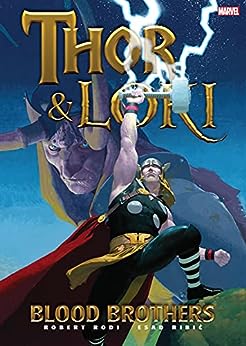 Audible Holiday Deal
Save 46% on your first 4 months. Get this deal
Books In This Series (2 Books)
Complete Series 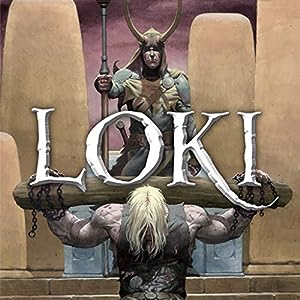 4.4 out of 5 stars
4.4 out of 5
89 global ratings
How are ratings calculated?
To calculate the overall star rating and percentage breakdown by star, we don’t use a simple average. Instead, our system considers things like how recent a review is and if the reviewer bought the item on Amazon. It also analyzes reviews to verify trustworthiness.
Top reviews

Thanatos
5.0 out of 5 stars Heavy is the Head that Wears the Crown
Reviewed in the United States on September 2, 2018
Verified Purchase
Loki has often fallen under the shadow of his more popular brother; Thor. The Mighty Avenger often holds the spotlight, while Loki be mocked and scorned. Writer Robert Rodi upends this pattern, giving the stage to Loki in a rare character miniseries. After ages of scheming The Trickster God stands triumphant over Asgard. In this setting we get a great character study of him. It explores the roots of his villainy and asks the question, who is Loki without those he hates? This miniseries stands up to other great Loki works by writers such as Kieron Gillen, Al Ewing, and Roberto Aguirre-Sacasa. It helps define one of Marvel's most complex villains. It also has the best Esad Ribic artwork I've seen, period. Every single panel looks like a watercolor painting. I'm not sure where this fits into the Marvel continuity, or if it even does, but regardless it's worth a read.
5/5

Extra Info:
Here's a list some other great Loki stories out there for you to read after this. I've pur them in order of continuity for your convenience.
1. Thor: The Trials of Loki by Roberto Aguirre-Sacasa
2. Journey Into Mystery by Kieron Gillen
3. Young Avengers by Kieron Gillen
4. Loki: Agent of Asgard by Al Ewing
Read more
5 people found this helpful
Helpful
Report abuse

Austin Murphy
5.0 out of 5 stars Loki Revealed
Reviewed in the United States on December 25, 2011
Verified Purchase
*Spoilers*
If you want to know what would happen if Loki won, than this tells you. This explores Loki's character more than any other story and out of the hundreds of Thor comics I've read. This showed who he truly was, his motives, his character, everything. I've never read a book so interesting with hardly any action. There's some very memorable quotes in here as well and the artwork fits the book perfectly. It's funny it seems as though Loki has won from the start, but when Loki knows what he truly wants it's too late and loses again like the villain always does. This tells you why Loki can't ever win. Even the characters in this book say he can't, even though he rules over Asgard and imprisons all of them. The characters themselves already know how this going to turn out and Loki doesn't want to admit it. This book made me wanted Thor to win, but Loki to not fail and there can't be both, so the eventual outcome of every story happens. Good always wins, but why does evil always lose eventually? It's like asking why we read comics if we know the bad-guy is always going to lose. Loki loses in this story, because most of his life he's been evil and when he has a turn of heartt, he's just too late. All of this evil choices, brought his donwnfall before he made his good one. It's sad, but you can't feel that bad for him. It's a great story and some of the best comics I've read in a while. I recommend it, you'll truly understand a great character.
Read more
9 people found this helpful
Helpful
Report abuse

R. D. Anderson
5.0 out of 5 stars if you're a comic reader and collector
Reviewed in the United States on July 9, 2021
Verified Purchase
this is a great storyline to get into. I wasn't very interested in Thor too much when I was growing up, but there were titles in some of his stories that really were great. This is just another one of those thats worth picking up, sitting down and diving into it.
Read more
Helpful
Report abuse

Rafe
4.0 out of 5 stars Fun
Reviewed in the United States on January 3, 2014
Verified Purchase
I grew up with the Marvel comics and loved Thor, the entire Norse mythos fascinated me, I even got a friend to call his dog Loki (hey, he was mischievous). This delves into the back story about how the brothers were raised, how they turned into the gods that they are, and offers a fascinating glimpse into their relationship, both with themselves and their father, Odin. I know, starts to sound like a soap opera , but life is often such, and many stories reflect this. This is well formatted for the Kindle Fire and a thoroughly enjoyable read.
Read more
2 people found this helpful
Helpful
Report abuse

Jmaynard
4.0 out of 5 stars talk about sympathy for the devil!!
Reviewed in the United States on July 17, 2013
Verified Purchase
Loki is my favorite Marvel character, followed by Thor. Indeed, he is my favorite villain in literature or film. He's a complex character who goes beyond simple "bad-guy." He needs to cause chaos, but has also switched sides. Moreover, his backstory is tragic, allowing readers to sympathize with him even as they root for Thor. So, I was eager to read "Blood Brothers" in which Loki, from his own POV, succeeds in taking Asgard.

The book opens with Thor in chains before Loki, now king of Asgard. He loves seeing Thor brought so low, but finds himself burdened with the actual work of ruling. When Loki is alone, Hela appears to convince him to execute Thor. What commences is Loki's struggle with the decision as his history unfolds. At one point, Balder reveals to Loki that there are many universes, many Lokis, many Thors, all locked in the same cycle. And in all of them, Loki is defeated. What is disturbing is that the Asgardians excuse their cruelty toward Loki as part of a this cycle. Yet, they do not excuse Loki's action on the same principle. He is held accountable; which further reinforces his tragic nature. Loki has no choice in his destiny, but is condemned for it none-the-less.

Loki slowly comes to the realization that, as light needs darkness, Loki needs Thor. But, like all other Lokis, he will not be allowed to escape his destiny. Only this time, the taste of Thor's victory is bitter - for Loki and for readers. I am not certain if the authors intended it to be so, but this story not only makes Loki especially sympathetic, it portrays our usual heroes (Sif, Balder, Thor) as cruel bullies who tormented and ridiculed Loki all his life; dividing brother from brother. When Loki reveals why he will kill Thor and not the others, it is heartbreaking. For the first time, I did not like Thor and I did not want him to triumph.

Usually, I do not comment on art since it is so subjective. However, in this instance I must because it seriously impacted my enjoyment of the story. I HATED it. Primarily, I did not like how the artist drew Loki as a shriveled, ugly old man with missing teeth. It's so cliché for a villain to be ugly in any case, but here it was jolting because Loki is not the typical villain. Plus, he's a shapeshifter. Why would he choose to look that way? It just didn't work.

The book is filled out with two of Loki and Thor's original encounters by Stan Lee and Jack Kirby, and an excerpt of Loki from the Siege saga. The Lee/Kirby stories were a nice addition, though the Siege bit is an odd choice since it doesn't stand alone. There is also unused art from the main story and the creators' "pitch" for the storyline.

Overall, though I hated the art work, the story was so compelling and emotional I will still give it 4 stars. Highly recommended. One thing readers should note is that though this book includes "Loki #1-4", it should not be confused with  Thor: The Trials of Loki , which also includes a completely different "Loki #1-4"!! I almost didn't buy this because I thought it was the same material.
Read more
3 people found this helpful
Helpful
Report abuse
See all reviews

gary packer
5.0 out of 5 stars Finely written!
Reviewed in the United Kingdom on June 22, 2019
Verified Purchase
This is a must read!!!! See the story of thor from the other end of the spectrum, through the eyes, of Lok
Read more
One person found this helpful
Report abuse

Patricia Carcelen
5.0 out of 5 stars Arrived ahead of time!
Reviewed in Canada on January 30, 2020
Verified Purchase
Thank you! The book is what I expecting, I really like it!
Read more
Report abuse

Shanta prasad
4.0 out of 5 stars Four Stars
Reviewed in India on March 30, 2017
Verified Purchase
Art is just amazing. Loki is the one to be heard here.
Read more
Report abuse

Anna- Sophie Gaze
5.0 out of 5 stars THOR LOKI!!
Reviewed in the United Kingdom on February 23, 2014
Verified Purchase
Both such great character's it's very nice to read Comic's like this ( should i say Graphic Novel's as it is hardback) thank you thank you
Read more
One person found this helpful
Report abuse
See all reviews