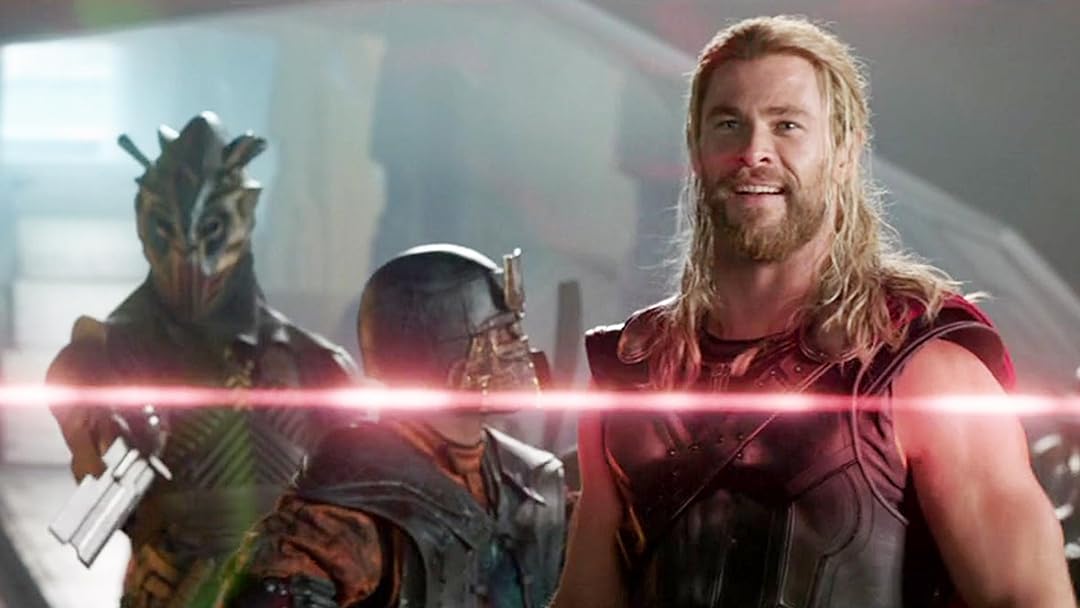 (33,161)
7.93 h 19 min2017X-RayPG-13
In Marvel Studios’ Thor: Ragnarok, Thor must race against time to stop Ragnarok – the destruction of his world and the end of Asgardian civilization at the hands of the ruthless Hela.

Ted H.Reviewed in the United States on April 3, 2018
5.0 out of 5 stars
We are both 60+ seniors and we both enjoyed the movie immensely
Verified purchase
I took my wife to see this and she is not a comic book fan AT ALL! We are both 60+ seniors and we both enjoyed the movie immensely. I'm grew up on the "Silver Age" of comics, mostly DC with the occasional Spidey, Submariner, Hulk, Iron Man, & THOR.. WOR, Channel 9 in New York used to run a Marvel series back in the late 60's and I loved 'em (You can watch them on YouTube). As a matter of fact this was the show that created the great Spidey theme song that even The Ramones covered. "Spider-Man, Spider-Man, does whatever a spider can..." is a tune that I still sing to this day. Getting back to the subject at hand - "Thor: Ragnarock". Chris Hemsworth is charming and extremely likeable and that is what makes this movie work so well. It's a special something that even Downey Jr. doesn't have. While RDJ is likeable, his charm seems to be slightly forced. It’s not as comforting as Hemsworth's charm seems to be. I'm a hetero through & through yet I have to admit to having a wee bit of a bro-mance with CH. As a child of the 60's & 70's I prefer Hemsworth's Thor with the long locks. I mean when you think of Thor, you think of the Hammer and the long blonde, Scandanavian locks but he's so handsome he could have a freakin' Mohawk and he would look amazing.
I'm not a huge Mark Ruffalo fan and while he has done a good job with his run of the Hulk character, when he is in the David Banner "mode" (for lack of a better term) is cerrainly the weak link of all the main character. Though it's in the Hulk form where he really shines. The one and only unique Jeff Goldblum is as quirky and charming as always - even whilst playing a villain. As usual Tom Hiddleston's Loki is frustrating. Though, this is not a knock on Hiddleston - on the contrary. I say frustrating only because of his likeability as an person makes you wishing he was always one of thd "good guys". I don't want to add spoilers so that's all that I'll say about Loki. Idris Elba as usual is magnificent as is Cate Blanchett, who is almost unrecognizable as Hela. She's the actor that Streep use to be. Tessa Thompson who I became of aware of in "Creed" where her quiet sensuality almost stole that movie was another bright spot in a movie that had many.
What really pushed this movie to the top 5 of my favorite super hero of all-time - ironically - was the COMEDY! Yes, I said comedy. I went to see this weeks after it had hit the theatres so there was my wife, myself, & two guys in the theatre...an that was if! Well the four of us were belly laughing throughout the entire movie. Even during most of the many action scenes. Laughter is what will always come to mind when I think of "Thor: Ragnarock", knee-slapping laughter.

Philip WilliamsReviewed in the United States on March 13, 2018
5.0 out of 5 stars
3D Blu-Ray great, Disney awful
It's a shame that Disney appears to have completely discontinued support for 3D blu-rays in the US (The Last Jedi didn't get a domestic 3D either, so that pretty much makes it official I suppose).
That being said, if you do have a 3D capable system at home this is a great presentation. Thor Ragnarok features IMax switching aspect ratios, where many high impact scenes open up to fill more of the screen - a really great enhancement to the 3D effect. My 5 star review is for the superb 3D blu-ray, Disney gets 0 stars for skipping a domestic release.

As for the inflated pricing, these are imported discs being sold by third parties so that's what happens when a studio bails on a major market and creates a demand vacuum...
The good news is that (so far) Disney's 3D blu-rays released in the UK have been region free, so if you don't mind waiting a bit for the overseas shipping, don't hesitate to grab this from Amazon UK. Well worth the wait if you're a 3D fan!

bad_tatersReviewed in the United States on January 18, 2019
1.0 out of 5 stars
Huge disappointment.
Verified purchase
They diminished the Avengers franchise for me with this one.In the previous years of Avengers movies we were entertained by the ongoing evolution of stellar special effects combined with well written drama.There was great emphasis placed on creating a mood of seriousness and sense of danger and peril for the Avengers.A little comedy sprinkled here and there was ok and it really didnt hurt the over all sense of drama.But Ragnarock is void of the drama and sense of excitement and seriousness that made the Avenger franchise so great.While stellar special effects are in great supply in Ragnarock the drama,the tension and edge of your seat excitement is not.The movie has two story lines,one makes sense and the other
does'nt.The flick moves from one liner gaffes to slapstick keystone cop type humor.One minute Thor is being the god of thunder and the next minute he is able to be subdued by a net while thugs kick the crap out of him,its plain stupid.Nearly everything that happens in the movie has an attempt at dumb juvenile comedy imposed on it.What a disappointment.
27 people found this helpful

Colonel DReviewed in the United States on May 11, 2018
5.0 out of 5 stars
Thor- Ragnarok is a blast; exciting and funny- highly recommended!
Verified purchase
This film provides the most fun I’ve had watching a movie in quite some time. Superhero flicks of late have taken a dark turn (starting with the “Dark Knight”) and really have been taking themselves too seriously. There’s been some humor to be had in more recent fare such as “Wonder Woman” and the even lighter “Spiderman: Homecoming” but nothing like what we get in “Thor- Ragnarok”. Hardcore fans may feel the jocular tone is an insult to the characters but somehow it feels right in this case.

We find Thor (Chris Hemsworth) suspended in a cage in some hellish cave speaking to someone catching us up on his present predicament. Turns out the ‘someone’ is the skeleton of some previous prisoner in the same cage, hardly reassuring. What follows however is an almost non-stop action/adventure tale with continuous laughs that I thoroughly enjoyed. Asgard is in trouble, Odin’s dead, Thor’s estranged sister Hela (Cate Blanchett) the goddess of death has come to claim the throne and she’s a force to be reckoned with. Thor escapes his cage only to return home to find half-brother Loki (Tom Hiddleston) masquerading as Odin (Anthony Hopkins) and enjoying life but is soon on the run from his power hungry and formidable sister. He ends up captured again by an entertainment impresario of sorts; The Grandmaster (Jeff Goldblum) who stages gladiatorial combat for the masses (like WWE on a more primitive and lethal scale). His champion fighter is none other than the MIA Hulk/Bruce Banner (Mark Ruffalo) and the two have a rocky reunion. We also have on hand Valkyrie (Tessa Thompson, a long way from her ‘Veronica Mars’ days) as a reluctant ally. There’s a bunch of ‘other realm’ and Asgardian mumbo jumbo but it all works if you just relax and let the story carry you along.

Awesome battle sequences and a rocking soundtrack make this the best of the Thor trilogy. So, if you want a break from some of the doom and gloom that often drags down this genre then “Thor- Rangarok” is definitely for you.
19 people found this helpful

DKReviewed in the United States on May 6, 2018
5.0 out of 5 stars
Best 3D on Region Free Disc
Verified purchase
This is a Region Free Blu-ray 3D disc. And the 3D is one of the best 3D home presentations that has been out there. The film is terrific. Best of the three Thor movies. The comedy and music in this is brilliant. The visuals just pop out at you. The film also goes from letterbox to full screen when certain scenes were shot in the IMAX format. Get this 3D disc if you can. It's a shame that the U.S. have abandoned the 3D format for most of the films out there. Thank you Amazon for having this on sale for us 3D enthusiasts!!!! One thing though...myself and some other buyers did not receive a slipcover. No biggie to me but beware if you do. Really great 3D!!!!!!
23 people found this helpful

eltramReviewed in the United States on November 26, 2018
2.0 out of 5 stars
Misleading Amazon Bonus Features
Verified purchase
The movie is great. This review is how Amazon handles it's "bonus features." Unlike Itunes, which incorporates a menu system, Amazon throws them all in at the end, making you have to "fast forward" through them. There's also no audio commentary. For a company like Amazon to have such a lazy interface is a real disappointment.
20 people found this helpful

A. SharpReviewed in the United States on February 23, 2018
5.0 out of 5 stars
One of the Best Movies in the MCU!
Verified purchase
This is the BEST of the Thor movies. It's got action and humor and has a slick look and a pretty keen soundtrack. Performances are spot on. I highly recommend it and would be a welcome addition to your MCU movie collection. Enjoy.
66 people found this helpful

B. KaneReviewed in the United States on July 14, 2018
5.0 out of 5 stars
Great entertainment and the disc plays great in my 3D player
Verified purchase
Even though I had the digital product of this movie I really wanted to see it in 3D. Unfortunately Disney has quit releasing 3D discs in the US so I had to wait months later for the UK to produce the 3D. It plays beautifully in my 3D player and I'm very happy with my purchase. Arrived in time promised. As for the movie it is outstanding and Chris Hemsworth is awesome as Thor. Thor is by for my favorite hero of the Marvel Universe and this movie is a tribute to the original Stan Lee and Jack Kirby vision of Thor. Fans of the comic books will be thrilled with the story and the interaction between Thor and Hulk is awesome.
9 people found this helpful
See all reviews
Back to top
Get to Know Us
Make Money with Us
Amazon Payment Products
Let Us Help You
EnglishChoose a language for shopping. United StatesChoose a country/region for shopping.
© 1996-2022, Amazon.com, Inc. or its affiliates