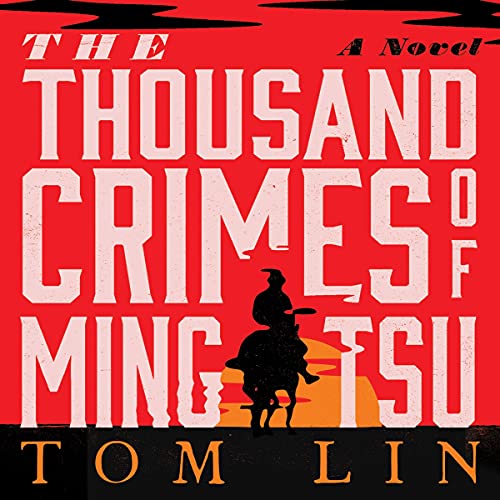 The Thousand Crimes of Ming Tsu

A Finalist for the 2022 Carnegie Medal for Excellence

An astounding debut that reimagines the classic Western through the eyes of a Chinese American assassin on a quest to rescue his kidnapped wife and exact his revenge on her abductors, and “declares the arrival of an astonishing new voice” (Jonathan Lethem).

Orphaned young, Ming Tsu, the son of Chinese immigrants, is raised by the notorious leader of a California crime syndicate, who trains him to be his deadly enforcer. But when Ming falls in love with Ada, the daughter of a powerful railroad magnate, and the two elope, he seizes the opportunity to escape to a different life. Soon after, in a violent raid, the tycoon’s henchmen kidnap Ada and conscript Ming into service for the Central Pacific Railroad.

Battered, heartbroken, and yet defiant, Ming partners with a blind clairvoyant known only as the prophet. Together the two set out to rescue his wife and to exact revenge on the men who destroyed Ming, aided by a troupe of magic-show performers, some with supernatural powers, whom they meet on the journey. Ming blazes his way across the West, settling old scores with a single-minded devotion that culminates in an explosive and unexpected finale.

Written with the violent ardor of Cormac McCarthy and the otherworldly inventiveness of Ted Chiang, The Thousand Crimes of Ming Tsu is at once a thriller, a romance, and a story of one man’s quest for redemption in the face of a distinctly American brutality.

"In Tom Lin’s novel, the atmosphere of Cormac McCarthy’s West, or that of the Coen Brothers’ True Grit, gives way to the phantasmagorical shades of Ray Bradbury, Charles Finney’s The Circus of Dr. Lao, and Katherine Dunn’s Geek Love. Yet The Thousand Crimes of Ming Tsu has a velocity and perspective all its own, and is a fierce new version of the Westward Dream." (Jonathan Lethem, author of Motherless Brooklyn)

Special invitation from Audible!
Learn more about Membership
List Price: $29.65
You Save: $3.71 (13%)
By completing your purchase, you agree to Audible’s Conditions Of Use
Sold and delivered by Audible, an Amazon company
Share

4.2 out of 5 stars
4.2 out of 5
543 global ratings
How are ratings calculated?
To calculate the overall star rating and percentage breakdown by star, we don’t use a simple average. Instead, our system considers things like how recent a review is and if the reviewer bought the item on Amazon. It also analyzes reviews to verify trustworthiness.
Top reviews

John K. Mainieri
4.0 out of 5 stars Like Nothing I’ve Ever Read
Reviewed in the United States on June 5, 2021
Verified Purchase
It’s a strangely satisfying read, a blend of the Old West, sheriffs, shootouts, but most of all, murder. At times mystical, often soulfully spiritual, it’s a hell of a story and almost like reading a fantasy novel. However, I don’t read fantasy. This a new and thrilling new genre.
Read more
18 people found this helpful
Helpful
Report abuse

Larry Patten
5.0 out of 5 stars Cruel and Beautiful
Reviewed in the United States on July 14, 2021
Verified Purchase
What a grim, beautiful work Lin created. I finished the book a couple of days ago and it still troubles me. How could I get so attached to the cruel, brutal Ming Tsu? Why did he, in grace-filled moments, come across as such a caring person? This is a western with all the tropes: harsh landscapes, villains with murderous intent, galloping horses, and a potential damsel in distress. It is also a remarkable revisionist western, taking the reader into the unseen, ignored side of the mythology. Lin's language is sublime. His vivid descriptions honor the glorious sweeping vistas while pulling no punches in the last, bloody gasps of Ming Tsu's victims.

Saddle up. Keep your eyes peeled. Make sure your powder is dry. Even troubled by the cruelty, I'm glad I took the ride.
Read more
9 people found this helpful
Helpful
Report abuse

A. Warren
4.0 out of 5 stars Half Exciting, Half Boring
Reviewed in the United States on June 11, 2021
Verified Purchase
I read the previous positive reviews quickly and immediately bought it. In the early going it was interesting because the main character Ming was meeting some strange folk who performed miracles ( magical realism at its best) and was definitely out to kill a number of his enemies. However, things got really boring between killings (though they were exciting themselves) because the author spent a lot of time explaining the surroundings, dusty, cold, river running rapidly, etc. as he traveled between killings. It almost seemed like it was a
"filler" to make the book longer; okay I know the West is dusty but Geezz. Anyway, I enjoy westerns very much (a real Larry McMurtry fan) but this one was a big disappointment.
Read more
10 people found this helpful
Helpful
Report abuse

jean p
5.0 out of 5 stars Great western
Reviewed in the United States on June 9, 2021
Verified Purchase
I love me a good western, and this is a great western. I loved every minute, even the really gory ones! I like to imagine this is what it was really like to settle the West, where I live……treacherous, dry, full of scheming bad guys and gals. The magical realism is treat, too, because how else would our forebears survived out here? I’d highly recommend this for the western-magical realism-curious.
Read more
8 people found this helpful
Helpful
Report abuse

R & J
1.0 out of 5 stars Sorry to say this is not a good book
Reviewed in the United States on July 18, 2021
Verified Purchase
I am always pleased for a new author to be published and make it to the mainstream. However, I do not see how this book made it to the public or why some people like it. The story is mostly drawn out and somewhat boring. Nothing cleaver or interesting aside from some nonsensical fantasy characters that don't pull any parts of the story together. Mostly though, the gratuitous senseless violence is rather revolting, unimaginative, and absolutely useless. I slogged through to the end to see if there was something that would make sense of the otherwise endless story but sadly that never happens. I feel like I completely wasted my money and rather embarrassed to have spent my time hoping for some redeeming conclusion only to be left flat.
Read more
4 people found this helpful
Helpful
Report abuse

Amazon Customer
2.0 out of 5 stars Worst book ever
Reviewed in the United States on June 5, 2021
Verified Purchase
I cannot believe I was enticed by the hype for a book this bad. The only thing that kept me reading is I thought it could only get better. Didn’t happen
Read more
8 people found this helpful
Helpful
Report abuse

robert werner
3.0 out of 5 stars Ok…not too great
Reviewed in the United States on June 14, 2021
Verified Purchase
Got comparisons to Carnac M … not valid. Also said broke stereotypes of Chinese in the west…literally all a bunch of stereotypes from the blind magic Chinese dude to the sort of ninja murderer. Light reading but really violent.
Read more
8 people found this helpful
Helpful
Report abuse

Kindle Customer
2.0 out of 5 stars Send coffee, quick
Reviewed in the United States on June 30, 2021
Verified Purchase
Got put to sleep with one scene after another when a blind man ran down stairs, found and saddled his horse and was ready to go...and go and go and go . A body simply cannot walk for days on end across the desert without food or water without feeling somewhat poorly, never mind wiping out half the population of a town in a fit of pique.
Read more
4 people found this helpful
Helpful
Report abuse
See all reviews
Back to top
Get to Know Us
Make Money with Us
Amazon Payment Products
Let Us Help You
EnglishChoose a language for shopping. United StatesChoose a country/region for shopping.
© 1996-2022, Amazon.com, Inc. or its affiliates