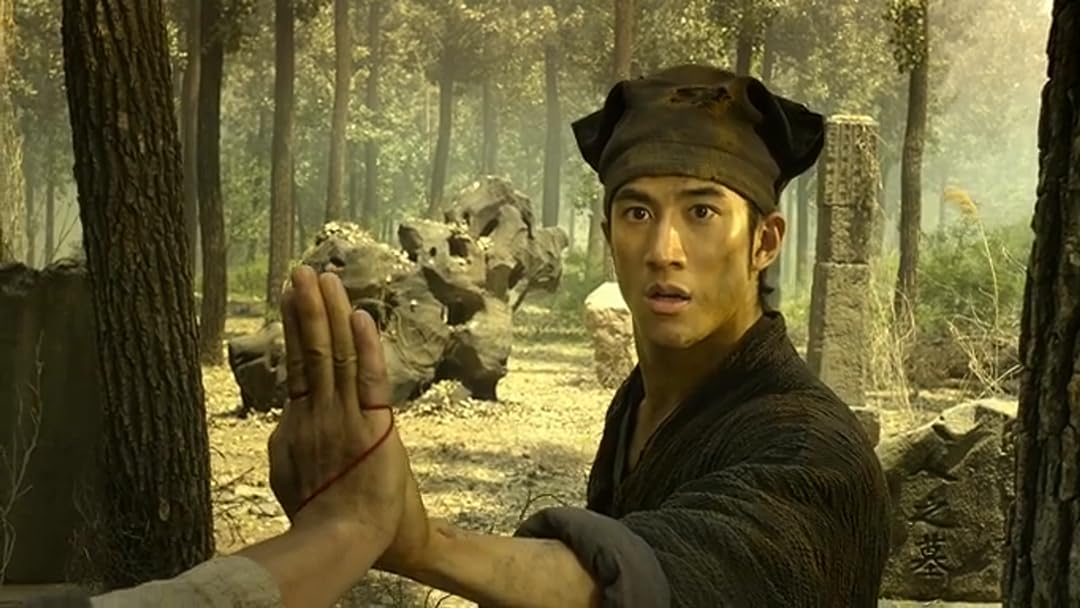 The Thousand Faces of Dunjia

(332)
5.41 h 52 min20177+
In this martial arts action-packed journey, when an ancient creature with the power to destroy the world arises, a naive young constable discovers a secret society with supernatural abilities.

Avid ReaderReviewed in the United States on June 6, 2021
5.0 out of 5 stars
Worth Watching!
Verified purchase
Although action/fantasy is not my preferred movie genre, I watched The Thousand Faces of Dunjia, because it was a short movie and starred Ni Ni. I’m relatively new to Asian movie/TV/theater, and now I have a strong preference for Chinese Costume Dramas…particularly historic, period, palace. However, TTFOD did it for me! Absolutely loved the comedy, tinged with elements of potential romance. The cinematography was good…but again, not necessarily what’s going to keep me viewing this genre of movie.

I’ve seen Ni Ni in Rise of the Phoenixes and Love & Destiny and believe she is a solidly skilled actress with the ability to perform diverse roles. I haven’t seen much of her work, but what I’ve seen so far, tells me she’s got staying power in the acting/entertainment industry. Also, I recently saw Zhou Dongyu in The Palace and believe she too has the skills. This was a well-packaged cast and storyline, and I could see that it could be a series…particularly if fans for this type of genre “demand” more.

While I prefer TV CCDs with many episodes, TTFOD is an entertaining “short” movie worth watching…very good for a movie night!

Andrew "Big Ugly' HaleReviewed in the United States on February 18, 2021
3.0 out of 5 stars
Creative. Whacky.
Verified purchase
Told in chapters, this is the story of an ancient clan protecting the world from alien creatures. Qimen and Dunjia are basically the vessel and the life force that can make or break the battle lines. Dunjia will basically give super powers to those injured greviously. By chapter 6, things get cosmicly crazy.

The effects were cool and the story was creative but at some points it tended to become whacky with its heavy lean towards a vintage 80s movie. It was enjoyable and maybe intentional but a little hard to follow at some points.

Red Eye from the sky and White Tiger from the earth are intriguing creature designs but they set us up for a future installment where our Dunjia clan must find their spiritual lord who is probably bigger and badder.

One thing I did not like was Nose Hair, the gender-swapping, body-morphing prostitute. We're kinda lead to believe that one man and one woman from the clan have used his/her services. Bleh.

BeaulahReviewed in the United States on May 10, 2021
5.0 out of 5 stars
FIVE STARS - A Stellar Storyteller & Translator of Mythology
Verified purchase
I saw my first Tsui Hark film 37-years ago at a little art theater on University, below UCBerkeley. He is a genre breaker, a first class cinematographer, an epic dreamer and one of the Top Ten Filmmakers from Asia (and also Hollywood. I cut my teeth on the legends and various mythologies of China & Taiwan so I enjoyed this new tale.

This perhaps has more comedy than his earlier films which were dramas, action adventure, legendary-based & classic.

You can not watch a legendary storyteller & it's directed this time by one of the top 3 directors to ever been born in Asia Yuen Woo Ping.

Yuen & Tsui - only a fool wouldn't enjoy this!
3 people found this helpful

Mr. RadicalReviewed in the United States on May 26, 2021
2.0 out of 5 stars
Men in Black wannabe
Verified purchase
this is clearly a Men in Black wannabe. Shape shifters, aliens, blah blah blah. EVERYTHING is CG, even objects that could have easily been practical effects. Everything is a poor cartoony CG floating thingie. There are two creatures that look like ultra generic video game CG creatures. Just not good. The story is about as ultra generic as it gets and boils down to: really lame CG creatures are running around--now fight them. There are several scenes, like MIB, where the lead character makes everyone forget what they saw. But instead of a light flash, like in MIB, they use these little CG butterflies that fly into the eyes of people to make them forget. ??? Dumb and lame looking. This is a pretty typical modern chinese movie doing a poor imitation of an american fun blockbuster.
3 people found this helpful

NemoReviewed in the United States on October 30, 2018
5.0 out of 5 stars
Creative fun! Lots of action! Buy it!
Verified purchase
The Thousand Faces of Dunjia is one of the best fantasy/action films I've seen in years. I really liked the lead actress who acts just like a man in some scenes, which makes the film very refreshing as she is a very complex and interesting character. Great action scenes and quite a few laughs are thrown in for relief. I highly recommend this film!
12 people found this helpful

Great Tutu KonaReviewed in the United States on January 11, 2021
1.0 out of 5 stars
This is just garbage. This is just garbage.
Verified purchase
The Chinese people have many talents, and they have a rich history to draw upon, yet they continue to use CG and all that crap instead of real artists to pump out this trash. Entertaining? No. Amazing? No. Art? No. It's just like all the other sub quality trash they ship over to America. Landfill, yes. Why?
When I watched the Detective Dee series, they were enchanting! Beautifully done. It's not that they are not capable, they are just greedy. Stop.
4 people found this helpful

AaronReviewed in the United States on April 27, 2019
4.0 out of 5 stars
Weird but entertaining
Verified purchase
Was enjoyable. Plenty of funny moments...nice special effects for the battle scenes. Although the monster battles seemed to live too far outside the confines of the film. To put it simply...was weird at times. U will know what i mean when u watch this. But outside of that was a good movie..not quite what i was epecting but kept me entertained. Good product. Disc played great with no issues. Audio and picture were excellent and subs were good as well.
7 people found this helpful

sjaantze42Reviewed in the United States on February 11, 2021
5.0 out of 5 stars
Loved it! Fun action, even if the CGI aliens looked like they were from a video game.
Verified purchase
I've seen a lot of Wuxia style films, and this is definitely in the grand tradition of Martial Arts fantasy. While the CGI bits were a bit difficult to watch at first, the rest of the movie more than made up for it. Please, do yourself a huge favor, and stick with it. Sometimes, the plots can get lost in these films, due to translation and cultural issues, but this one managed to keep it together. A great cast, some truly spectacular moments during the fight scenes, and a ton of laughs. I truly hope that they will let us have a sequel. This is bound to draw a huge cult following, if the series keeps going.
See all reviews
Back to top
Get to Know Us
Make Money with Us
Amazon Payment Products
Let Us Help You
EnglishChoose a language for shopping. United StatesChoose a country/region for shopping.
© 1996-2022, Amazon.com, Inc. or its affiliates