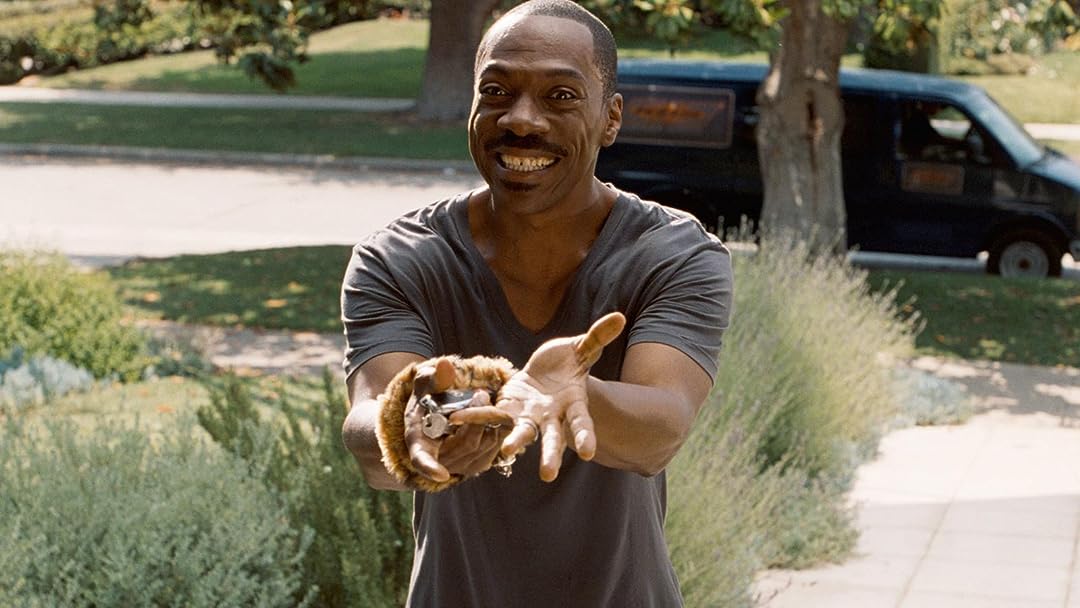 (1,070)
5.81 h 31 min2012X-RayPG-13
A fast-talking literary agent (Eddie Murphy) must learn how to live without speech upon discovering that he has only a thousand words left to say before he dies.

Carmen L.Reviewed in the United States on May 27, 2022
4.0 out of 5 stars
Too much sexual ickiness but an otherwise interesting story
Verified purchase
So there was far too much sexual humor, talks, and situations for my taste in this movie. I was grossed out and put off by all that yucky stuff.

I did like him talking to his inner child a lot, figuring out forgiveness, allowing himself to understand the people around him better and show compassion. I am glad that he did not die in the end after all and that he did live and was able to build better future relationships.

I also noticed how aggressive he was towards nature in general and how he became kinder to nature over the course of the movie. I thought that if we actually could feel in our own bodies all the terrible things we do to nature, then we'd be a lot more caring to trees and would not poison nature or chop at it or try to hurt it all the time. People with empathy already feel this way, to a certain extent, and people with asthma also get sick from pesticides.

AngelaReviewed in the United States on January 14, 2022
5.0 out of 5 stars
It was beautiful
Verified purchase
It was truly beautiful, a movie to remind you that words have power and their best spent on the most important things in life.
One person found this helpful

OrumusReviewed in the United States on May 18, 2022
5.0 out of 5 stars
This was a feel good movie.
Verified purchase
We live in a fast world and many of us live fast but don't enjoy life. Jack is forced to slow down. In so doing he learns about his true self and confronts the real things holding him back.

Linda H. DavisReviewed in the United States on November 29, 2013
5.0 out of 5 stars
Stunningly beautiful and important
Verified purchase
This modest, powerful film tells how the art program at Ohio's Bittersweet Farms-- the country's oldest farmstead community for adults with autism-- has tapped hidden talents in the residents, and given them a voice through art. People unable to explain themselves have been liberated. Art has offered a window into their psyches, allowing staff to understand what's troubling the people they serve, and to see, for the first time, who they essentially are.

In the documentary style perfected by Ken Burns, the story is told with the help of interviews with Bittersweet staff. Apt quotations about the value of art from such luminaries as John Updike and Freida Kahlo frame each individual story within the larger tale. Focusing on five longtime residents-- "The Historian," "The Illustrator," and so on-- this professionally made film, produced and directed by Cora and Richard Walsh, the mother and brother of one of the subjects, is beautiful and deeply moving. And it seems utterly fresh.

In the Bittersweet art studios we meet Joe, "The Historian," who draws his life from memory, always through the perspective through which he first saw something-- a bus, for instance, viewed from a window above. Through art Joe ultimately revealed a childhood trauma: his near-drowning at Lake Erie. (Joe's painting of the accident is childlike, haunting, and devastating.) Bronwen, "The Storyteller," expressed her grief about the death of her father through a series of landscapes that at first seemed innocent. Canvas after canvas showed green grass and blue sky. Then one day a brown swathe punctured the serene landscape, plunging deeply below the grass. Above the earth, in primitive handwriting, were the words "Daddy Dirts."

Again and again, the art studio becomes a sanctuary, a therapist's chair. We learn that Conor, "The Illustrator," and the filmmakers' family member, worked through a period of anxiety when his mother was in Ireland. Staff understood the change in his behavior when he began drawing a series of terrified-looking portraits of his mother. Steve, "The Recluse," found safety in a corner of the art room after a cancer battle. And Patra, "The Realist," created a whimsical series of critters that have become the basis for some ceramic designs made and sold at the farm. As Patra's talent emerged, her longtime temper tantrums subsided. She gave her critters a home and named it Twitter Forest, a place, like Bittersweet, where beings live protected from the dangers of the outside world.

Though the film dwells on how adults with autism have expressed their suffering through art, it also shows the inner joys that have been released in the art studios-- through drawing, painting, ceramics, and weaving. Much of the work produced at Bittersweet is gallery-worthy and stunning.

This is an important film. The shame is that it has not been shown in wide release--or on PBS. At a time when adults with autism are entering the adult world-- and a society unprepared to serve their needs-- in greater numbers each year, art is something that works. It is meaningful. It can even help autistic adults earn money through the sale of their work. And you don't necessarily need a farm-based program, big grant funding, or professional artists to achieve the miracle being played out on this Ohio farm. But you do need to listen to what "A Thousand Words" is telling you--whether you have an autistic family member or not.

Amber CzerwinskiReviewed in the United States on May 17, 2022
4.0 out of 5 stars
great movie
Verified purchase
I really enjoyed this movie. You have the classic funny Eddie Murphy with a good plot. Can't go wrong with this one.
One person found this helpful

M. EdwardsReviewed in the United States on September 6, 2012
3.0 out of 5 stars
Typical "Cutesy" Eddy Murphy flick.
Verified purchase
I like Eddie Murphy movies, so I enjoyed this film. It's definitely not his best, but it's entertaining. It is worth watching, but not Oscar worthy material by any means. I enjoyed watching it once, but it is not one I would want to watch a second time like Beverly Hills Cop (actually I've seen that one several times!) Eddie has kinda lost a lot of the edginess he used to have in the 80's and 90's and that is what made him Eddie Murphy and me love his films. This movie had it's "moments" and I enjoyed it on a dead summer night whilst the reality shows plagued us.
2 people found this helpful

Foreign Chat WebReviewed in the United States on February 9, 2015
4.0 out of 5 stars
Limit His Words Or Else...
Verified purchase
The movie was good. I hate that there was no special features included in the Blu-ray disc.

In this movie, Eddie Murphy played a character who had to limit the words he speak or else he would die based on the tree in his backyard.

There was some parts of the movie I did not like. One of them, of course, was the awkwardness when he had to go to a meeting with some associates/employees. However, I did like the parts when he went to a cafe and told the cashier (Jack McBrayer) what he wanted nonverbally.
One person found this helpful
See all reviews
Back to top
Get to Know Us
Make Money with Us
Amazon Payment Products
Let Us Help You
EnglishChoose a language for shopping. United StatesChoose a country/region for shopping.
© 1996-2022, Amazon.com, Inc. or its affiliates