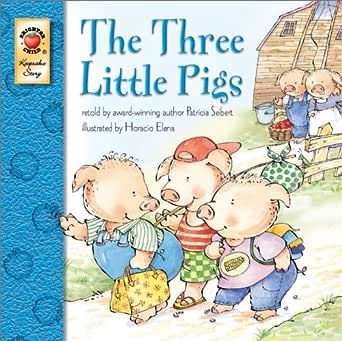 You've subscribed to Keepsake Stories! We will preorder your items within 24 hours of when they become available. When new books are released, we'll charge your default payment method for the lowest price available during the pre-order period.
Update your device or payment method, cancel individual pre-orders or your subscription at
Your Memberships & Subscriptions
There was an error. We were unable to process your subscription due to an error. Please refresh and try again. 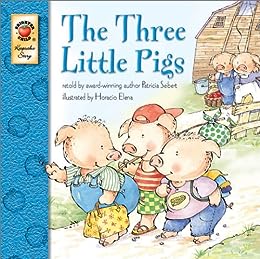 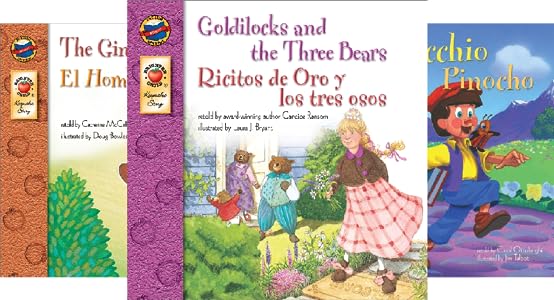 Each little pig is confident that his house is the strongest. But the real question is, whose will survive the big bad wolf?Beautifully illustrated, this classic tale will capture children's interest and spark their imagination page after page, encouraging a love of reading that is vital to success in school and life. --This text refers to the paperback edition.

Patricia Seibert has written nonfiction and fiction for children. Her nonfiction books have received critical acclaim and have been recognized by the Junior Library Guild, the National Council for Social Studies, The Children's Book Council and the National Science Teachers Association. She currently lives in Ohio with her husband.
--This text refers to the paperback edition.

4.7 out of 5 stars
4.7 out of 5
1,889 global ratings
How are ratings calculated?
To calculate the overall star rating and percentage breakdown by star, we don’t use a simple average. Instead, our system considers things like how recent a review is and if the reviewer bought the item on Amazon. It also analyzes reviews to verify trustworthiness.

sashkello
2.0 out of 5 stars Misses the point of the story...
Reviewed in the United States on September 25, 2019
Verified Purchase
Bought this one for illustrations which I really liked. They are well drawn and relevant, no qualms with that whatsoever!

Now, the text, on the other hand, I didn't like at all. First of all, the flow of the story doesn't feel right to me, it just doesn't roll off the tongue as it should.
But more importantly, this version makes some questionable decisions which alter the intended message (at least compared to what I remember from my childhood).

The main point of the story is that the piggy who quickly builds his house out of straw to have more time to play around is the laziest, while the one who uses bricks is hard-working, and the latter gets reward for his hard work and wit at the end. Here this point is very unclear. The first piggy starts building his straw house while the other two are just observing, and the brick house piggy starts last. The whole idea is that the first one is in too much hurry to finish and play, while the last one spends lots of time working instead of playing. It's not about "look, this piggy is smarter", it's about hard work. I've heard versions where they start together, but first two are already playing while the last one is still finishing his brick house, or another one where the brick house pig starts early while the last pig plays around and enjoys the last days of summer, only to build his straw house at the last moment. Both of these would work and have the same idea, which the author misunderstands completely...

In addition to that, some other weird decisions with the story direction were made.
As far as I remember, the wolf would use one breath for the straw house, two for the stick house, and would fail with three on the brick house. This shows that every next one requires more effort. Here it feels like the first two are equally easy for him and he just immediately gives up with the brick house...
Also, when the wolf decides to go down the chimney the pigs "guessed what he's going to do" and start the fire. Doesn't make sense - if they start fire, there would be smoke and the wolf won't go down the chimney. The reasonable progression of the story would be if he started to go down, they saw the soot falling into the fireplace or maybe heard him walking on the roof, and then started it up before he reached the bottom.
Neither of these are a big deal, but... these annoying little things add up and spoil the overall impression.
Read more
11 people found this helpful
Helpful
Report abuse

Customer
5.0 out of 5 stars A nice safe version.
Reviewed in the United States on August 28, 2017
Verified Purchase
It is not the Three Little Pigs story that I remember, but given the versions I found online...it is one of the less violent/horrific/sad versions. I don't know where my daughter heard about the three little pigs, I don't recall us telling it to her, but she wanted it read at bed time. We went online to thinking it was a classic children's fairy tale, and having forgotten the ending to the little matchstick girl, or that other version of the three bears, well I ended up here. The artwork is good, the story is basically the bland version I remember, and the little one likes it. What more is needed.
Read more
17 people found this helpful
Helpful
Report abuse

Devi Chettiar
5.0 out of 5 stars full story but very kid friendly
Reviewed in the United States on February 15, 2019
Verified Purchase
My 3 y/o daughter makes us read this story to her nightly as they learned about the story at daycare and now she's obsessed. This version is perfect! It's the full general story with a happy ending and a non-scary wolf. Nice colorful pictures. I'd say it's perfect for a 3/4 year old!
Read more
5 people found this helpful
Helpful
Report abuse

MarQuette Mason
5.0 out of 5 stars A Classic
Reviewed in the United States on December 6, 2020
Verified Purchase
I actually bought this because my 8 year old niece has never heard the story of the 3 little pigs. I also bought "The True Story of the 3 Little Pigs" by Jon Scieszka, such a funny version.
I wanted to tell this story to my niece but felt I should tell her the Original first. While searching for these books I also ran across "The Story of the Three Little Wolves and the Big Bad Pig" by Eugene Trivizas, which I've never heard of, so I bought all 3.

"The True Story of the 3 Little Pigs" by Jon Scieszka is by far my Favorite!!! 📚
Read more
One person found this helpful
Helpful
Report abuse

Dolce Viognier
1.0 out of 5 stars Not the right story.
Reviewed in the United States on July 5, 2020
Verified Purchase
Not the original version. A much tamer version, and completely rewritten. Doesn’t even mention about doing some thing well, and the pigs run to each other’s houses. I was told the stories as a kid and it was fine, I don’t see why it Has to be so bad that the wolf ate the pigs. I don’t agree with making it so all the pigs live happily ever after. I guess I have to be more careful in choosing the right version going forward.
Read more
One person found this helpful
Helpful
Report abuse

SciArt
2.0 out of 5 stars The pages were "tear-out" pages
Reviewed in the United States on November 25, 2020
Verified Purchase
The illustrations in this book are cute. The story is okay. It's wordier than the bare bones of the original, but it doesn't add a lot. Your kids probably won't care, but if you have to read it repeatedly, you might. That's not a big deal, but the reason I'm giving two stars is because all of the pages are perforated vertically, like you're supposed to tear them out! This will last .0000001 seconds in this house with two kids. Those pages will all be ripped out immediately. I think it was a mistake that it was printed this way...
Read more
Helpful
Report abuse

Librarian Carol Hale
4.0 out of 5 stars .
Reviewed in the United States on July 24, 2017
Verified Purchase
Classic tale of how slow, careful, and thoughtful hard work pays off in the end, so much more so than unplanned, quick and easy action. Not much new in this version, except that the brothers are very close to one another.
Read more
5 people found this helpful
Helpful
Report abuse

Judith A.
5.0 out of 5 stars Good version of a favorite story
Reviewed in the United States on December 25, 2016
Verified Purchase
Nice retelling perfect for a 2 year old . There are just the right amount of words here. Love the fate of the Big Bad Wolf who runs off with his tale ablaze.
Read more
9 people found this helpful
Helpful
Report abuse
See all reviews

Dem4
5.0 out of 5 stars Love the story
Reviewed in the United Kingdom on January 12, 2021
Verified Purchase
It’s a lovely story. My 3 year old had been covering it at preschool and kept reciting it so we purchased a copy for at home. We’ve read it countless times and she still enjoys it. I know other reviews say the ending has changed, but I honestly couldn’t remember what the original ending was so it didn’t cause an issue for us.
Read more
2 people found this helpful
Report abuse

kerry sutton
2.0 out of 5 stars Bad quality pages.
Reviewed in the United Kingdom on February 23, 2021
Verified Purchase
Lovely book but its not going to last long.
Every single page has the dotted lines down it.
Like something u would see in magazines to rip the picture out neatly.
So I can see eventually when it starts to wear it will rip neatly down the line.
Brought this for my 4 year old sons home work in which he enjoyed.
Page 3 does not make sense at all "on many a sunny day".
Also the houses that were made out off straw and sticks, when they got blown in it turned to paper with sticks and straw on it.
Read more

2.0 out of 5 stars Bad quality pages.
Reviewed in the United Kingdom on February 23, 2021
Lovely book but its not going to last long.
Every single page has the dotted lines down it.
Like something u would see in magazines to rip the picture out neatly.
So I can see eventually when it starts to wear it will rip neatly down the line.
Brought this for my 4 year old sons home work in which he enjoyed.
Page 3 does not make sense at all "on many a sunny day".
Also the houses that were made out off straw and sticks, when they got blown in it turned to paper with sticks and straw on it.

Nannyto7
5.0 out of 5 stars Three little piggies and big bad wolf
Reviewed in the United Kingdom on July 1, 2020
Verified Purchase
My Great Grandson is a huge fan of the three little pigs. He loves the book, the story and has the finger puppets too. He makes up his own stories and ‘reads’ the book himself by the pictures. Lovely old children’s story.
Read more
One person found this helpful
Report abuse

shirley
5.0 out of 5 stars Storybook 3 little pigs
Reviewed in the United Kingdom on February 21, 2021
Verified Purchase
Bought for children at nursery who have loved the story very simple version with a good ending. Good manageable sized book for smaller children too
Read more
One person found this helpful
Report abuse