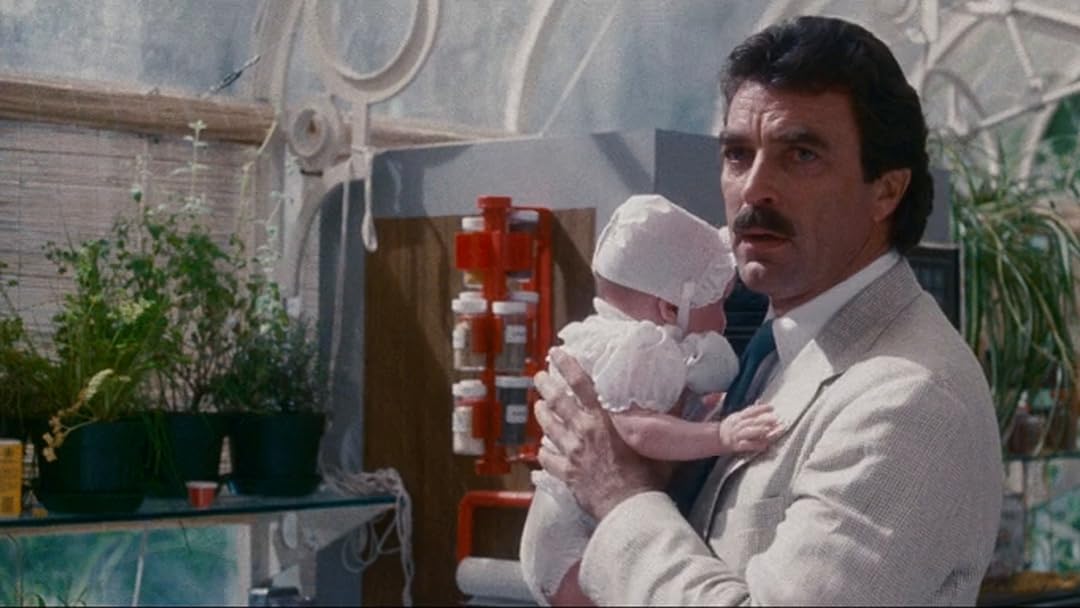 Three Men And A Baby

Dr. PaulReviewed in the United States on December 8, 2020
5.0 out of 5 stars
A classic that still stands strong
Verified purchase
Who didn't fall in love with these 3 guys and baby Mary? Three Men and a Baby were so great as a family they went on to make one of those very rare sequels that's as good (or maybe even better). This film is pure 80s (clothing, hair, music, life), but for those of us who loved that decade, it's like going home. And if you don't remember it... come visit and have some of the fun we had back then.

The cast is at it's most charming. Tom Selleck, Steve Guttonberg, and Ted Danson were known, but Three Men took them to another level. And there's a reason why... these guys are fun, charming, but so single guy characters who play all the way - different ladies and lots of parties. But when a new woman shows up in their lives... things go a whole new direction. There is a bit of a goofy B storyline, but it's still a fun way to watch them fall in love.

This is a nice movie for date night, for Saturday afternoon, a wintery day... it's a great film and we're glad to have it in our movie library!

wild oakReviewed in the United States on November 9, 2021
4.0 out of 5 stars
Heartwarming
Verified purchase
It's such a heartwarming movie, on par with another 1987 flick Baby Boom, both of which stories revolve around the unexpected arrival of a baby that soon enough becomes such integral to the life and identity of the protagonists that they are willing to change their adult life for the sake (and love) of the baby. In reality though we know this movie is just fairy tale. The sitcom setup predates Friends, but having not one, or two, but three guys who are willingly trade skirts-chasing with diapers-changing and baby-feeding? It's just not gonna happen. These days, you can't even ply man-child like this from their game console, never mind sitting a baby. I'll bet all my money too, that if there's ever a remake, the three guys would be refashioned as a modern family with three gay guys or some mixture of LGBTQ combo who are more in touch with their feelings and inner-sensitive self. Sometimes though, movies offer great escape into the fantasyland, and 3M+B is an entertaining example of that.

Kollean GouytonReviewed in the United States on June 2, 2019
5.0 out of 5 stars
A+++++ Still Fun!!!
Verified purchase
I remember this from when I was younger. Took me a while to remember the two movies, but when I did I had to hunt them down and buy them outright to add to my collection! Outrageous, fun, and yet sweet! I loved these movies! From a time before movies were full of swear words, sex, and naughty scenes. The first movie starts with 3 bachelors learning to take care of a baby and changing there lives for her... The second movies, she's grown into a young lady, and things in there lives are changing... It's just a fun set of movies with just a hint of drama in both of both of them.
Definitely worth buying them!!!
3 people found this helpful

SlavikReviewed in the United States on November 13, 2021
2.0 out of 5 stars
The baby is definitely the best part of the movie!
Verified purchase
I found everything else lacking. It had "Friends" vibes. Set in NYC, guys in their 30's living as roommates in a high rise apartment together, etc. Plot line was weak and had no moral lessons. The ending was unexpected yet kind of strange. In general, this movie was awkward, boring, annoying, and very unrelateable.
One person found this helpful

CaroleReviewed in the United States on May 11, 2021
5.0 out of 5 stars
Great movie!
Verified purchase
Three confirmed, successful, self- centered men fall in love with an unexpected baby and become super contentious dads. What could be more fun to watch?
Great acting, adorable baby, good plot. Just a nice movie to enjoy over and over.
One person found this helpful

TylerReviewed in the United States on January 24, 2011
5.0 out of 5 stars
This movie is hilarious!
Verified purchase
While watching this movie, I was laughing at every scene. Tom Selleck and Steve Guttenburg are a riot as they first discover the baby sleeping at their door while their third roommate is gone to act in a movie. The first reaction is that Tom Selleck calls Guttenburg over and says, "What is this?"
"It's a baby." Guttenburg says in an innocent tone.
"I know it's a baby." You see Selleck's forced grin. "What's it doing there?"
"It's sleeping."

All three men have their hands full with the baby at first, but then you see that the little baby, Mary, is beginning to grow on them. Selleck and Guttenburg both have dates while seeing a play and their other roommate, the father, is at home with Mary. When they call home at Intermission and don't get an answer, they both rush home, just to see that there was nothing wrong in the first place.

What was really hilarious was how the men had to deal with the heroin problem. In the beginning, they hear that a "package" is to be dropped off at their house, and to keep it until it's to be picked up a few days later. From the beginning, the baby is assumed to be this "package" and they try to pass her off to the heroin dealers when they arrive, just to realize their mistake right before the guys try to drive off with the baby to be put in the car trunk. But the men keep coming back to find their heroin, until the city's finest get involved to take the dealers down.

Mark D. BurghReviewed in the United States on December 1, 2021
3.0 out of 5 stars
Distinctly Mediocre
Verified purchase
This film made a lot of money, including mine back in the day. Doesn't hold up in the least. The idea that men can't raise a baby is, from my own personal experience, wrong, as I have done that myself. The idea of saddling three roues with an infant is dated, forced, and tiresome.

DisneyDenizenReviewed in the United States on August 25, 2019
5.0 out of 5 stars
ONE OF THE FUNNIEST MOVIES EVER MADE
Verified purchase
I introduced my kids to this movie, and they predictably loved it. The concept is simple: three womanizing NYC roommate bachelors unexpectedly find themselves saddled with a baby girl after her mother abandons the infant on their doorstep. What really makes this movie is Tom Selleck, Ted Danson, and Steve Guttenberg.
One person found this helpful
See all reviews
Back to top
Get to Know Us
Make Money with Us
Amazon Payment Products
Let Us Help You
EnglishChoose a language for shopping. United StatesChoose a country/region for shopping.
© 1996-2021, Amazon.com, Inc. or its affiliates