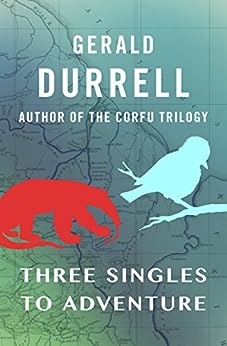 From the Illustrated Biography

Praise for Gerald Durrell
“[Durrell’s] books have an unfailing charm. . . . It is a tribute to his skill that one never tires of his accounts.” —Chicago Tribune

“Animals come close to being Durrell’s best friends. . . . He writes about them with style, verve, and humor.” —Time on The Whispering Land

Gerald Durrell (1925–1995) was a British naturalist, zookeeper, conservationist, author, and television presenter. He is the author of the memoirs My Family and Other Animals; Birds, Beasts and Relatives; A Zoo in My Luggage; The Whispering Lands; and The Garden of the Gods; and more than twenty-five nature books. A student of zoology, he founded the Durrell Wildlife Conservation Trust on the Channel Island of Jersey.

The "Adventure" of this title refers to a settlement in South America, which serves as the starting point for Durrell's excursions into outlying areas. His mission is to bring back live specimens of rare animals, but he also captures a menagerie of humorous tales. With a clipped British accent, Davenport is the ideal storyteller for this self-effacing saga. The listener can picture the explorer, with pith helmet and pipe, regaling his audience with the facts, fun and fears of his expeditions. Even his quarry take on individual personalities as the tales unfold. Filled with interesting facts about the flora and fauna of remote tropical forests, this offering will appeal to fans of nature, yet it entertains with all the qualities of skillfully crafted fiction. Davenport handles both facts and adventures with equal aplomb, capturing the listener with all the cunning of the great explorer himself. B.L.W. (c)AudioFile, Portland, Maine --This text refers to an out of print or unavailable edition of this title.
Read more

4.5 out of 5 stars
4.5 out of 5
32 global ratings
How are ratings calculated?
To calculate the overall star rating and percentage breakdown by star, we don’t use a simple average. Instead, our system considers things like how recent a review is and if the reviewer bought the item on Amazon. It also analyzes reviews to verify trustworthiness.
Top reviews

PSimon
2.0 out of 5 stars Love Durrel but this hasn't aged well
Reviewed in the United States on May 1, 2021
Verified Purchase
Love his Corfu series, but this novel hasn't aged as well... Durrell is still funny but their are whiffs of imperialism, colonialism, and I felt a bit bothered by the cruelty to some of the animals in their capture and transport.
Read more
Helpful
Report abuse

SharkShape
5.0 out of 5 stars Excellent book by the excellent author from excellent era
Reviewed in the United States on December 18, 2020
Verified Purchase
One of the earlier GD's books on his collecting expedition to British Guyana.
Full of wit and unapologetically lacking political correctness.
Just life as it used to be.
Read more
Helpful
Report abuse

AnneRose
5.0 out of 5 stars I laughed a lot and cried a little
Reviewed in the United States on May 2, 2017
Verified Purchase
I love his stories! It's too bad he's dead but at least he left a large, wonderful legacy of stories!
Read more
One person found this helpful
Helpful
Report abuse

Janet Perry
5.0 out of 5 stars A Enchanting View of Animals in a Vanishing World
Reviewed in the United States on February 25, 2017
Between his unconventional upbringing on Corfu (immortalized in books and TV series) and his celebrated career as the founder of the Jersey Wildlife Preservation Trust, Gerald Durrell was a wildlife collector.

In the days before almost all zoo animals were bred in captivity, collectors roamed the wild, getting animals of all kinds for zoos. It was an almost perfect job for someone as crazy about animals and adventurous as Durrell.

This book, newly released as an ebook, is as delightful an introduction to Durrell's writing as I can imagine. It covers a collecting trip to Guiana in South America in 1950. Durrell, his guide, and another Brit, collected animals in four locations around the country,

The book not only tells of their adventures, it gives us pictures of many of the animals and of the country and its people. The author is a wonderful raconteur and his stories are hilarious. You can just picture the absurd events from his descriptions. These he blends with portraits of the animals. Often they emerge as characters in their own right, but equally often, we get basic information about the beastie given in a way that is full of information but not off-putting or overly technical. I've been reading his books since the 1970's and this is. I think, one of his greatest gifts as a writer. You learn so much about creatures you may never have heard of, but in a way that is so fun.

They collect in the capital city, in the jungle, in the plains (savannah), and in an area interlaced with creeks. In each location he gives lovely, almost poetic, word pictures of the land. It's another aspect of his writing that is unusual. Instead of the environmental hand-wringing and brow-beating we find so often today, we see the land through the eyes of someone who loves and respects it while never losing the sense of wonder at its variety and beauty.

It makes for a lovely mental vacation and a great book.
Read more
3 people found this helpful
Helpful
Report abuse

Kathleen W.
5.0 out of 5 stars A Gem from the 1950s for Animal Lovers
Reviewed in the United States on February 21, 2017
The first thing that an animal lover may want to know before reading about adventures of an animal collector is that Gerald Durrell was a dedicated conservationist. The tales in this book are from 1950 when the culture was very different, but Durrell seems a bit ahead of his time. It is clear from his writing that he’s fascinated by the animals and was dedicated to the study of animals for the sake of education and to help all species thrive. These are the tales of his adventures as he collects specimens for zoos. At times the stories are self-deprecating, at times you may feel sorry for the poor confused animals, but he speaks with wonderment, not cruelty or superiority. In fact, I think it’s fair to say that he seems to regard some of his guides and assistants in South America with more inferiority than he has shown toward the animals. He clearly has great respect for the animals and that was important for me to enjoy this book. The photos and description of the author and his life’s work at the end of this book help to calm my concerns about exploitation of the animals, as his mission was to breed and study endangered species, rather than seeing a zoo as a commercial venture.

I really enjoyed reading this on a tablet where I could highlight the name of an animal and instantly bring up a photograph that did not always match what my imagination created from the description. The only problem with this reading method is that it took me longer to finish the book because I was often sidetracked by photos and entertaining videos of the animals as I discovered them. I’m not complaining, the entertainment was well worth the time.

I would like to thank Open Road Integrated Media – not only for granting my request to read an advance copy of this ebook, but for constantly releasing so many great backlisted titles into ebook format. There are so many great books that don’t get the attention they deserve. I appreciate the new ebook releases that have helped me discovered some of the old, buried treasures of the literary world.
Read more
5 people found this helpful
Helpful
Report abuse

Clare O'Beara
5.0 out of 5 stars Three singles to adventure
Reviewed in the United States on July 31, 2017
I had great fun reading this tale of animal collecting in South America. The major types of landscape covered include waterways, dense jungle with orchids and open pampas. Durrell, his work partner Smith and an artist named Bob, went off merrily to get the native people to help them collect animals for zoos and sanctuaries. He had already realised that some animals were in danger of dying out through habitat destruction as the human population exploded.

The many rodents, birds, reptiles and anteaters are described well with a good look at physical and behavioural adaptations. Some of the creatures adapted at once to a basic diet and others were let run around a room where they sat on the men's feet no matter what was happening.

I downloaded an ARC from Net Galley as the Jersey Wildlife Conservation Trust has made these books available again in e-form. This is an unbiased review.
Read more
Helpful
Report abuse
See all reviews

The Collector
5.0 out of 5 stars More fabulous animal collecting stories
Reviewed in the United Kingdom on March 31, 2012
Verified Purchase
Gerald Durrell this time describes his animal collecting trip to Guiana in South America in the 1950's. Wonderfully witty anecdotes of crazy situations and colourful local characters make this an entertaining read. Durrell's particular skill is his ability to give all too human characteristics to the animals he meets, from cunning one-eyed caimans to regally nonnchalant capybara. The only negative to this book is you will be left with the irrisistable urge to read more of Durrell's travel adventures.
Read more
3 people found this helpful
Report abuse

Philip L. Ridd
5.0 out of 5 stars Happiness
Reviewed in the United Kingdom on October 20, 2020
Verified Purchase
It was great to replace the old and defective with the perfect.
Read more
Report abuse

J. R. Palmer
5.0 out of 5 stars collecting animals for zoos in South America in 1950
Reviewed in Canada on December 19, 2019
Verified Purchase
a humorous account of the trials and pleasures of collecting animals and birds for European zoos from the then little known British Guiana. This short book starts properly with acknowledgment that such expeditions depend heavily on local aid for logistics and practical knowledge. The animals are generously characterised, some of the humans are not accorded quite such courtesy. A sense of place is well conveyed, as are the social interactions among the local people including the Indigenous Amerindians. The first of a series of books on zoo collecting, before Durrell had developed fully his special gift for immersing the reader into rarely visited countries and peoples but a foretaste of what was to come.
Read more
Report abuse
See all reviews