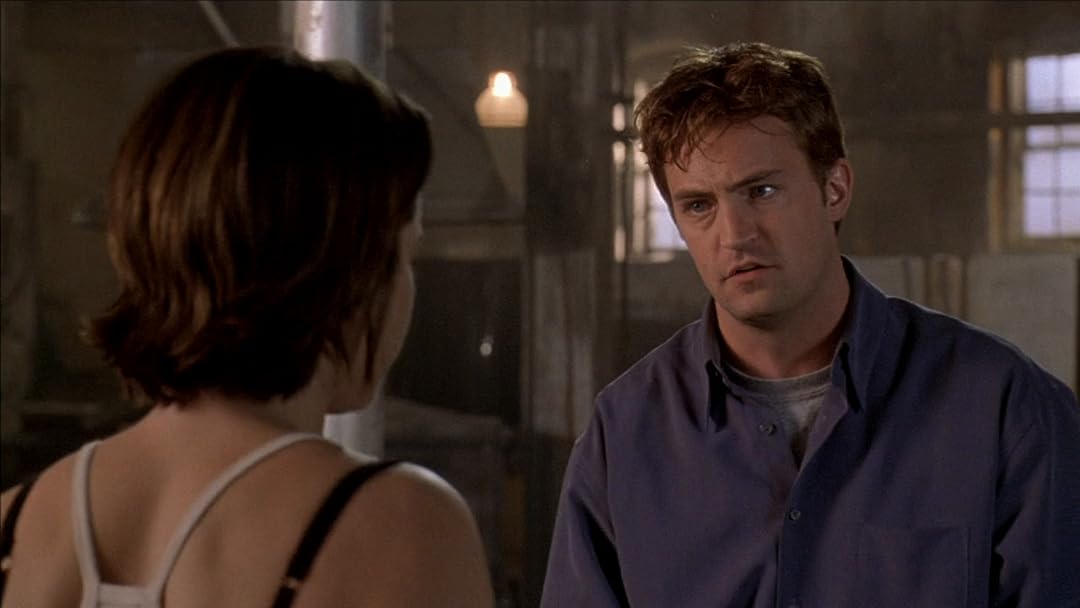 H. BalaReviewed in the United States on September 9, 2006
4.0 out of 5 stars
"You've made a big, gay bed, and you must now slumber gaily in it."
Verified purchase
I consider Three to Tango to be tied with Fools Rush In as the top two Matthew Perry vehicles in his body of work. I wouldn't hesitate to recommend either one. Like Fools Rush In, Three to Tango is a lighthearted, romantic romp, showcasing Perry at his ingratiating best.

Quick premise: A chain of contrived circumstances lead wealthy businessman Charles Newman (Dylan McDermott) to believe that architect Oscar Novak (Matthew Perry) is gay. With the implied promise of a job, Charles convinces Oscar to escort and spy on his "impulsive" and "unpredictable" mistress Amy (Neve Campbell) and keep her away from possible rivals. So, of course, following the formula, Oscar falls in love with Amy, who, in turn, is crushing back on him, until she finds out he's gay. As the movie goes on, Oscar finds it more difficult and frustrating to keep his true feelings hidden from her. It doesn't help that she soon becomes his house guest and that his "outing" becomes media news fodder, shocking his friends and incensing his father. But what it ultimately boils down to for Oscar is that he must choose between his career and the woman he loves.

There aren't really any major surprises here. This premise is certainly not original, going back as far as Three's Company and Victor Victoria in the '70s. Having said that, Three to Tango is still worth a look. The film boasts well-executed comedy sequences, a sweet romance, some fan-friendly acting, some gags about the gay community that wouldn't fly today, and ridiculous chemistry between Perry and Campbell. The humor in the film surfaces from several sources - from Perry and Platt's one liners, from Oscar's football-watching buddies (most notably Rick Gomez, the dimwit of the group), and from Oscar's sitcom-type situation itself.

Perry's Oscar Novak doesn't stray too far from his Chandler Bing roots. In fact, other than the name, Oscar is exactly like Chandler, quirky mannerisms and all, including that nagging suspicion from others that he may play for the other team. But as long as Perry doesn't mine this character type too often, it's not a career ender (matter of fact, for a more serious Matthew Perry role, check out TNT's The Ron Clark Story when it comes out on DVD). And, as Oscar, Perry is consistently charming, witty, and endearing in his fumbling insecurities. My favorite line in the film is uttered by Perry, as he gazes at a portrait of a naked, hirsute heinie adorned with a Bosnian flag: "I had no idea things were so hairy in Bosnia."

Neve Campbell is great here, having opted to drop the angst of her other more dramatic roles. To be honest, I've never seen her in any bad roles. Here, she presents Amy as independent and free-spirited, yet with a vulnerable side. Like most people, she just wants to be loved. Neve Campbell really needs to do more films. God, I love her smile.

McDermott is competent at making us hate him as the callous, self-absorbed, yoga-exercising Charles. Kelly Rowan, as Charles's perceptive wife, doesn't have a lot of screen time yet makes her presence felt in the end. Oliver Platt is terrific as Peter, Oscar's sartorial and very funny gay business partner.

The special features kinda suck. The double-sided disc presents a full screen version on the A side, and widescreen on the B. There's a theatrical trailer and some behind the scenes facts. And that's it.

With Friends having been off the air for some years now, and with the resulting shift away of the spotlight from Matthew Perry, I don't know how many folks now remember this film. For those who haven't seen it and are wondering if it's worth renting or purchasing or even just watching on cable, the answer is a definite yes. Just don't watch it while scarfing a tuna melt.

G RobReviewed in the United States on October 11, 2021
4.0 out of 5 stars
Excellent
Verified purchase
I only gave it a 4-star rating because there is so much fraud on Amazon with people being paid to review products and give 5 ratings. I never take 5 ratings seriously anymore because of this but in all honesty this dvd was awesome and great quality…so it gets an honorary 5.

Ihsan DeebReviewed in the United States on September 1, 2017
5.0 out of 5 stars
Best movie ever!!
Verified purchase
Superb movie!! Nev Campbell is absolutely stunning and the whole cast in the movie is extremely hilarious. I'm so excited I found it on DVD, thanks for a great movie
2 people found this helpful

lattecatReviewed in the United States on December 27, 2020
5.0 out of 5 stars
Laugh out loud comedy
Verified purchase
I loved the characters in this movie and the actors who played them. What a great film.

WinkReviewed in the United States on April 25, 2020
4.0 out of 5 stars
Great Rom Com
Verified purchase
It is a nicely put together movie, with cute story and engaging actors.

Cami LReviewed in the United States on January 14, 2020
5.0 out of 5 stars
Amazing
Verified purchase
Love this movie! Seriously, it's sooo good.
One of those classic 90s movies you have to have in your collection.

BReviewed in the United States on January 10, 2021
5.0 out of 5 stars
Lovely!
Verified purchase
Lovely movie!

Kim WachowiakReviewed in the United States on May 22, 2017
5.0 out of 5 stars
Daughter's gift.
Verified purchase
perfect gift for my daughter thank you.
One person found this helpful
See all reviews
Back to top
Get to Know Us
Make Money with Us
Amazon Payment Products
Let Us Help You
EnglishChoose a language for shopping. United StatesChoose a country/region for shopping.
© 1996-2021, Amazon.com, Inc. or its affiliates