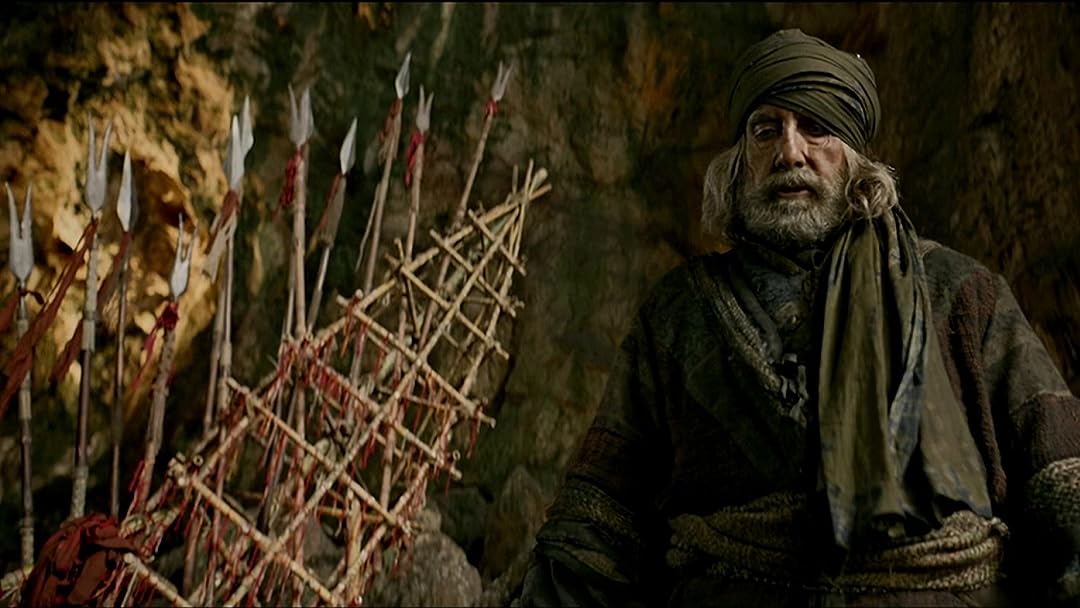 CustmerOnAmazonReviewed in the United States on January 5, 2019
4.0 out of 5 stars
Defiantly not as bad as its theatrical review
Verified purchase
The movie is good. Any causal viewer can watch it with no problem. It is great for kids too. I watched it with a 5 year old and he was hooked to the movie from first scene till the last. Special mention to background music and sound design, it is so good that it made very bad scene too, very engaging.

Once a great showman said that movies are made or destroyed on the editing table. This finely shot movie was also ruined by the editor. Still it is director's responsibility to make sure editor does his/her job. I feel like most of the negative reviews that came out for this movie were because of these reasons as well:
1. Cliche scenes. I mean there are several scenes which are predictable very easily.
2. The legendary Mr. Amitabh doesn't speak in first 45 minutes of the movie. His opening dialogue was dull to death.
3. Very bad choice for contrast of characters. If Aamir is doing comedy and everybody is doing comedy in movie, that doesn't work for a drama movie. Aamir's friend (whoever did it) wasn't able to match the persona of Aamir. This guy also ruined Raees (Shahrukh) for me, in a similar role of Hero's sidekick.
4. Poor graphics. It is not that graphics are bad, but the problem is that this movie relies heavily on the fantasy scenes. Director must have first made a 15 minutes of movie graphics just to test the quality. The ocean looks dull.
5. Poor choice of dresses. It is hot and humid in oceans. The dresses are so heavy that character weren't even acting properly.
6. The dance designer (in professional terms choreographer) should be penalized along with dress designer. Both did pathetically bad job for the amount of money producer put in. They gave worst dance moves to Katrina (along with worst dress). Literally the dance moves were an insult to Katrina's capabilities.

The list can go on and on and on, can invite millions of memes. Ultimately it is director's failure who couldn't take care of small things while making sure he gets all he needs. As soon as he got budget and actors approved, he jumped into directing the movie.

I still give it 4 star because it is still an enjoyable watch. It is not that we've not seen the worst. It is just not as good as viewer would have expected from Aamir khan and Amitabh's combo movie. Again, the story is good, script could have been better, it is execution and side characters that failed this movie.

In all, I don't felt that watched a bad movie as everyone announced it on its day one. It just does not live up to the standards set by Aamir in his last few movies.

Amazon CustomerReviewed in the United States on January 31, 2019
5.0 out of 5 stars
Loved this movie !!!!!!!!!
Verified purchase
People seem to have forgotten that movies are made to take you away from everyday life and forget your troubles and to enjoy yourself for a few hours. This film has met all this and more ! The actors were exceptional, scenery outstanding costumes stunning and music that swept you away ! Thugs of Hindostan had good action , dancing , some serious moments ( when Clive was slaughtering people for no reason ) lots' of anticipation ! It was nice to see the women portrayed as strong and not as sniveling idiots ( like Hollywood movies tend to do ) I found myself cheering at the end (out loud ) when Clive met his death ! All in all an excellent movie !!!!
7 people found this helpful

KumarReviewed in the United States on January 6, 2019
1.0 out of 5 stars
Crap packaged
Verified purchase
Had to give 1 star because there is nothing lower. Crappiest movie. And as always they had to show Hindu kings as funny, useless guys and the Sultans as the ones who stood proud before the British atrocities
11 people found this helpful

Bhatta's ReviewsReviewed in the United States on January 12, 2019
3.0 out of 5 stars
Big Budget formula Movie!
Verified purchase
This was by far one of the most anticipated and most 'advance booked' movie in the recent times with more than 70% of seats sold in theaters in advance!. When you have such high expectations you are bound to nit-pick every detail of the movie leading to disappointments. Why Three Stars! you ask? - Unfortunately, even with the best efforts from the seasoned actors & super long playtime of 2.7 hours the movie misses the expectations in my humble opinion and here is why.

- Lack of strength in the story
- Predictable formula nature of the movie & poor direction.
- Poor choice of costumes that restricted their movements for main characters
- Rather lackluster screenplay with Slow motions everywhere and glorifying fight scenes (This gets boring soon)

Do not get me wrong. Despite all these the movie is still *okay* and can entertain whole family for one evening considering all the odds. Amitabh Bachchan plays the big role as 'Khudabaksh Jhaazi' A.K.A (Azaad) and Aamir Khan plays the character as 'Firangi Mallah' a Thug that keeps double-crossing. Aamir Khan's acting & chemistry between Bachchan in this movie is worth praising. Fatima Sana Shaikh plays the role of 'Zafira Baig' I am glad she was chosen as she looks better than Katrina Kaif in that role.

This is by far the most expensive Bollywood film to be produced thus far beating [[ASIN:B07BKQB14K Padmaavat]] on an estimated budget of ₹310 crore (US$43 million). Looks like the Bollywood producers and vested investors seems to aim higher and higher to make more and more expensive films these days in the hopes of hitting bigger & bigger Jackpot and cash in. The movie producers & vested investors did make their money for sure since as by ending of year 2018, [[ASIN:B07M5DJY9D Thugs of Hindostan]] has grossed ₹335 crore ($51 million) at the worldwide box office!!!

How long these sorts of Big Budget Formulas will continue to work? - Your guess is as good as mine!

Rating it with three stars!
3 people found this helpful

E. A. NevisReviewed in the United States on February 22, 2021
5.0 out of 5 stars
Bombastic, over-the-top... and very, very entertaining
Verified purchase
I saw this movie before I read any of the reviews, and I enjoyed the daylights out of it! It reminded me of the "Avengers" movies, maybe especially "Thor: Ragnarok:" thrilling (and highly improbable) action scenes, gripping drama, mesmerizing visual effects, and tongue-in-cheek moments where built-up tension was sledgehammered. I wouldn't call it absolutely perfect, but what's a minor plot hiccup here or a WTF costume there when I'm riding a sugar rush from all the eye candy? Nor did my ears feel neglected; the featured songs were OK (I appreciated the translation of the lyrics, some of which were haunting) but the instrumental score was engaging too.

It doesn't even try to be historically accurate. It bursts the boundaries of historical fiction and spills into alternate-universe historical fantasy. It's a superhero story without Spandex (except for maybe those sequined hot pants that were apparently all the rage in the 1790s) except the superpowers are human things like lying, trusting, charming, and holding a grudge. Even the precognitive guy is a half-mad astrology genius rather than having supernatural abilities. And Clive of India is a serviceable supervillain; even though the film's specific events are fictional, you can look up some of the things he really did.

I'm not sure what the Indian critics who panned this movie were expecting. The criticisms seemed to go "This is a completely crappy movie! Although the acting was good, and the effects were good, and the cinematography was good, and this and that were good..." Maybe they felt vulnerable after all the religion-based lawsuits around recent Indian films and TV shows. Maybe the movie was so over-hyped in its home country that it was doomed to disappoint. Or maybe they weren't its target audience; maybe we Amazon viewers from other countries are.

The movie IS long, though many Indian movies are longer. Make sure you visit the potty BEFORE you watch. And don't read reviews until AFTER (whoops, you already read this one.)

GypsiReviewed in the United States on March 14, 2019
2.0 out of 5 stars
Doesn't Live Up to It's Potential
Verified purchase
Set in 1795, Azaad (Amitabh Bachchan) and his ward Zafira (Fatima Sana Shaikh), lead a group of resistance fighters trying to free an Indian kingdom from the British East India Company's rule. The British commander John Clive (Lloyd Owen) sends a small-time confidence trickster, Firangi Mallah (Aamir Khan), to infiltrate the band and betray them. (Katrina Kaif also stars, as dancer Suraiyya)

The film has a great premise, and the first thirty minutes were quite good; sadly, the next 134 minutes were not. Instead of being exciting, funny, and enjoyable as shown in the trailer, it was mostly deadly dull. The "surprise" changes of allegiance became increasingly predictable and annoying. The action scenes are too long, as were the (average and below) musical numbers. Kaif's first number was embarrassingly ridiculous and not worthy of either her talent or dignity. Her performance, and that of Shaikh, were stiff and not natural. Owen made an exceptional villain, however. Bachchan and Khan gave strong performances, but that was not enough to redeem the entire movie. I would suggest watching the trailer, as it has all the good parts, and skipping the movie entirely.
3 people found this helpful

LitKingShanReviewed in the United States on February 16, 2019
5.0 out of 5 stars
Too many haters but the movie is pretty decent.
Verified purchase
The movie was splendid. Those that hated it don't understand Bollywood soul. This was great for families, and a decent watch for most people. Some scenes were very intense others could have been much better. Aamir did his best. Amitabh good as always for his age. The rest did what they could.
4 people found this helpful

StoryloverReviewed in the United States on November 27, 2020
5.0 out of 5 stars
Epic entertainment! Full of spectacle and surprises!
Verified purchase
If you're looking for an action/adventure film that's very smart, clever, fun, funny, touching, exciting, suspenseful, and unpredictable, give Thugs of Hindostan a chance.
This is such a great film: the story and the characters are excellent and keeps you guessing and you never know how it's going to end! And its India flavor and style gives it (and its story and characters) an enjoyable (and refreshing) originality. I've never seen an action/adventure film quite like this: it's very different and it's very cool. The soundtrack, both the music and the singing, is unforgettable; and the dancing, exhilarating. The music, singing, and dancing are all so beautiful, powerful, exotic, and overwhelming, all having that wonderful India-ness. And the sword-fighting and battle scenes are awesome by the way, orchestrated with great choreography and style.
If you're still unsure about the film, my advice is to watch the trailer and if you like it, watch the film in Hindi (its original language) with English subtitles. Also, ignore the three and a half star rating and avoid reading any negative critical reviews: if you like or love the film (and you just may), who cares what anyone else thinks?
I want to say more of why I loved it, but I don't want to spoil any of the story or the characters, so I'll end my review by saying, in the words of my favorite one, Firangi,
"1, 2, 3, 4, 5 - QUICK WATCH!"
See all reviews
Back to top
Get to Know Us
Make Money with Us
Amazon Payment Products
Let Us Help You
EnglishChoose a language for shopping. United StatesChoose a country/region for shopping.
© 1996-2021, Amazon.com, Inc. or its affiliates