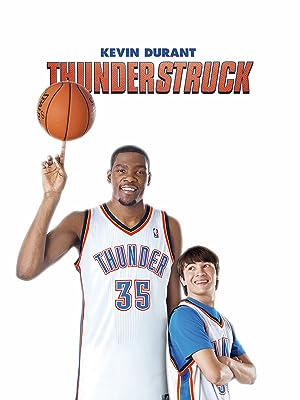 JenniferReviewed in the United States on December 26, 2018
5.0 out of 5 stars
Fun movie
Verified purchase
My Husband loves Kevin Durant and I got this movie for him for Christmas. We watched it on Christmas day before the Warriors game. It was a cute movie, perfect for a family, and especially for kids who love basketball. Highly recommend for a family. Not an adult movie, but we enjoyed it. I asked my Husband if he liked the movie, and he actually giggled, and said you like the movie. So I know he enjoyed it.
4 people found this helpful

Ivo PavlovReviewed in the United States on December 29, 2020
2.0 out of 5 stars
If you like KD it might be tolerable
Verified purchase
My kid made me watch it and I had promised that I would let him pick. That'll teach me to promise things....
Silly movie with tired, old plot line and it doesn't help that it has KD in it since he is not really a fan favorite in OKC after his backstabbing departure. I would not recommend!

JeffreyReviewed in the United States on June 21, 2017
5.0 out of 5 stars
Summer Hit!
Verified purchase
I heard this KD movie was great for younger kids, so I sent it to my 3 little cousins. I recently talked to my sister in law and asked how the kids loved the movie and she said they watched it 4x's today! Now that KD has changed teams and is a champion, it's a perfect time to send a positive message to kids, this movie didn't do all that great in theaters but it's a great hit at home during summer.
3 people found this helpful

M. WilkinsReviewed in the United States on December 27, 2012
5.0 out of 5 stars
Great movie for all KD fans!
Verified purchase
My 9 year old son is a huge KD fan, so I thought it would be a good movie for us to watch on his ne Kindle HD on Christmas Day. There were just a few touchy scenes for his age - mostly the scenes when the high school boys were trying to impress the girls. My son looked at me and said . . . "I have no idea what they are talking about." I was actually glad. I just explained that they were trying to be nice to the new girl because she was new in school. :)

There were also a few touchy scenes in Blindside too, but it is still a great movie for kids to see! I recommend it!

H. BalaReviewed in the United States on July 20, 2014
4.0 out of 5 stars
"Nobody comes into our house and beats us... anymore!"
Verified purchase
- NBA post-game show host Ernie Johnson: "So what is wrong with Kevin Durant?"
- Charles Barkley: "Well, I can't tell you what's wrong, but I can tell you what he's doing right... nothing. He's turrible."

16-year-old Brian Newall's reach very much exceeds his grasp, but maybe poet Robert Browning shouldn't have been so smug with that line. Brian's one big aspiration has brought him nothing but grief. His idol is Kevin Durant, that lanky superstar forward on the Oklahoma City Thunder. And so there's Brian (Taylor Gray) on the driveway, emulating No. 35's silky smooth moves, and the poor klutz just ends up hurting himself always. Plenty of Brian's basketball, um, exploits have been cruelly documented on camera and, hence, on YouTube. Kid is the laughingstock of Eastview High, OKC. He's on the school's basketball squad, but only as the team manager (re: towel boy).

Thunderstruck is no classic, but, boy, is it watchable. It's family-friendly fare (I do note the words "crap" and "piss off" are discharged once each). Kevin Durant, a very humble cat, had to be talked into going Hollywood. And while he won't be taking food off other actors' tables with his emoting skills, he generates a very likeable presence. I know these are differently toned movies, but I find him more naturally sympathetic than Shaq in [[ASIN:B00AEFXJY0 Blue Chips]] or Ray Allen in [[ASIN:630514415X He Got Game]] or Michael Jordan in [[ASIN:B004GJYROG Space Jam]].

What's taken from real life is how much of a good dude Durant is. I can totally see him feeling sorry for a young fan what just humiliated himself trying to sink a half-court shot during intermission. Durant signs a commemorative Thunder basketball and forks it over to Brian Newall. Brian wishes out loud that he had Durant's talent, and, in these kinds of movies, a wish errantly made carries significant power.

Cue the next morning comin' as the film proceeds to chart the utter collapse of Kevin Durant's game. No. 35 suddenly cannot make buckets, can't spin or cut or cross over or dunk worth a lick. It's neat that we could readily believe that Durant's persistence and work ethic are such that, even experiencing a horrific slump, he's still putting in endless hours in the gym trying to fix what ails him. Only, now, the Oklahoma City Thunder are in jeopardy of not making the playoffs.

Conversely, that same morning's brought about a drastic change in Brian. Come to find, he's abruptly got sweet handles and massive hops and an unerring jumper. He hopes his newfound skills and his immediate superstar status on Eastview's basketball team can attract that new girl from Denver, Isabel Sanchez, (Tristin Mays). Only, Mays brings such a level-headed vibe to the role, I wanted to counsel Brian that she don't play that, son. Mays reminds me of Varsity Blues' Amy Smart in how supremely unbowled over she is when her star athlete beau devolves into an ego-trippin' jackhole. So, yes, Thunderstruck heavily borrows from [[ASIN:B00005JMCW Freaky Friday]] AND from [[ASIN:B00AEBB9UU Varsity Blues]] and [[ASIN:B000068TPB Teen Wolf & Teen Wolf Too]].

There were outbreaks of laughter and impromptu cheering in my household when we watched this. Thunderstruck is good-natured and pretty funny, especially if you're plugged into the hoops universe and you're familiar with Kevin Durant. And because it's also that kind of movie, life lessons are imparted. Kid viewers will learn about the value of friendship and team work and working hard and persevering even though the odds are overwhelming, and, also, that you don't ever mess with WNBA star Candace Parker's money (that's a funny scene).

But the single funniest scene in the film? For me, it's the shoe commercial sequence.

Kevin Durant may not be an acting prodigy but he's bolstered by a solid supporting cast. Jim Belushi hijacks plenty of scenes as Eastview High's blowhard basketball coach who claims he was once was a, no lie, "Henry Ford Community College Honorable Mention All-Conference Guard." It's humble brags like that from Belushi that made me grin big. Props as well to his son, Robert Belushi, who is great as his oddball assistant coach Dan. And, yeah, that's Durant's real-life mom, Wanda Pratt, who has an amusing cameo as onscreen Durant's mom.

No surprise that Taylor Gray is more sympathetic when he was this clumsy, bullied loser. He becomes less likeable when, like Michael J. Fox in Teen Wolf and James Van Der Beek in Varsity Blues, he lets newfound fame get to his head. So what Gray does here is nothing new. It's so key that he's convincing as a basketball phenom. He had to be able to mimic Durant's signature moves - like the "Counter 62" or the "KD 35 Live Special" - and he sells it on camera. Taylor Gray has got mad handles. So let him and No. 35 coax laughter out of you for an hour and a half. Kevin Durant as a hapless underdog? Who woulda thunk it?

Matt KratzReviewed in the United States on July 9, 2021
4.0 out of 5 stars
Good
Verified purchase
This was a good movie, as it basically combines Hoosiers, Teen Wolf, and Space Jam. I loved seeing Kevin Durant in it. The DVD was good too.

Y. SunReviewed in the United States on December 18, 2012
5.0 out of 5 stars
Fun Movie
Verified purchase
Originally, I only went to see this movie with a couple of friends because they were thunder fans(Go Wiz!). (Even wanted to bring a pillow with me as I thought I was going to fall asleep halfway through.) I mean, NBA Players can't act right? Boy was I wrong, even though Kevin Durant's acting isn't the best, it defiantly seemed believable as the storyline really gripped me throughout the movie. Even though this is a knock off of some older movies, it brings a refreshing "2012" style to the plot.
3 people found this helpful

David EdgarReviewed in the United States on August 24, 2020
3.0 out of 5 stars
Good family movie
Verified purchase
Not a bad family movie but acting good use some work, a lot of these movies with about the same plot, kid with nothing gets lucky and becomes kid with everything.
See all reviews
Back to top
Get to Know Us
Make Money with Us
Amazon Payment Products
Let Us Help You
EnglishChoose a language for shopping. United StatesChoose a country/region for shopping.
© 1996-2022, Amazon.com, Inc. or its affiliates