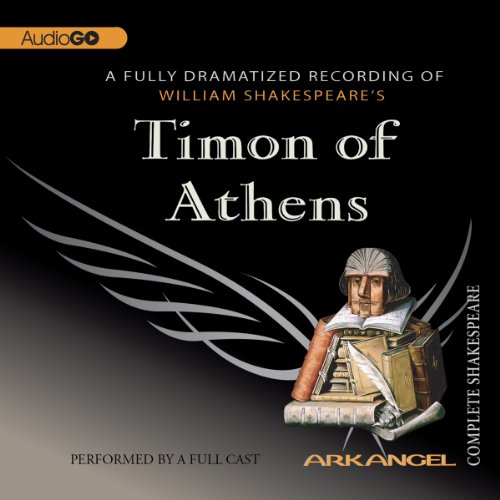 This controversial play follows the declining fortunes of a man of extravagant contradictions.

The fabulously rich Timon believes all his friends to be as open-hearted and generous as himself. When his wealth suddenly evaporates, however, he discovers the truth and his altruism turns to a bitter hatred of mankind. Stirred up by the cynical Apemantus, Timon retreats to the woods where he plots the destruction of Athens, the city that had formerly seemed to embody everything pleasurable and civilized. The cosmic scope of his hatred is communicated in a series of powerful and disturbing dramatic tableaux.

Your audiobook is waiting!
Learn more about membership
List Price: $13.97
You Save: $5.98 (43%)
By completing your purchase, you agree to Audible’s Conditions Of Use
Sold and delivered by Audible, an Amazon company

mperez247
5.0 out of 5 stars Inflation is a bitch
Reviewed in the United States 🇺🇸 on July 21, 2022
Verified Purchase
Crazy pilot episode! Can't wait for season two where Timon comes back from the woods to get his revenge.
Read more
Helpful
Report abuse

Tyson
VINE VOICE
5.0 out of 5 stars Superb Dramatization
Reviewed in the United States 🇺🇸 on June 3, 2015
Verified Purchase
I recently read through the complete works of Shakespeare and Timon of Athens was my surprise favorite. I figured it would be one of the less rewarding plays since I rarely hear it referenced, but it turned out to be a delightful premise full of the best Shakespearean insults in the canon. It's a short play and some argue that the ending is left unfinished, but I'm obsessed with it. The Arkangel dramatization no doubt contributing to my positive impression. The entire cast is extremely talented, nailing the timing and executing spot-on delivery. I highly recommend reading this play along with this audio version.
Read more
3 people found this helpful
Helpful
Report abuse

graypast7
5.0 out of 5 stars Shakespeare for today
Reviewed in the United States 🇺🇸 on April 7, 2013
Verified Purchase
Seriously? It's Shakespeare, and Arden. Best combination, despite the fact that this is NOT one of Shakespeare's best. However, it is one of the plays most relevant for contemporary audiences, especially given the economic climate of today. The play, probably written by Shakespeare in collaboration with another playwright (probably Middleton) is choppy and somewhat confusing in parts. It's believed that there are sections missing, and that makes sense when you read the overall play. Read the play for the individual scenes, and the sometimes unintentional humor. It's worth the time, and thought, that Shakespeare requires.
Read more
3 people found this helpful
Helpful
Report abuse

Ethan Todd
4.0 out of 5 stars Tragic, depressing, but an interesting read
Reviewed in the United States 🇺🇸 on June 8, 2013
Verified Purchase
I am a huge Shakespeare fan, but I admit Timon of Athens is not his most entertaining read. The story follows the tragic downfall of the wealthy, powerful, generous Timon, as his financial collapse drives him to madness. The story is very depressing, but it is very insightful with powerful character development.
Read more
One person found this helpful
Helpful
Report abuse

Judith M Clinton
1.0 out of 5 stars Don't buy Kindle edition
Reviewed in the United States 🇺🇸 on April 20, 2016
Verified Purchase
The play is fine, but this Kindle edition is horrible. The blank-verse lines are rendered as run-on sentences with no breaks between them. There is no differentiation in the font or typeface between the name of the character speaking and what they are saying so it's very confusing. It contains many, many errors.. After wasting $.99 on the Kindle edition, I found far superior free versions on-line, so save your money or buy a hard copy.
Read more
One person found this helpful
Helpful
Report abuse

J. M. Lutz
1.0 out of 5 stars Don't bother with the Kindle edition
Reviewed in the United States 🇺🇸 on October 10, 2012
Verified Purchase
Apparently a direct transcription of the physical book's text, the Kindle edition of this play is very poorly formatted. Line-breaks are muddled and the editorial notes get mixed up in the play-text proper. Very disappointed that Pelican would do this -- I imagine they simply wanted an easy way onto the ebook market and didn't think about the mechanics of what they were doing at all. If you need electronic Shakespeare, get it somewhere else.
Read more
3 people found this helpful
Helpful
Report abuse
See all reviews

Eleanor Wye
4.0 out of 5 stars I knew nothing about this play...
Reviewed in the United Kingdom 🇬🇧 on September 9, 2019
Verified Purchase
...So it was great to read one of Shakespeare's lesser-known works. I was surprised at how much I enjoyed it: a clip froma current production made it look very violent, but the play itself is not so. Much was made re Shakespeare's partnership with Middleton in writing this play, and I found it fascinating to see which parts were clearly written by the latter.

Thanks for producing this play on Kindle!
Read more
Report abuse

alrick lawrence
1.0 out of 5 stars rubbish
Reviewed in the United Kingdom 🇬🇧 on March 18, 2019
Verified Purchase
it was rubbish full of spelling mistakes, do not buy
Read more
Report abuse