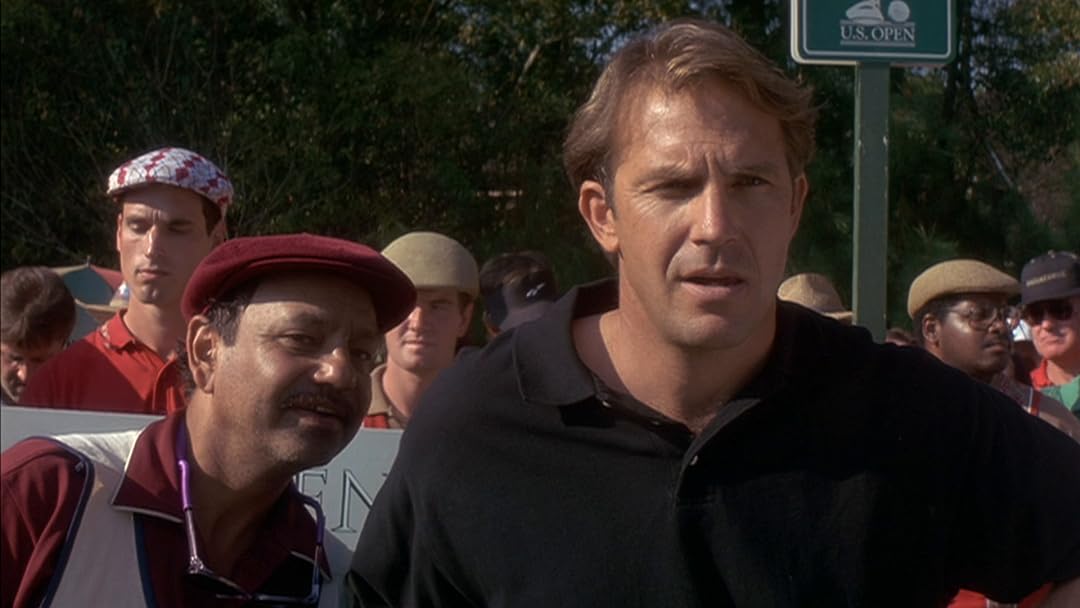 (3,938)
6.42 h 14 min1996X-RayR
A one-time golf contender, now running a dilapidated driving range, returns to the pro tour to win the girl and take down a smarmy rival. From the director of Bull Durham, with Don Johnson.

John MillerReviewed in the United States on August 18, 2018
2.0 out of 5 stars
Like Rene Russo's swing, too over the top
Verified purchase
Tin Cup has some truly iconic scenes that everyone talks about: finishing the round with nothing but a 7-iron, and the never-ending string of drops on the 18th hole. One star for each of those. Aside from that, I just can't get past Rene Russo's character: she plays a psychologist and talks nothing like one. She claims to be a feminist, but acts nothing like one. Somehow she manages to demean both psychologists and women in one fell swoop. I get that her role is perhaps just meant to be a spoof and act as eye candy, but it's not the sort of thing I go in for. So far off the mark, in fact, that I can barely sit through the first 15 minutes. Not sure how I managed to make it through the first time, and so bad that I'm just going to go hunting for clips of the golf scenes on YouTube.
2 people found this helpful

JWolfReviewed in the United States on October 27, 2013
3.0 out of 5 stars
Not Your Typical Underdog
Verified purchase
OVERVIEW: Co-written and directed by Ron Shelton, the 1996 romantic comedy "Tin Cup" takes its place as a humorous and well-acted underdog story about a former golf prodigy, Roy McAvoy, who never lived up to his potential. Once McAvoy finally finds his motivation (be it a woman or just a chance to one-up the other guy), he does whatever it takes to qualify for the U.S. Open and prove his worth in the world of golf.

The first time I saw "Tin Cup," it was being broadcasted on basic cable. As I watched, I couldn't believe how funny it was and that I'd never before heard of the movie. I quickly went online to purchase the DVD for home viewing. On a personal level, I get a little tired of the motivational sports movies that take themselves too seriously--for this reason, "Tin Cup" is among my favorites for the genre. Rotten Tomatoes gives "Tin Cup" a 69% rating on the tomato-meter, which is higher than I had anticipated, yet seems to signify a respectable fan-base for the film.

SUMMARY: As a young lad, the world of golf had high expectations for Roy "Tin Cup" McAvoy, but Roy seems just fine and dandy living the simple life in West Texas. When he's not drinking with his buddy Romeo, Roy runs a driving range (though he usually does both simultaneously). Psychologist Molly Griswold, perhaps inspired by her professional golfer boyfriend, David Simms, enlists Roy's services for golf lessons.

Roy initially believes Simms is offering him a spot to play in an upcoming tournament, but Simms actually wants Roy to caddy. Despite the blow to his ego, Roy agrees to lend his expertise of the course. Amid play, Roy and Simms engage in an argument about the best strategy for a particular hole; Roy insists on shooting for the green while David prefers to air on the side of caution, thus avoiding the water hazard. As the men pump their fists, the peanut gallery takes bets on the men. Against Simms' wishes, Roy breaks caddy-ship and takes the 230-yard shot, landing his ball on the green.

Weighed by Simms's insults, Roy seeks revenge by beating him in the U.S. Open. In order to qualify, Roy knows he has to overcome a few personal issues--the kind for which Molly agrees to help. Roy's recklessness on the course digs him into an even deeper hole. In the meantime, Molly gains a new perspective of her high-and-mighty boyfriend, which seems to drive her and David further apart, but she and Roy closer together.

Eric MayforthReviewed in the United States on June 16, 2013
4.0 out of 5 stars
A Birdie, If Not an Eagle
Verified purchase
In the 1996 film "Tin Cup," Roy McAvoy (Kevin Costner) is the owner of a driving range in rural West Texas. Once seemingly destined for stardom on the PGA Tour, Roy is stuck in a directionless life and trapped in obscurity. When Molly Griswold (Renee Russo), a psychologist, shows up for golf lessons, Roy becomes smitten but learns that she is involved with an old college teammate of his, tour pro David Simms (Don Johnson).

Roy and David have a falling out during a charity tournament, leading Roy to attempt to qualify for and win the U.S. Open. He must conquer old demons that kept him from reaching his potential in the past--he relies on Molly for advice on the mental side of his golf game, but marches to his own drummer and does not rely on the sound advice of his caddy, Romeo Posar (Cheech Marin), on course management when they are inside the ropes. Along the way, he finds that he wants to win not just the Open but Molly as well.

"Tin Cup" is a generally enjoyable movie and would likely be found so by both sexes, as it is both sports flick and romantic comedy, and the four main cast members are all great in their roles. Cameo appearances are made by PGA Tour stars of the mid-Nineties such as Phil Mickelson and Lee Janzen, and Jim Nantz plays himself as a broadcaster. Rated R for language and adult content.
2 people found this helpful

dsrussellReviewed in the United States on August 6, 2000
4.0 out of 5 stars
Enjoyable
Verified purchase
"Tin Cup" is a light-hearted story of a talented, but quirky golf pro, Roy McAvoy (Kevin Costner as more of a "never-quite-been" than a "has-been") that owns a run-down driving range in the middle Texas desert country. There is, of course, the obligatory assortment of odd-ball characters that are employed at the driving range, but this actually works to the movie's benefit. Cheech Marin plays Costner's long-time friend and caddy, and his performance is a major highlight of this movie. Don Johnson is superb as the cool, calculating touring pro with an engaging smile and a heart of steel. Rene Russo is also on hand as a rather flakey pyschologist, who just happens to be Johnson's girlfriend.
While I can't put this film in the big belly-laugh catagory, it is cute, warm-hearted, and has several rather funny scenes. Although I wondered why it took 2 hours and 15 minutes to tell such a simple story, I really only found it boring when the movie strayed unnecessarily to McAvoy's problems with his ex-wife (an exotic dancer, no less).
Those minor problems aside, I enjoyed the fact that the ending differed slightly from the standard run-of-the-mill "old pro makes good" scenerio. I also enjoyed the appearances of the real golf pros and announcers (some of the movies best moments are on the golf course and with the banter of the announcers and tv producers behind the scenes).
While I doubt "Tin Cup" will be considered a classic, I enjoyed it for what it was--a light-hearted romantic comedy with a feel-good ending. Between 1 and 10, "Tin Cup" gets a marginal 7.
5 people found this helpful

Benjamin J BurgraffReviewed in the United States on February 7, 2000
4.0 out of 5 stars
Costner Shoots a Birdie!
Verified purchase
Kevin Costner should stick to playing likeable average guys in films like 'Tin Cup'! Ron Shelton, who had worked with the actor earlier in one of the best baseball films ever made ('Bull Durham'), takes on the trials and tribulations of a journeyman professional golfer in this outing, and while it lacks the charm and comraderie of the earlier film, it manages to make the solitary nature of golf more human and acceptable to all the non-golfers out here.
It is not the best golf film ever made (that honor goes to the Randy Quaid comedy, 'Dead Solid Perfect'), and it does have flaws (the leisurely pacing, some overlong scenes), but there is such a warm, fuzzy feeling to the entire film that you end up rooting for Costner, both on the golf course, and in his pursuit of Rene Russo (who is wonderful!)
Cheech Marin provides welcome comedy relief, and Don Johnson's slick smarminess is a perfect counterpoint to Costner's gonzo approach to golf and life.
Costner's laid-back charm, perhaps his greatest asset as an actor, is often lost in sci-fi epics like 'Waterworld', and 'The Postman', or tearjerkers like 'Message in a Bottle'. Sports films are a far better venue for him ('Bull Durham' and 'Field of Dreams' are cases in point), and he is relaxed and confident in 'Tin Cup', making this one of his best performances.
Buy it! You won't be disappointed!
38 people found this helpful

LuLu2315Reviewed in the United States on October 20, 2021
5.0 out of 5 stars
Great funny movie.
Verified purchase
Just buy it, I don't know why you are even thinking about it and reading reviews. Great cast, movie and overall a good time,
One person found this helpful

E. J. AlcornReviewed in the United States on January 27, 2022
1.0 out of 5 stars
Didn't Get What I Thought I Paid For
Verified purchase
Didn't plan to get this. Thought I was paying for "The Legend of Bagger Vance" and got this, thinking that Will Smith and Matt Damon were going to show up as he did in the trailer. Don't know what happened, but too raunchy.

Glama PussReviewed in the United States on November 26, 2021
2.0 out of 5 stars
Boring and really...
Verified purchase
no clever dialogue at all. Pretty people to look at but I was expecting a bit ore conflct, my interest waned. Do not recommend.
See all reviews
Back to top
Get to Know Us
Make Money with Us
Amazon Payment Products
Let Us Help You
EnglishChoose a language for shopping. United StatesChoose a country/region for shopping.
© 1996-2022, Amazon.com, Inc. or its affiliates