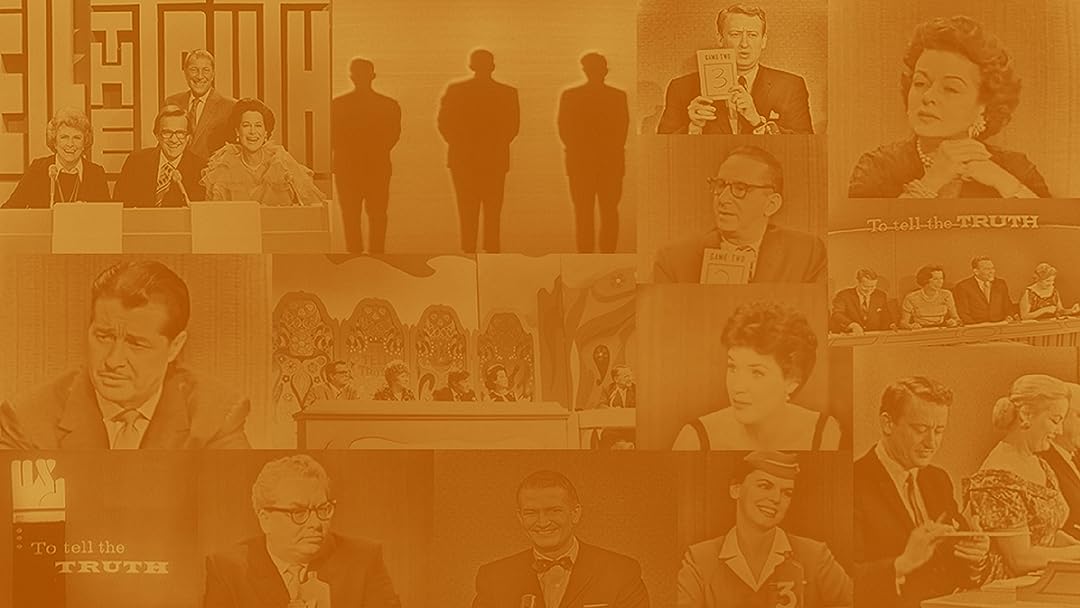 To Tell The Truth with Bud Collyer

Season 1
(11)
1961TV-G
A celebrity panel tries to guess which of three contestants is the person they are claiming to be.

K. SandnessReviewed in the United States on May 2, 2018
3.0 out of 5 stars
A Game Show from More Than 50 Years Ago
As one who has childhood memories of To Tell the Truth, I enjoyed this trip into the past. Looking at it from over 50 years later, a few things stand out:
1. Of all the dozen or so panelists who appear in this show, only one (Betty White) is still alive.
2. For all her ditzy acting persona, Peggy Cass was smarter than she appeared.
3. Kitty Carlisle's life as a prominent New York socialite was reflected in her frequent questions that asked "Who is the head of [a certain company or institution]" or about the details of foreign locales.
4. Tom Poston was remarkably inarticulate and irritatingly long-winded, yet he is the only panelist who appears in all 20 episodes.
5. Most of the men who appeared on the show as contestants had accomplished something, but many of the women were secretaries to prominent people, such as the Mercury 7 astronauts or the White House press secretary.
6. The one set of Black contestants who appeared on the show were treated with respect and with no mention of their race. The one set of Native American contestants elicited a lot of ethnic jokes.
7. Everyone is more formal in both dress and mannerisms than they would be today.

As one who lived through those years, although as a small child, I enjoyed this trip to the past. There were some genuinely funny moments, too. I wonder what a young person today would make of it.

Big MommaReviewed in the United States on April 18, 2021
5.0 out of 5 stars
What a delight!
I had seen an episode or two of the contemporary revival of 'To Tell the Truth,' which is far more glitzy, higher-energy, with panelists who are not all very well-known, unless you are an Entertainment Weekly subscriber. I decided the format of this game show, which I had watched when I was a child, is clever enough to warrant a visit to the old black and white episodes. I was pleasantly surprised. Hooked, in fact. I had to buy the DVDs, which have only some episodes, so that I can share this treasure with people who can't watch old games on their TVs and don't use computers. Older friends.

It's nearly painful to watch these old episodes because the nostalgia can feel overwhelming. The panel is relaxed. They have fun in a non-competitive way. The women panelists dress up, so you see Kitty Carlisle with a diamond necklace, for example. There is something to be said about sheer glamour. Betty White does not project that glamour, but, my, she was so attractive that she could get away with a potato sack dress, if she had to.

Watching a young Merv Griffin guest host reminds us that, once upon a time, he was a polished young upstart. So was Johnny Carson, who appears as a panelist. Here's a surprise: in those days, actors had nice enough teeth, but they did not have incisors that shine like beacons in the darkness. Women perfectly coiffed and men clean-cut and trim: that was the panel's profile.

The game proceeds quickly, but the panelists are so relaxed, so 'unhip,' so not-frantic, so at ease with each other. It is really wonderful. No one is a slacker, no one is a prima donna, no one is a stereotypical (___fill in the blank__) proclaiming an identity or style. That's the panel, which varied a little, but did not veer much from a pool of usual participants: Poston, Carlisle, Don Ameche, Peggy Cass, Betty White, Dina Merrill.

The guest impostors are people who work - even in 1961, there were few women who were housewives on the show. They really did have some very impressive careers, although you knew that marriage might take precedence in the future. There were a few women entrepreneurs. If they stayed single, that was OK, too! One woman who was the focus of the guessing game was a type of forest warden, living in the woods and spotting fires. One woman was the very busy assistant to the Cabinet in the White House, managing agendas, planning trips, and taking notes at an important time in history.

The women worked, the men looked professional whether they taught high-school English or ferried passengers or roped steers. What you might find amazing (I did) was the lack of kowtowing to the impostor guests when they turned out to be presidents of large companies, or owned vineyards, or commanded thousands of enlisted men. There was a feeling that, across the board, all shared the same kind of life, made their ways without fanfare and bragging - at least in front of the camera. One guest impostor described himself as a drummer - if you look him up on Wikipedia, he turns out to be a very famous drummer! One impostor was Bing Crosby's brother (who was successful in a small city, I believe, and held a white collar job there.) What a refreshing change to see all of these people feeling, and showing themselve to feel, so much alike.

I was reminded while watching the episode that featured one of the crew members of PT 109 (Jack Kennedy's boat in WWII in the Pacific) that President Kennedy was one hell of a courageous guy. If they make a movie of that incident (I believe they already have, but make it again!), I wonder who would play Jack Kennedy swimming in the sea with his injured crew member's life jacket strap in his teeth, to tow him to safety. Maybe a film would not really capture the value of that decision.

P.J. D.Reviewed in the United States on April 6, 2019
4.0 out of 5 stars
Great Show - Closed Captioning is a Joke (typical for Amazon)
Always love a quality show no matter what decade it's from. However someone needs to proof check the closed caption typing. Everything from the names of the people to simple words were ridiculously wrong. This is NOT limited to this show -- all closed captioning on all Amazon Prime shows is a joke.
5 people found this helpful

HigginsReviewed in the United States on June 3, 2021
2.0 out of 5 stars
Dumbest Panel Ever
I've watched other panel oriented old timey shows, and enjoyed them quite a lot. But these guys? They almost never ask questions actually relevant to narrowing down who the real person is, just tangentially related trivia that there's no reason who someone who actually works in these professions would know. I've literally never seen a panel so unintelligent before.

The BasReviewed in the United States on July 31, 2018
5.0 out of 5 stars
What is your name? Yes, Classic stuff and really fun to watch.
Thanks BUZZR for this great flashback from the past. It was great seeing one of our all time fave game shows. After seeing the recent reboot, you really notice how the panelists back then really took things seriously and had much more intelligent questions. Today's version is more about making jokes, but is still fun to watch. I can't imagine Amazon is paying through the nose to make these available, so please let's get some more up there for us to watch!!
2 people found this helpful

James L. SuttlesReviewed in the United States on November 25, 2019
5.0 out of 5 stars
I'm Sure Glad to See This on Amazon!
I remember watching this television show as a young child back in the 1960s, and loved it even back then, when I barely understood what the subject matter was.
Watching it today, not only is it a remarkable time capsule, but it was the embodiment of class and intelligence, unlike so much of the garbage that pollutes our airwaves today.
I hope Amazon will add more seasons soon.
2 people found this helpful

StellaReviewed in the United States on July 9, 2021
5.0 out of 5 stars
The commercials were my favorite
Betty White and that huge gem necklace! Her facial expressions are classic. And Dristan!
See all reviews
Back to top
Get to Know Us
Make Money with Us
Amazon Payment Products
Let Us Help You
EnglishChoose a language for shopping. United StatesChoose a country/region for shopping.
© 1996-2022, Amazon.com, Inc. or its affiliates