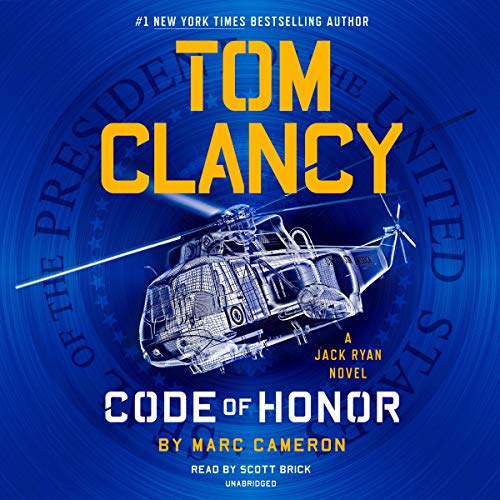 As president of the United States, Jack Ryan has faced many challenges, but none have been as personal as this, and never has he been this helpless in the face of evil in the latest entry in Tom Clancy's number one New York Times best-selling series.

Father Pat West, SJ, was a buddy of the young Jack Ryan when they were both undergraduates at Boston College. Father West left a comfortable job in the philosophy department at Georgetown to work with the poor in Indonesia. Now, he's been arrested and accused of blasphemy against Islam.

President Ryan is desperate to rescue his old friend, but he can't move officially against the Indonesians. Instead, he relies on the Campus team to find out who is framing the priest.

There's one other twist to the story. President Ryan discovers a text on his private cell phone from the priest warning about a coming attack against America....

Your audiobook is waiting!
Learn more about Membership
List Price: $35.00
You Save: $4.37 (12%)
By completing your purchase, you agree to Audible’s Conditions Of Use
Sold and delivered by Audible, an Amazon company

Edward J.
1.0 out of 5 stars BIG LETDOWN
Reviewed in the United States on November 20, 2019
Verified Purchase
i have read every Clancy book and all the new guest authors. I an struggling to get through the first chapter. This author sadly puts a new spim on all the characters personality and it is not good. so far there is nothing to make me like the cast. In the past series it was a page turner. Not it is shut down the kindle and start the new Baldacci book. Hope there is a new author for the next book.
Read more
27 people found this helpful
Helpful
Report abuse

JoN
1.0 out of 5 stars I knew Tom Clancy and Marc Cameron is NO Tom Clancy!
Reviewed in the United States on November 25, 2019
Verified Purchase
Tom Clancy is rolling in his grave! These characters and their personalities have been well defined over the last 35 years but this author doesn't care he going to hollow them out and make them sad caricatures of themselves. I didn't get past the first few pages an already I started noticing details the author got wrong that simply looking at a map would have helped. I've read Tom Clancy for years because it had good story telling, solid characters and the attention to detail was beyond reproach. I can accept so mistakes and some creative license from the people who carry his legacy, but this book was crap. This book was phoned in and is just a blatant money grab. I have expectations when I buy Clancy and this author did not even come close. They should NEVER let him touch this franchise again.
Read more
25 people found this helpful
Helpful
Report abuse

Kindle Customer
5.0 out of 5 stars EXCELLENT
Reviewed in the United States on November 22, 2019
Verified Purchase
Tom Clancy started the ball rolling and Marc Cameron has added his influence. I'm not sure if I can find a way to make the distinction between the two men.
Highly recommend reading this book.
Read more
9 people found this helpful
Helpful
Report abuse

RS
4.0 out of 5 stars Code of Honor
Reviewed in the United States on March 10, 2020
Verified Purchase
Although this series can feel a bit stale at times and desperately needs to go in a new direction to shake things up (how much longer can Jack Ryan possibly be president, and how much longer can they keep bouncing back and fourth between some nefarious plot by Russia and China?), these Clancy books remain superior thrillers in terms of quality of writing, plotting, and research.

Although Mark Greaney's additions were more entertaining and exciting, Marc Cameron is probably the technically better writer, and his books are very Clancy-like. They actually read like something Clancy himself may have written. Cameron's prose comes very close to replicating Clancy's voice, and he writes slow building plots involving disparate threads that slowly weave together. His books also have a little less action than Greaney's, but a heavier focus on espionage spycraft and law enforcement. Cameron also excels at developing his characters, including his original, non-Clancy characters.

This addition is no exception. It's a well written and realistic story involving Chinese spies conspiring to steal a sophisticated artificial intelligence and a plot to bring down President Ryan. It's a bit different in that the first half of the book barely features Ryan or The Campus cast of characters, instead mostly focusing on secondary characters and setting up the suspenseful second half of the book that delivers original plots and scenarios for the characters.

Richard Hallberg
5.0 out of 5 stars 5Stars!
Reviewed in the United States on December 4, 2019
Verified Purchase
Code of Honor was an exciting read. Tom Clancy was a special author that passed too soon. Marc Cameron has done another exemplary job and the plot flowed and built with very real intensity. You’ll find all the old characters in the Washington elite and go along on a suspenseful mission with “The Campus” operators. The story explored AI and cyber war scenarios in a very real and frightening way. Great read!
Read more
Helpful
Report abuse

newflowers
5.0 out of 5 stars Another good one
Reviewed in the United States on December 8, 2019
Verified Purchase
The continuing saga of Jack Ryan, John Clark, and The Campus players is always a fun weekend read. I do wish the denouement were longer - 450 pages of intrigue then 51 pages to wrap is too disappointingly fast. Still a worthy read and I look forward to more.
Read more
Helpful
Report abuse

Jorge B.
5.0 out of 5 stars Great Jack Ryan novel
Reviewed in the United States on February 18, 2020
Verified Purchase
I loved this book. It had tremendous energy to the point of causing anxiety. The characters were great and well developed. I highly recommend this book.
Read more
One person found this helpful
Helpful
Report abuse
See all reviews

Chris Widgery
2.0 out of 5 stars Great central idea, but all a bit meh
Reviewed in the United Kingdom on July 16, 2021
Verified Purchase
When the world around us is so rubbish, who doesn't love a bit of escapism, right? And these big, dumb techno thrillers provide that.

The central idea of this book is very current - an AI programme that can get into any system and cause chaos. What would happen if that was unleashed on the world? I'd read that.

But the execution is all a bit underwhelming. The resolution, in particular, is a real let down. I won't spoil it, but it's rubbish.

There are the typical chases, gun fights, military/spy guff and lots of slightly worrying right wing world views, which are all good fun, but the overall experience was disappointing. Now that Mr Clancy has passed on, I wonder if the time has come to call it quits?
Read more
Report abuse

Ron Robson
5.0 out of 5 stars An excellent book with a great story that could actually be happening today.
Reviewed in the United Kingdom on June 7, 2021
Verified Purchase
This book was typical Clancyish. A good story set in the modern world setting, with characters that represent real people, not the cancel culture or extremes like wokism. The main theme was based around China's wish to dominate the World, which is playing out at present in the real World. AI is the future, how it is utilised and the vagaries that surround it are also a problem in the real World. A good story with plenty of action and intrigue, also a number of Red Herrings. Well done!!
Read more
Report abuse

Alan Fairhurst
5.0 out of 5 stars Artificial Intelligence is the future
Reviewed in the United Kingdom on March 23, 2021
Verified Purchase
A old colleague and friend of President Ryan is in trouble in Indonesia. Jack sends the Campus to recover some expensive software that could jeopardise military defence systems. Elsewhere Cathy helps out in an attempt to save the sight of a little girl; and joins the Diplomatic Corps for a while. Mystery, suspense, blackmail and intrigue make this another awesome thriller from Marc Cameron.
Read more
One person found this helpful
Report abuse

Colin
5.0 out of 5 stars Tom Clancy's Code of Honour: A Jack Ryan Novel
Reviewed in the United Kingdom on May 4, 2021
Verified Purchase
A favourite author of mine. Read many of his books and enjoyed them all. For lovers of espionage, warfare, politics and the occasional back-stabbing. Excellent.
Read more
One person found this helpful
Report abuse

Michael Payne
4.0 out of 5 stars Jack Ryan times two
Reviewed in the United Kingdom on June 9, 2021
Verified Purchase
I have not given 5 stars because I think previous Jack Ryan novels have been better. This one had a rather incredulous plot and lacked deep characterisation. However, it was an engaging and highly readable romp and I would be happy to read more like it.
Read more
Report abuse
See all reviews