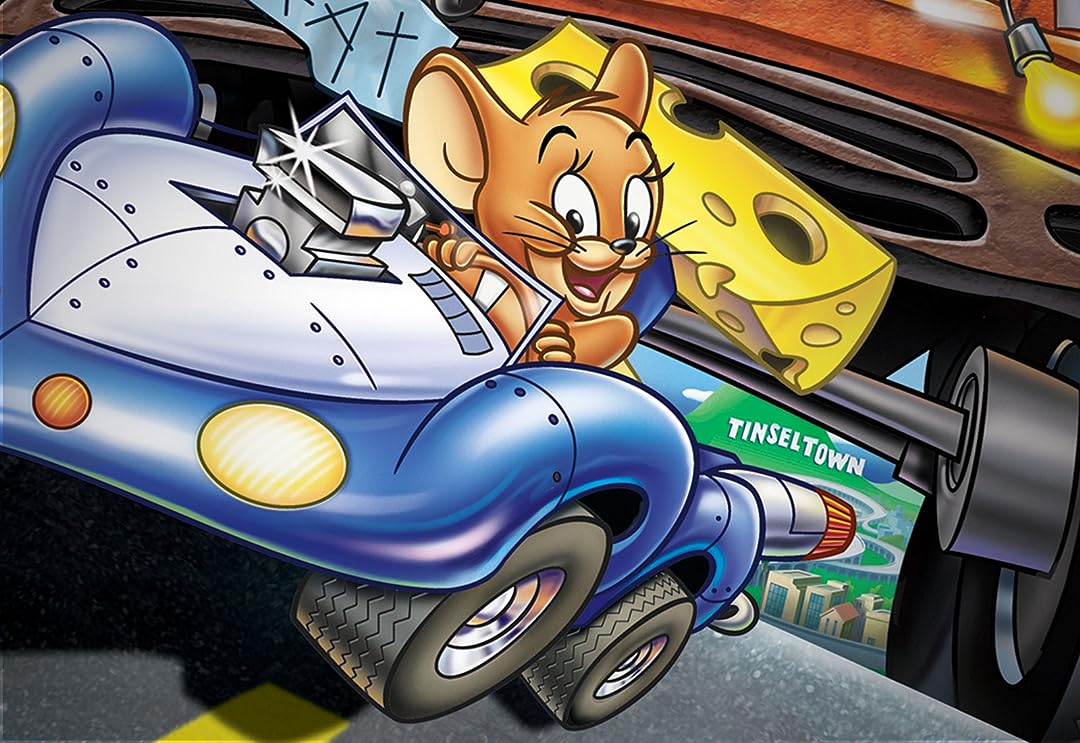 Tom and Jerry: The Fast and the Furry

(419)
6.71 h 14 min2016ALL
Tom and Jerry enter an extreme car race competition called the "SuperRace" in order to win the grand prize of a beautiful, dream mansion!

Jacob sReviewed in the United States on July 21, 2016
3.0 out of 5 stars
3.5 Stars The first Ten Minutes are Golden
Verified purchase
The first ten minutes are a wonderful TJ chase with great gags, drawings, and animation. After that, we get an entertaining race with interesting characters. The TJ rocket scenes inspire some great gags and Tom Kenny's vocals are a hoot. Recommended. Just do not expect perfection or the film to be much like the original shorts. The humor is actually darker than the original series
One person found this helpful

Steven S.Reviewed in the United States on August 14, 2020
5.0 out of 5 stars
Great movie night
Verified purchase
We had movie night and wanted to watch some old school cartoons. This was a great funny movie for us to enjoy. The kids loved it!

BOYDReviewed in the United States on November 27, 2019
4.0 out of 5 stars
Good but it's not the classic T & J
Verified purchase
You get what you buy when buying new movies. But my 6 year old much prefers the classic Tom & Jerry cartoons over these newer movies.

RomeReviewed in the United States on June 13, 2015
1.0 out of 5 stars
Horrible, just horrible.
Verified purchase
Okay first off, can I say that it's awesome that Joseph Barbera wrote the story and executive produced...but some how that can't save this cartoon...sigh

This starts off with the usual cat and mouse chase...no real reason behind it, but the mass destruction and mindless mayhem brought out some good laughs from me. After the extended chase sequence that resulted in the TOTAL annihilation of the human lady's home Tom and Jerry are living in, the duo gets kicked out. As Tom and Jerry leave the smoldering premises, they both catch a commercial for the The Fabulous Super Race show with a richly grand prize. Both cat and mouse race (ha ha) to the junkyard and piece together their race cars to be contestants. Once completed they make their way to the studio to enter the contest, via a few nods to Pee Wee's Big Adventure's studio end scenes.

Next up, we are introduced to the racers, a madcap group of wacky racers...you see what I did there. So anyway, this is pretty much an updated sort of wacky racers that just happen to have Tom and Jerry. The race starts in Hollywood with the race supposedly ending in Mexico. However, with Tom and Jerry's constantly trying to kill each other, the race's TV ratings are through the roof so the Powers That Be decide to extend the race into different stages around the world. So with each "stage" of the race we start losing racers which is good because with the 6 total racers at the start there really wasn't much screen time for our favorite duo. So finally half way through the movie, in the Antarctic stage we are down to just Tom and Jerry and the next stage is in Australia.

As Tom and Jerry race start up the next stage Australia another racer manages to catch up, and the next stage is run where the other racer manages to die (yes, you read that correctly) so now we are back with just Tom and Jerry. The producer/director of this race tells his assistant that the public is getting bored with the race and will soon tune out so the race must be sped up. So it is decided that once this leg of the race is complete that Tom and Jerry must make it to the finish line in 5 minutes. So into jets they go and fly across the globe destroying everything in their path. The duo manage to cross the finish line at the same time winning the million dollar prize.

Hurray! Tom and Jerry win, but it's short lived as the lady from the beginning of the movie barges in to mansion that Tom and Jerry live in now and demands that it's hers since Tom and Jerry destroyed her other one. So the chase is on again and more destruction as the credits roll.

The Good:
There a some pretty good laugh out loud moments, but they are few and far between. The most laughs, for me are in the first seven minutes and that's about it.

The Bad:
This is like a 7 minute cartoon stretched to 75 minutes. The cars are almost magic as it seems because they can be modified at any given moment depending on the stage. Now I know this is a cartoon, but it goes beyond ridiculous. The violence...let's talk about this for a moment. I know Tom and Jerry are violent, I get that, but everybody and everything is beating something or someone up. Tom is a homicidal maniac in this. I've never seen him this maniacally vicious and who leaves a path of destruction wherever he goes. Brutal, just brutal for a Tom and Jerry cartoon.

The Ugly:
The animation is horrendous, it's stiff and feels really cheap. The show drags on and on with each stage, and finally towards the end of the movie it is decided that the race needs to end in 5 minutes. The race should have ending after 15 minutes instead of in 75 minutes; it needed to be very short. Surprisingly, Tom and Jerry had very little screen time, there were a lot of time spent on the announcers of the race and the other racers. Often I'd be wondering where Tom and Jerry were as they were the only non-annoying characters in the whole show.

I hate this cartoon! Everything about this movie was horrible, the dialog, premise, animation, and character interactions. I hope to never see The Fast and the Furry again, which is sad since Joseph Barbera produced this and was given story credit.

B CobosReviewed in the United States on May 9, 2017
5.0 out of 5 stars
Great buy
Verified purchase
I absolutely Love this dvd and so do my kids! Packaging and all was in great condition as well. I recommend this product and seller.

RayReviewed in the United States on October 11, 2017
5.0 out of 5 stars
Great episode!
Verified purchase
My son loves Tom and Jerry. Great episode!

Melissa HarrisReviewed in the United States on July 18, 2021
1.0 out of 5 stars
Dvd does not play
Verified purchase
The dvd wont play.I hope amazon will send me a free dvd my son was not happy.Come on amazon this is ridiculous!
See all reviews
Back to top
Get to Know Us
Make Money with Us
Amazon Payment Products
Let Us Help You
EnglishChoose a language for shopping. United StatesChoose a country/region for shopping.
© 1996-2021, Amazon.com, Inc. or its affiliates