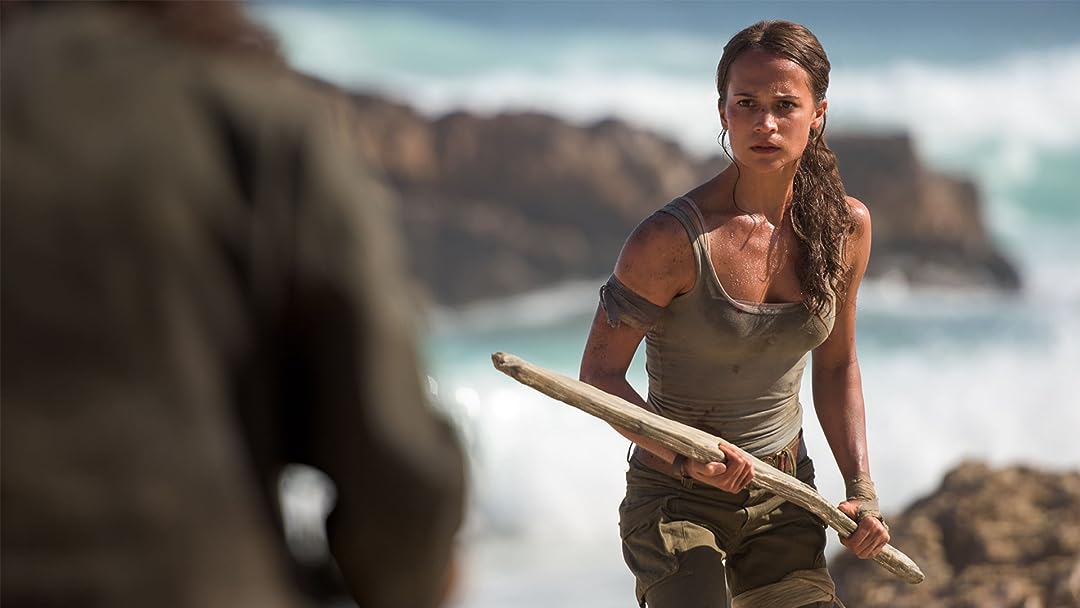 Tony R.Reviewed in the United States on June 29, 2018
4.0 out of 5 stars
An Entertaining Movie Worth a Rental
Verified purchase
This is one movie that surprised me as I know it didn't do well at the box office and came and went rather quickly at theaters. From my point of view, it's actually entertaining and Alicia Vikander does a very credible job in the lead role. It had been years since I watched Angelina Jolie's performance and did so after viewing this version. Vikander clearly wins the action sequences hands down as there's little doubt she trained hard to do as many of her own stunts as possible. Jolie's approach was to do very few of them, if any. Both movies involve Lara Croft following clues that she hopes will lead to her father while encountering various obstacles and a villain determined to stop her. Whereas Jolie's Croft character was an established Tomb Raider and she could always quickly solve every puzzle she encountered, Vikander's Croft is just beginning this career. It's this stage setting in the beginning of the movie that keeps it a bit slow. This is more of an origins movie like many of the superhero movies these days-how Lara Croft became Tomb Raider. She has no superpowers unless you count sheer determination as one. However, the action sequences in this Tomb Raider feel more real and Vikander's acting makes it a bit more believable in her becoming this action hero. Clearly, the movie arrives as a set-up to further adventures although the lack of sufficient box office might prevent that, this Tomb Raider will still entertain you if you stay with it. I recommend it for Vikander's performance.
63 people found this helpful

AaronReviewed in the United States on June 18, 2018
3.0 out of 5 stars
A watered down version of the 2013 video game.
Verified purchase
Overall it was worth watching. Casting was on point, except Alicia Vikander as Lara. Her acting wasn't bad by any means, and she certainly was believable in her athleticism, she just didn't feel like Lara Croft. This may be from bad writing though, making Lara go from a woman who is in over her head to complete badass warrior in less than 30 minutes. The plot is taken from the 2013 video game, and then they wrote out all parts that made the game interesting. It's missing key characters that made the game so great, as well. This is yet another example of Hollywood taking a great game, trying to write a film for what they perceive as the "average" movie goer, and completely missing the mark.
66 people found this helpful

Kristen CuretteReviewed in the United States on August 14, 2018
5.0 out of 5 stars
Loving the new Lara Croft!
Verified purchase
It's not fair to compare this movie to Angelina Jolie version. The two are totally different, and the new one is pretty refreshing. It shows a strong female, kicking butt in real life adventurous situations & wearing REAL clothes. This movie shows a whole other side of Lara Croft and I personally love it. Alicia Vikander makes an excellent Lara Croft & I look forward to seeing her in more movies.
25 people found this helpful

Antique GirlReviewed in the United States on July 6, 2018
3.0 out of 5 stars
Better A Rental Than A Buy
Verified purchase
The pacing was a little slow at times and some things didn't make a lot of sense like how the main character has as much money as God but is living penniless throughout much of the picture. Then she is beyond smart. I wasn't getting this that she could require an education by delivering takeout on a bike. Still, the one thing that I like that surprised me a great deal was the main character didn't live a charmed existence and didn't win the first time she tried something. I almost fell over witnessing this. The people in charge of Star Wars should be studying this film because everything that has been done wrong with their protagonist could have been fixed by watching this movie.
16 people found this helpful

CNMReviewed in the United States on March 10, 2019
1.0 out of 5 stars
So boring that I couldn't finish it.
Verified purchase
As a long time die hard Tomb Raider Fan (like from back in the 90s when the original Tomb Raider was released), I was excited to see this movie. I wasn't a fan of the Angelina Jolie Tomb Raider movies but Angelina Jolie did nail the character of Lara Croft. Unfortunately, Vikander does not. This movie was based of the amazing 2013 Tomb Raider reboot game but it brings none of the excitement that the game had.

Vikander lacks Lara's charm, charisma, intelligence, and style. She starts the movie as a poor bike courier although she could have a billion dollar company fortune at her disposal because she won't sign papers stating that her father is dead. Then she pawns a pendant given to her by her father for practically nothing. After she arrives on the island of Yamatai, she's taken captive and stands there staring blankly at her captors. I know she's supposed to be young but anyone who knows the true Lara Croft knows that Lara would have had a plan, Vikander just doesn't seem to be able to plan or execute anything.

Ultimately, I couldn't finish the movie due to boredom and the fact that I didn't feel like I was watching a Tomb Raider movie at all.

_tenbatsuReviewed in the United States on July 6, 2018
1.0 out of 5 stars
Not good at all.
Verified purchase
I'm a very big fan of the games. And Lara Croft in general. Although I dont agree they casted the right woman to play Lara, it lacked a lot of excitement. Some of the scenes were bad acting. I can say the musical score to the movie was spot on. I wouldn't compare it to the other Tomb Raider movies. More so the game. And it didnt even touch that. To put it bluntly, if this was for free to watch, I would pass.
16 people found this helpful

Carsten BlackmonReviewed in the United States on November 19, 2018
1.0 out of 5 stars
A horrible, pathetic adaptation. Do not watch.
Verified purchase
While I'd be no good at playing the 2013 Tomb Raider reboot, I saw someone else play it. At first, I thought it was too depressing, but on a second watch, I got into it. It was a wonderful game that balanced action with characters and really made you feel like you were exploring some lost civilization. Didn't like the other games as well, but it is what it is.

So I decided to rent this film and check it out. I'd heard they'd cut out stuff from the game, but I thought I'd still watch it all the way through. Let me tell you, I paid a dollar for it, and I feel robbed.

I only watched like the first 25 minutes of it and then skimmed the visuals ahead, but that was enough to turn me away. They didn't just take out a little, they basically took out EVERYTHING.

For one, Himiko, the Sun Queen, has totally different powers, a different title, and her entire backstory is warped to something more generic. Lara herself is NOT the student of archeology she's supposed to be, not the introverted, skilled but naive girl with a passion for history who you'd believe would stop and appreciate the artifacts you can pick up in the games, and list things about them. She's not even paving her own way and not using her family's money out of a sense of not getting by on title, but because she won't accept her dad as gone.

Lara also sells off her pendant, which I hardly believe she'd do, and said pendant has a totally different context (making me believe her pawning it even less). And really? She could have signed some papers, gotten all her money, and kept her precious keepsake, but she said "nope". Why? Moving plot along, most likely. Though this Lara didn't strike me as very smart.

Want to see all the supernatural monsters on the island? They're gone. Just a trap filled tomb. Want to see a variety of ancient structures to inspire awe? I didn't see the whole movie and I know they're not there.

In fact, it takes the film almost 40 minutes, more than a QUARTER of the run time, to even GET to the accursed island.

Now to be fair, movies that are adaptations are judged on two levels, as a stand alone and as an adaptation. For the former, I can't say with any real expertise. For the latter, it fails spectacularly by taking out everything of worth and interest and twisting the characters in pathetic ways.

I know a LOT of stuff would have needed to be cut for time, but they could have done FAR better than this shell. And really, if it was budget, all I have to say is: If you don't have the budget to pull it off correctly, then don't do it!

albionphotoReviewed in the United States on July 15, 2018
4.0 out of 5 stars
Modern Tomb Raider Games ported to the movie theater - Great action movie.
Verified purchase
The Angeline Tomb Raider films were made in 2001 and 2003. The first was great and the second so-so. The movie series has been given a reboot with Alicia Vikander as the eponymous heroine.
I did not play the original Lara Croft games but have enjoyed the recent ones with the new look Lara. This film takes a lot of cues from the modern Tomb Raider games. The action sequences draw heavily from the modern games. I particularly liked the crashed plane sequence. It feels like a direct port from the games in some places. The plot is decent and the principal actors do a very good job with the material they are given. The preformances of Alicia Vikander and Walter Goggins are exceptional. Goggins carries off the intensity of the main villain very well.
Fans of the original Lara will prefer the Angeline Jolie version. Fans of the modern game will find this familiar and enjoyable.
14 people found this helpful
See all reviews
Back to top
Get to Know Us
Make Money with Us
Amazon Payment Products
Let Us Help You
EnglishChoose a language for shopping. United StatesChoose a country/region for shopping.
© 1996-2022, Amazon.com, Inc. or its affiliates