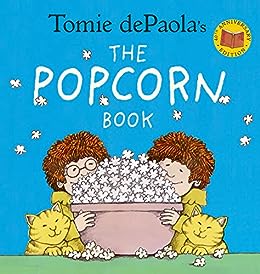 Tomie dePaola was a beloved Holiday House author and artist for nearly fifty years. Tomie’s books include folktale retellings and original stories, informative and historical nonfiction, and books with religious themes. All of them contain his unique sense of color and design, and all of them celebrate the joy he found in the world around us.

Tomie dePaola (1954 - 2020) was the beloved Caldecott Honor- and Newbery Honor-winning author and/or illustrator of over two hundred books, including Strega Nona, Quiet, and The Coud Book. Born in Connecticut, he grew up knowing from an early age that he wanted to write and illustrate stories. Tomie received numerous awards and honors, including the Children's Literature Legacy Award (previously called the Laura Ingalls Wilder Award) from the American Library Association for his "substantial and lasting contribution to literature for children," the Smithson Medal from the Smithsonian Institution, the Regina Medal from the Catholic Library Association, and the Kerlan Award from the University of Minnesota for his "singular attainment in children’s literature." He was nominated for the Hans Christian Andersen Award in illustration and received the New Hampshire’s Governor’s Arts Award of Living Treasure.

"First published in 1978, this 40th anniversary edition updates the depictions of Indigenous people and expands upon the presentation of historical facts . . . cleaner and brighter, with more saturated colors and modern type . . . This version does a good job of including more Native Nation-specific facts about popcorn and its preparation . . . Readers familiar with this book will delight in a fresher-looking version"—Kirkus Reviews

Tomie dePaola is the beloved Caldecott Honor- and Newbery Honor-winning author and/or illustrator of close to 250 books, including Strega Nona and Quiet. Tomie was born in Connecticut and grew up there with his parents, brother, and two sisters. He loved reading and books from an early age and knew, when he was four, that he wanted to write and illustrate stories when he grew up. Tomie is the recipient of numerous awards and honors, including the Laura Ingalls Wilder Award from the American Library Association for his "substantial and lasting contribution to literature for children," the Smithson Medal from the Smithsonian Institution, the Regina Medal from the Catholic Library Association, and the Kerlan Award from the University of Minnesota for his "singular attainment in children's literature." He was nominated for the Hans Christian Andersen Award in illustration and has received the New Hampshire's Governor's Arts Award of Living Treasure. --This text refers to the paperback edition.

4.6 out of 5 stars
4.6 out of 5
186 global ratings
How are ratings calculated?
To calculate the overall star rating and percentage breakdown by star, we don’t use a simple average. Instead, our system considers things like how recent a review is and if the reviewer bought the item on Amazon. It also analyzes reviews to verify trustworthiness.
Top reviews

G
5.0 out of 5 stars Adorable, fun book! Get the popcorn ready!
Reviewed in the United States on July 2, 2019
Verified Purchase
This book is super cute and packed full of information on popcorn, some that even I didn’t know! Popcorn soup!? My 6 year old was so entertained and of course wanted to go pop some popcorn while we read it, so have some on hand and make it a fun popcorn event! It even has some recipes in the back for making popcorn!
Read more
2 people found this helpful
Helpful
Report abuse

SDref
4.0 out of 5 stars Good classic
Reviewed in the United States on February 8, 2020
Verified Purchase
I remember this book from my own childhood. I bought it to add to my child's book collection. It's a little long and dry right now, but I'm sure it will be loved in the years to come! Especially if it's read while making or eating popcorn!
Read more
Helpful
Report abuse

Samon
5.0 out of 5 stars You can't go wrong with a gift book by Tomie dePaola!
Reviewed in the United States on January 9, 2020
Verified Purchase
Got our 3 great nieces and nephews each a book by Tomie dePaola for Christmas. He was one of our son's favorites as a child. His illustrations are fun and he has a unique style.

His books are "keepers!" You want to save them long after childhood ends!

Mr. J D
4.0 out of 5 stars Great book with a minor error
Reviewed in the United States on January 11, 2019
Verified Purchase
Popcorn should not be kept in the refrigerator. Only in the pantry in a tightly sealed container. Fix that error in the book and you've got yourself a winner!
Read more
Helpful
Report abuse

Susanne F. Gagnon
5.0 out of 5 stars Great Book!
Reviewed in the United States on February 1, 2020
Verified Purchase
Love this book as well as my 1st and 2nd graders! I read it every Thanksgiving🦃
Read more
Helpful
Report abuse

Lexiecat
5.0 out of 5 stars Great book for popcorn lover
Reviewed in the United States on February 4, 2021
Verified Purchase
This was a Christmas gift for our 7 year old grand-daughter. She LOVES popcorn and very much enjoyed the history of her favorite snack.
Read more
Helpful
Report abuse
See all reviews