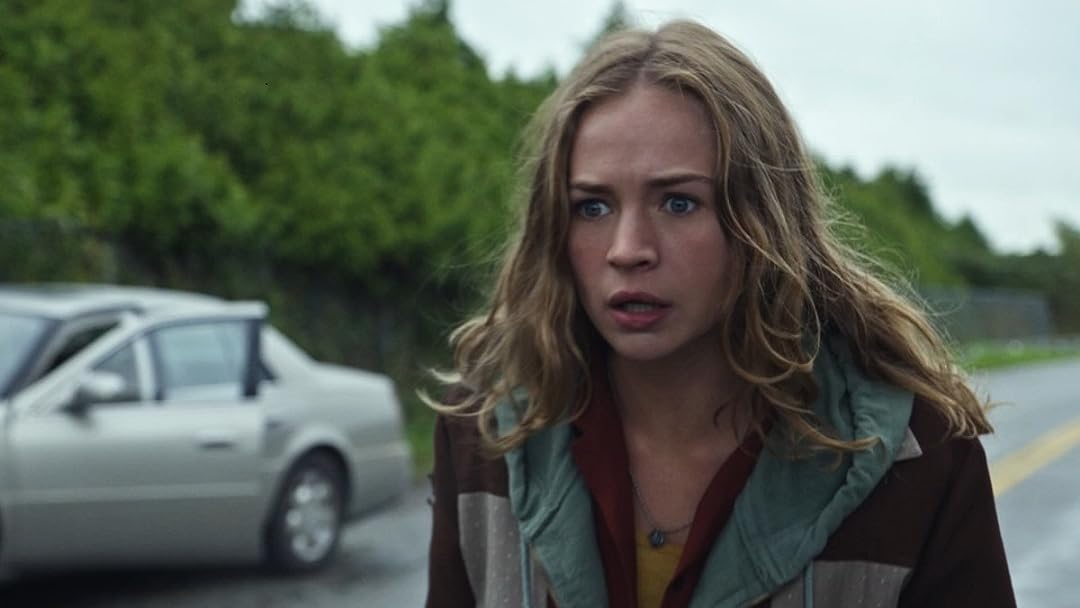 PeonyGal212Reviewed in the United States on October 11, 2017
5.0 out of 5 stars
Such a terrific movie -- a fun and poignant ride!
Verified purchase
I love this movie so much, and am both surprised and not surprised that there wasn't more buzz about it when it was in the theatres. The acting was terrific (I'm such a Britt Robertson fan now!), I still laugh out loud on repeat viewings as the dialogue is so strong, and Hugh Laurie's monologue at the end gets me every time. On top of all the awesomeness, the message at its core is that we each have a role to play in the future of our world — which, IMHO, makes this movie required viewing for kids and adults alike. Two thumbs very enthusiastically up.
41 people found this helpful

Ms. DivaliciousReviewed in the United States on January 18, 2021
5.0 out of 5 stars
Hopeful and Inspiring Surprisingly GREAT!
Verified purchase
I saw this movie advertised years ago and I scrolled right past it because I had no idea what it was about and I wasn't curious. Recently someone told me that they saw it and they said that it was an amazing movie. They, however, gave me very few details as to not give away anything relevant. I decided to rent Tomorowland and I must say I was pleasantly surprised, so much so that now I am going to buy the movie! Believe it or not this movie ranks right up there with The Matrix and a few of my other favorite movies that I must watch at least once a year. Tomorrowland awakened the optimist that lie dormant inside of me for too long.

If you want to feel good after a movie ends, and you want to remember that hopeful and happy place that usually only exist in children, this movie is for you. I'm still smiling and excited to own a copy so that I can rewatch it whenever I need a dose of hope.

H.M. ElMostritoReviewed in the United States on December 28, 2021
3.0 out of 5 stars
100% children's movie with a balance of Mary Sue wokeness and deep message.
Verified purchase
Safe for children.
Minimal blood (aside from a brief quick healing nosebleed). Children with average IQs might not even notice people getting murdered left and right thanks to the advanced and highly effective weaponry used that would disintegrate its targets into a puff of ash. In fact, the movie goes out of its way to remind you who it's made for by avoiding any sense of realism and take young minds in a captivating beautiful journey into a mesmerizing beautiful world only the best strain of weed can make possible in the mind of a grown adult.

The Mary Sue saves the world
Main actress is zero depth and perfect in every possible way. In fact, if it weren't for a quick nosebleed, the movie offers zero clue that she's human. It's un-ironic how the movie's producer turned down an offer to be involved in Disney's version of the Star Wars franchise, which was responsible for taking the concept of Mary Sue to unprecedented levels. Now, for those of you reading this who probably missed the times the movie went out of its way to make it blatantly obvious that she is the definition of perfection, are probably wanting of some evidence to prove my point. If this is the case I cannot help you. But if you did notice I'll add that you probably missed that it would take an absolute genius to make a UAV out of a Blade 300X that not only you can control with a smartphone app, but a curious bystander can just snatch away from mid air without risking losing half of his face or at least, getting his fingers severely damaged. I must admit, the fact that I know this makes me as much as an Aspbergers type than makes her character a Mary Sue.

The deep philosophical message
Whether by accident or genius intent, the movie pulls off subtly offering a deep, timeless philosophical message about free will and media's influence on people, while providing the woke crowds the satisfaction that Hollywood has put out yet another climate change awareness lesson driven almost exclusively by need-no-man girl power, if it weren't for its fully disposable male counterpart.

Conclusion
It's not very common when Hollywood puts together such a brilliant level of misdirection. It simultaneously feeds polar opposite crowds, keeping each busy watching one hand while doing something different with the other, and it does all of this in a package made for children and, at face value, by children.

alistairvilleReviewed in the United States on May 3, 2019
5.0 out of 5 stars
A movie aimed at young adults which is engaging for adults also.
Verified purchase
So this is a Young Adult movie (a YA), but actually, it is also interesting and engaging for adults for the most part. YA generally means plot-driven not character-driven, so, don’t expect a whole bunch of character development, (unless you love disappointment), but even so, this movie really works. All the lead actors work well together. George Clooney is a real bonus, but what is amazing is how giving he is to other actors the scenes he’s in. I guess he is George Clooney - and he’s one of Hollywood’s stand outs. But t, the art direction is also wonderful, as is the direction, plus the CGI sets. Good costuming, lighting, and the writing is engaging - even though the finale is not what one might have hoped for - but honestly, it so I frequently is. This movie is worth your time and watching it will not make you regret the time you spent on it. And for those who need religious and whatnot reviews - I don’t recall one piece of off-colour language and there were no mentions of Gods or, whatever religious people think of as non-gods.
9 people found this helpful

joel wingReviewed in the United States on November 20, 2021
4.0 out of 5 stars
A story about hope for the future
Verified purchase
I was completely skeptical about this movie when I heard about it. How could they forge an entire film based upon one of the “lands” from Disneyland? I was happily surprised by this great family sci-fil story. It focuses upon Britt Robertson who is concerned about the planet and wants to find solutions. Her hope holds the future. She hooks up with George Clooney who is a cynical old man. They make the perfect duo. The story is full of wonder, adventure, creativity, excitement and surprises. It really will inspire you.
4 people found this helpful

Lord-XanthorReviewed in the United States on April 4, 2022
5.0 out of 5 stars
How family movies should be made. Thought this type of magic long lost!
Verified purchase
Why is it the best of movies, are the ones that get poor advertising? This movie has the same type of magic, ET had for me in the 80s, and thought this type of writing was long lost! Glad I'm wrong, as this turned out to be a very beautiful family movie, one of the few my entire family enjoyed watching together!
So how could a movie like this, made by Disney, not be known about? I haven't looked at the publishing date, so can't blame the pandemic, yet!
How did I find out about it? I was watching one of my favorite posters on YouTube, and after watching movie recaps kicked in. I was about to stop it, when the interesting clip played of a child being released from a police station, caught my attention. Why was she there in the first place, and where was her parents? If that wasn't enough to get ones attention, the next thing did. She complains to the officer, that a pin in her belongings isn't hers, and as she touches it, is suddenly thrown into a new world with a futuristic city. How the heck can a mere pin do this? I wasn't about to finish watching the recap and ruin it for me, I ran right to Amazon and took a risk buying it. Well worth the risk as Im watching it for the second time.
Gist of the story, all of mankind is supposed to be wiped out in days, yet one child can stop it all, and of course, there are people who want mankind gone, who are out to kill this child.
Few good actors in this movie too! Hugh Laurie aka Doctor House, who plays the same type of miserable man in this film, minus the Vicodin popping. George Clooney, wow, would have been an interesting cross over had this been the two shows combined, but heck, the movie is just as good even better! Movie is 2015, so Pandemic had nothing to do with it not being known, at least to me. Well blame it on bad advertising, since In 2015, didn't even see a preview. Most likely the actors name them selves were the selling point?
Don't trust the movie counter, all the bonus content is after the movie, but counter doesn't reflect this. Not sure why they just didn't add it as bonus content you can view in the list, you just need to find it. You may need to reload the player as again the counter won't display the extra content till the film is first started, so remember where you left off.

ZacharyReviewed in the United States on January 21, 2018
5.0 out of 5 stars
Great Modern Disney Movie
Verified purchase
Really cute movie. Casted perfectly in my opinion. George Clooney, Hugh Laurie, Britt Robertson, and all the others really sold it. This was instantly a household favorite for us and we got it for a great price with the Blu-Ray, DVD, and Digital copy all included so now everyone has it available on their tablets and whatnot when we are on longer drives and entertainment is needed. Definitely recommended.
12 people found this helpful

H. M. HadleyReviewed in the United States on February 25, 2022
3.0 out of 5 stars
Too much violence to make it family friendly
Verified purchase
I started out liking the premise behind this movie, that those who have potential to change the future are invited to a secret city where their ideas and inventions can influence the world they left behind. However, after a promising beginning, the movie got darker and the amount of physical violence among the main actors--toward each other and those who were pursuing them--was just too disturbing and disappointing. It ended up being a chase movie, with people being shot, beaten up, and lots of things exploding. As a result, the message of hope for the future of the planet just didn't have an impact at the end.
See all reviews
Back to top
Get to Know Us
Make Money with Us
Amazon Payment Products
Let Us Help You
EnglishChoose a language for shopping. United StatesChoose a country/region for shopping.
© 1996-2022, Amazon.com, Inc. or its affiliates