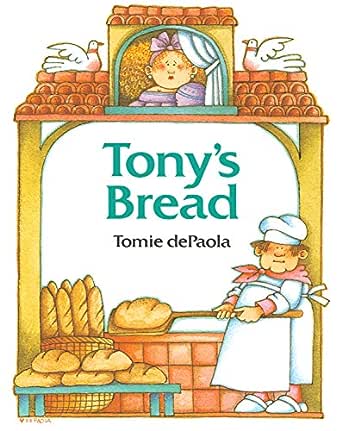 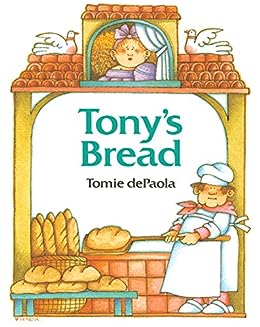 Tomie dePaola was born in Meriden, Connecticut, in 1934 to a family of Irish and Italian background. By the time he could hold a pencil, he knew what his life's work would be. His determination to create books for children led to a BFA from Pratt Institute in Brooklyn, New York, and an MFA from the California College of Arts & Crafts in Oakland, California.

It drove him through the years of teaching, designing greeting cards and stage sets, and painting church murals until 1965, when he illustrated his first children's book,Sound, by Lisa Miller for Coward-McCann. Eventually, freed of other obligations, he plunged full time into both writing and illustrating children's books.

He names Fra Angelico and Giotto, Georges Rouault, and Ben Shahn as major influences on his work, but he soon found his own unique style. His particular way with color, line, detail, and design have earned him many of the most prestigious awards in his field, among them a Caldecott Honor Award for Strega Nona, the Smithsonian Medal from the Smithsonian Institution, the Kerlan Award from the University of Minnesota for his "singular attainment in children's literature," the Catholic Library Association's Regina Medal for his "continued distinguished contribution," and the University of Southern Mississippi Medallion. He was also the 1990 United States nominee for the Hans Christian Andersen Medal for illustration.

Tomie dePaola has published almost 200 children's books in fifteen different countries. He remains one of the most popular creators of books for children, receiving more than 100,000 fan letters each year.

Tomie lives in an interesting house in New Hampshire with his four dogs. His studio is in a large renovated 200-year-old barn.

Tomie dePaola has received virtually every significant recognition forhis books in the children's book world, including:

copyright © 2000 by Penguin Putnam Books for Young Readers. All rights reserved. --This text refers to the paperback edition.

How did panettone , the rich Italian Christmas bread, get its name? With tongue firmly in cheek, dePaola provides this confection as a reply. Chubby Serafina, the baker Antonio's daughter, spends her days eating candy and weeping by the window. For although her father adores her and gives her the best of everything, Tony is convinced there is no man worthy of her. Then Angelo, a wealthy nobleman, falls in love with Serafina and enlists the help of three meddlesome "aunties" to win her father's approval. In return for Serafina's hand in marriage, Angelo sets Tony up in his own bakery in Milano, where he becomes wonderfully rich and famous from sales of an unusually shaped bread: pan di Tonio , or panettone . The tale is a typically charming dePaolian effort, and the illustrations abound with his trademark coziness. Another nice touch: like Tony's currant-filled buns, the story is sprinkled with Italian words and phrases, translations of which are cleverly woven into the text. Ages 4-8.
Copyright 1989 Reed Business Information, Inc. --This text refers to an out of print or unavailable edition of this title.

4.7 out of 5 stars
4.7 out of 5
58 customer ratings
How does Amazon calculate star ratings?
Amazon calculates a product’s star ratings based on a machine learned model instead of a raw data average. The model takes into account factors including the age of a rating, whether the ratings are from verified purchasers, and factors that establish reviewer trustworthiness.
Top Reviews

Laura Rounds
5.0 out of 5 stars Great book!
Reviewed in the United States on April 22, 2019
Verified Purchase
I bought this for my preschoolers when we were doing a cooking unit. They really liked the book. The story is great and so are the illustrations. Great author!
Read more
Helpful
Comment Report abuse

Davis
5.0 out of 5 stars Another Great Tale
Reviewed in the United States on June 21, 2019
Verified Purchase
This is another charming tale from Mr. dePaola about the creation of panettone, Tony's Bread. My kids love reading these stories as much as I love reading them.
Read more
Helpful
Comment Report abuse

Happy Homemaker
5.0 out of 5 stars Another sweet Toni book!
Reviewed in the United States on June 4, 2020
Verified Purchase
A nice story about sticking to your task and getting better and better. He held to his dream and it came true!
Read more
Helpful
Comment Report abuse

H-A
3.0 out of 5 stars Good
Reviewed in the United States on May 8, 2019
Verified Purchase
Not so bad story, I thought it would talk more about the bakery,
Read more
Helpful
Comment Report abuse

Mary G
5.0 out of 5 stars great Christmas book
Reviewed in the United States on February 6, 2007
Verified Purchase
This book, by the crative genious of Tomie dePaola, really is a wonderful read for the Christmas season. The story is the legend of how panetonne, the Italian Christmas bread, was created by a baker in Italy.

Resplendent with dePaola's signature style drawings and a good, readable text, this book will be one we'll go to every year for Christmas -- and of course, make panetonne for the family afterwards!

lovethatmonk
5.0 out of 5 stars Fun to read to family
Reviewed in the United States on December 17, 2017
Verified Purchase
Wonderful book. I read it to my family just before serving panettone. They were both huge hits 😊
Read more
Helpful
Comment Report abuse

Susan Ralich
5.0 out of 5 stars Big hit at 2nd Grade Read Aloud
Reviewed in the United States on January 18, 2014
Verified Purchase
When the pressure is on to choose the right book for 2nd grade Read Aloud, "Tony's Bread" came through with flying colors. Add a loaf of fresh warm bread with honey, and your child automatically becomes the kid with the cool mom.
Read more
2 people found this helpful
Helpful
Comment Report abuse
See all reviews from the United States

Margaret
5.0 out of 5 stars Folktale for the holidays
Reviewed in Canada on December 13, 2018
Verified Purchase
Love this book and others in the series. It was a favourite of mine as a kid and now I buy these books for all the nieces and nephews at Christmas time. This particular book is the folktale of the invention of Panettoni, an italian Christmas bread so it's especially appropriate around the holidays. This book and a Panettoni (about $6 in most grocery stores around Christmas time) makes a great host gift if you're visiting family/friends with kids this time of year. They can read the story and try the treat (the bread is delicious!)
Read more
Helpful
Sending feedback...
Thank you for your feedback.
Sorry, we failed to record your vote. Please try again
Report abuse

GiordanaT
5.0 out of 5 stars Love!
Reviewed in Canada on September 25, 2018
Verified Purchase
What a great book! Love this series!!
Read more
Helpful
Sending feedback...
Thank you for your feedback.
Sorry, we failed to record your vote. Please try again
Report abuse

mary
5.0 out of 5 stars My kids loved it
Reviewed in Canada on January 18, 2019
Verified Purchase
Great book
Read more
Helpful
Sending feedback...
Thank you for your feedback.
Sorry, we failed to record your vote. Please try again
Report abuse