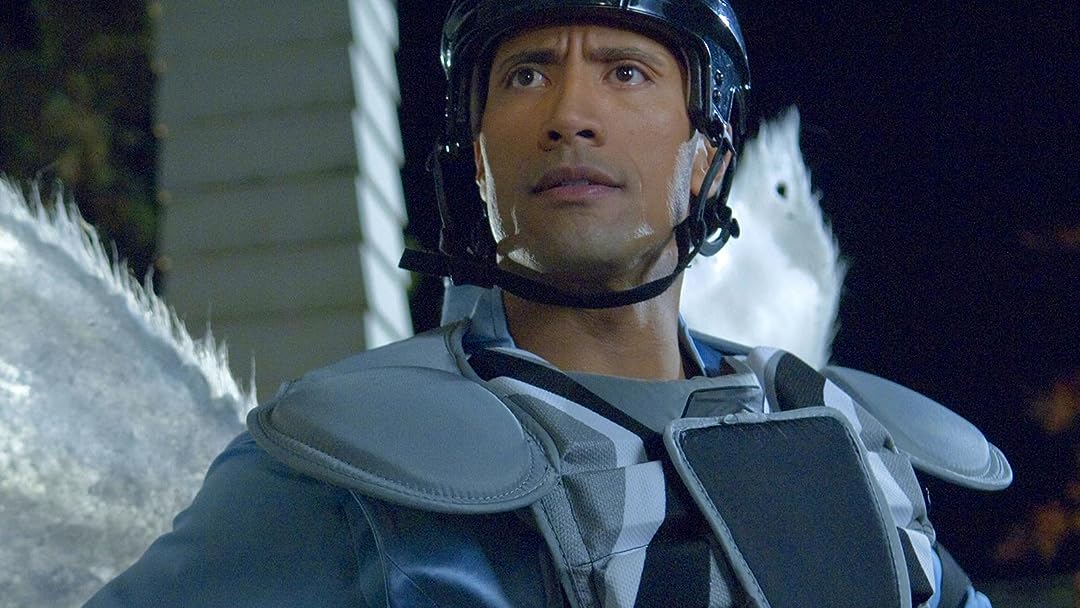 (4,877)
5.01 h 41 min2010X-RayPG
A bad deed on the part of a tough minor-league hockey player (Dwayne Johnson) results in an unusual sentence: he must serve one week as a real-life tooth fairy.

abishaReviewed in the United States on March 13, 2019
5.0 out of 5 stars
That this movie was so clean. The Lord's name was not used once and no swearing.
Verified purchase
I liked everything about this movie so much that when the neighborhood kids come over and want to watch it I watch it with them.
18 people found this helpful

HBReviewed in the United States on June 7, 2018
5.0 out of 5 stars
Fun
Verified purchase
Really funny movie. The whole family enjoyed it. HOWEVER, be warned that it starts off with the main character saying the tooth Fairy isn't real, etc. It comes full circle (that the Tooth Fairy is definitely real), but I was caught a bit off guard.
21 people found this helpful

J. P.Reviewed in the United States on January 6, 2022
2.0 out of 5 stars
Disappointing for me – Dwayne, flash that comedy!
Verified purchase
I really enjoy watching Dwayne Johnson films. He usually packs a fun comedic balance in his roles. This film sounded like it would be funny and cute. It fell very short of my expectations. The plot was hallow and boring for me. The comedy came up flat. I don't think Mr. Johnson had yet found his comedic groove in this film.

Sometimes, you can watch "stars'" early films and see that they hadn't yet nailed the persona that would make them super stars. An interesting example of this is Carole Lombard. Check out her early films just for fun. She seemed to be trying to be a "heavy femme fatale." Her fun zany character that we all would come to enjoy was a few years down the road.

So for me, Tooth Fairy isn't one of Dwayne Johnson's best films. I think in this film, he was still playing too heavily on the body-builder tough guy. He broke through (for me), when he brought more comedy to his characters. He was starting here in this film, just too much tough guy and not enough of his comedic genius. Also, the script and some of the casting choices were not the best.

Leslie HReviewed in the United States on May 18, 2021
5.0 out of 5 stars
Totally funny and playful movie!
Verified purchase
This is refreshing and creative. The actors even seemed to be having fun. No death, no sexually inappropriate scenes or words, no satanic demonic crap. Wow, the actors had to depend on their acting skills and the script. I am impressed at the decency of this movie. I would have loved to hear more music! So hands clapping to this movie. Why are there not more fun movies like this? Enjoyment for the whole family!
6 people found this helpful

kbReviewed in the United States on April 13, 2020
1.0 out of 5 stars
False advertising. Digital copies are expired.
Verified purchase
I bought this for my 9 year old and he loves the movie. My complaint is I purchased the bluray+dvd+digital. When I received the movie the and tried to redeem the digital copy it was expired. I contacted Foxcustomer support and they said, sorry its expired. I did not get what was advertised, but I am not going to return the movie because my son likes the movie. Very disappointed. This is the second time I've purchased a bluray+dvd+digital from amazon and ended up with the digital copy being expired and not redeemable. False advertising is very frustrating.
6 people found this helpful

MaryReviewed in the United States on March 30, 2022
2.0 out of 5 stars
Why So Many 5-Star Reviews?
Verified purchase
I think that people simply gave this movie 5-star reviews because of the star-studded cast. Truly impressive cast; however, the movie itself, I give 2 stars. Just super duper odd seeing "The Rock" in a fairy outfit while also a brute hockey player. Just doesn't work together. It's too. . . out of place. The plot was okay, but. . . naw-aw-aw-way. Cheezy film. The best character to me was the little boy who wanted to be a rock star. I gave the movie 2 stars because (and only because) the cast was star-studded and gotta love a Hallmark Channel type of move (to some extent). Too, not a fan of believeing in the tooth fairy. I get the nurturing of fantasy and dreaming of goals too, but. . . the tooth fairy as a savior of fantasy and dreaming. . . come-mon. If I had a child, I wouldn't leave a dollar or money for a tooth. I think it is a bizarre tradition that many parents do for their children anyway.

PearlReviewed in the United States on July 24, 2013
5.0 out of 5 stars
The preview wasn't even the best part!!! :)
Verified purchase
I have to admit it. I'm old. Really. Maybe I'm closer to my 2nd childhood than I thought but after seeing the previews a couple of years ago I've been trying to find this movie to rent or buy, but no matter where I've gone, the stores have been out of it. Damn disappointing, truth be told!

I've had to be content with watching the previews and trailers over and over and over again, so imagine my delighted surprise when, halleluiah, lo' and behold, 'go tell it on the mountain!', one day I checked Amazon Video on Demand and there it was....THE TOOTH FAIRY!! WOOHOOO!

Now I love Dwayne Johnson, no matter what he does (Game Plan: sweet and funny, Grid Iron Gang: a bittersweet tearjerker from the get-go...Rundown, Walking Tall, Scorpion King or Race to Witch Mountain). But Tooth Fairy...omg! It's hilarious!

Dwayne's character, Derek Thompson, is a rather cynical minor league hockey player with a rep for bashing any opposing team's players so hard that he invariably knocks out a tooth...or teeth, earning him the nickname, "The Tooth Fairy". His cynicism gets him into trouble off the rink, though, when he almost destroys his girlfriend's little daughter's belief in the tooth fairy by stealing the dollar bill her mother left under her pillow and very nearly telling the little girl that the tooth fairy isn't real - of course 'mom' hastily interrupts and saves the day.

Derek is an idol and role model to many little aspiring junior league hockey players...and he has a consistent habit of crushing their dreams with that subconscious bitterness he carries at being dropped from the major league, basically telling them that there will always be someone out there "that's better than you; you'll never make it; just be happy with your mediocre little life" (sic). Quite frankly, Derek is a jerk. A handsome jerk with a beautiful smile but a jerk nonetheless.

One night, Derek finds a summons under his pillow that orders him to appear before the REAL tooth fairy. All of a sudden he "sprouts wings and flies", transported to the magical fairy realm, arriving in a pink tutu and ballerina slippers (REALLY?! "The Rock" in a tutu? PINK, no less?!!)...WHAAAT?

...and from there the movie is just one hilarity after another as he fulfills his two week sentence of having to become a real tooth fairy and pay his debt for being a "dream crusher".

Of course, at first he's miffed at the whole idea but, as is wont with a good movie, the lesson is there to be learned: get off your high horse, humble yourself, look around and help, rather than hinder, the people who look up to him. He slowly opens his eyes to his faults and actually sees the effect he has had on the innocent.

It takes awhile, there are setbacks, but he eventually faces his own disappointments and comes to term with his life. In short, he has an "Ebenezer moment" when he unloads his excess baggage and becomes a great man.

His short career as a real live tooth fairy comes full circle, from rebellion to grudging surrender, to enjoyment and all the way to embracing the magic.

All from starting out in a pink tutu, Dwayne?

That man looks good in anything!

DragonWenchReviewed in the United States on July 5, 2010
5.0 out of 5 stars
Family fun...with a side of wings.
Verified purchase
Okay, so is this Oscar-caliber material? No. Is this a post-modern look at our society and the role of parental figures? No. Is this an indictment of a society which relies on consumerism and marketing to carry out our obligations? No. Do I have any idea what the prevous two questions actually mean? Most definitely no. This is, however, a movie in which a hockey player, Derek Thompson (Dwayne Johnson, he of the bulging muscles), dresses up in tights and a tutu and sprouts wings from his back. In other words, it's a cute, inoffensive film, clearly meant to appeal to small children and those adults who can shut off their logical brains for a couple of hours, sit back and enjoy all the pretty colors. While some of the dialogue is cringe-worthy and some of the moments of hilarity a bit forced, all-in-all it's never better or worse than what it set out to be.

We get the familiar story of a man, Derek, who's bitter and selfish, who's had his dreams taken away and because of it, discourages those around him (read: kids) from dreaming big, because all they'll get for their troubles is disappointment. Even worse, Derek tells his girlfriend's kids that there is no such thing as a tooth fairy. In retaliation, he gets a summons for Tooth Fairy duty. Once it's beaten into his head that the summons (along with the above tights, tutu, and wings) is, in fact, not a dream, he becomes the worst tooth fairy in history. It takes a severe dose of humility (provided by the always-lovely Julie Andrews) and a bit of "I'll do it my way" determination to reawaken the hope and magic hidden away in Derek. The kids are happy, the romance is saved, and the big finale goes off with a bang. What more could you ask for?
6 people found this helpful
See all reviews
Back to top
Get to Know Us
Make Money with Us
Amazon Payment Products
Let Us Help You
EnglishChoose a language for shopping. United StatesChoose a country/region for shopping.
© 1996-2022, Amazon.com, Inc. or its affiliates